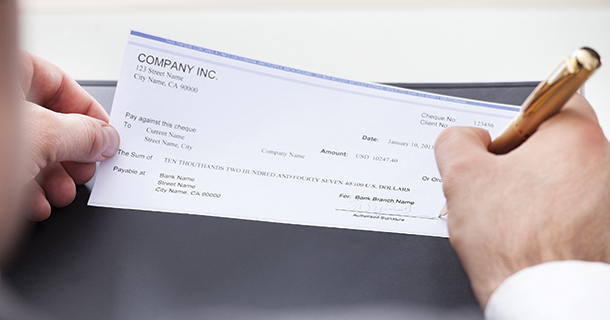 On Saturdays around 7 a.m., before he goes to the gym, Ken Goldman sits on the couch with his laptop and pays household bills online. It takes about five to 10 minutes.

On weekdays, however, he goes to work at Black Duck Software Inc., an international consulting firm with $50 million in sales. Twice a month, a staff accountant comes to his office with a stack of about 50 checks and it takes Goldman about half an hour to sign them all with a pen.

“In this day and age it doesn’t make sense,” said Goldman, the 200-employee company’s chief financial officer. “It’s like sending a letter when there’s email.”

A growing number of consumers don’t hesitate to buy a cup of coffee using an iPhone, bid for a dress on eBay and pay for it via PayPal, or purchase a sofa on OverStock.com with virtual bitcoins. But for American businesses, the old-fashioned paper check remains the preferred payment method.

Businesses in the U.S. still pay half of their bills by check, according to a September survey by the Association for Financial Professionals. That’s down from 74 percent in 2007, but the rate of decline has slowed, suggesting stubborn barriers to change.

“Businesses know the check system works. It’s been around for a long time, and they feel very comfortable with it,” said Magnus Carlsson, a manager at the trade group.

That comfort comes at a price. Bank of America estimates that a business check can cost an aggregate of $4 to $20, based on the price of the check and shipping, plus the time employees spend writing, mailing, collecting and reconciling the check. “It takes a lot of work,” said Rodney Gardner, head of receivables for Bank of America Merrill Lynch.

And while it’s easy to drop a check in the mail, checks are a burden on the economy. Simply issuing and depositing checks cost U.S. businesses between $26 billion and $54 billion in 2010, according to MineralTree Inc., an electronic-payments company.

U.S. companies lag far behind their counterparts in Europe, Japan and even Brazil in the world of e-payments. American businesses and consumers wrote 21 billion checks in 2012, according to the Federal Reserve. That’s more than four times as many checks as were written that year in the European Union’s 28 member countries, according to the European Central Bank.

Some major U.S. companies have embraced e-payments. General Motors Co., which has major manufacturing operations in the U.S. and Europe, pays just 15 percent of its bills in North America by check, compared with less than 10 percent in Europe.

Nevertheless, Goodyear Tire & Rubber Co. pays more than half its invoices with checks, even though it estimates that the cost of writing a check is as much as five times that of an e-payment. Checks are the only form of payment easily accessible to all of Goodyear’s business partners, said Keith Price, a company spokesman.

For some companies, the inefficiencies of sending checks through the mail have financial advantages. Michael Brown, finance director of drug developer DNJ Pharma Inc., said the extra time it takes for a bill payment to make its way through the postal system gives the company a few extra days of liquidity, helping to manage short-term cash needs.

“We get to earn interest on that money until it clears,” he said. Although interest rates are negligible now, any boost in the future will only increase the advantage of that strategy, he added.

Checks also remain popular with U.S. companies because they are easy to use. They became ubiquitous in the early 20th century. A relatively efficient postal system carried them across the country in just a few days, and the Fed’s centralized check-clearing system allowed the money to move easily between accounts across a patchwork of thousands of banks.

Even today, checks can make life easier for corporate treasurers because they contain more information than many e-payments, allowing businesses to quickly match payments and invoices.

E-payments, such as wire transfers or payments through automated clearing houses, don’t always include invoice details. Companies can hire banks to do the matching for them, or invest in expensive software and back-end systems to reconcile the payments.

In September, the Fed asked for public comments on ways to encourage e-payments. The central bank noted that other countries have jumped ahead in creating real-time e-payment systems, especially via mobile devices, and the U.S.’s continued reliance on paper checks hobbles its global competitiveness.

The Fed’s appeal attracted almost 200 comments, with many arguing for direct government intervention to limit check use.

The U.S. government already has taken small steps to promote e-payments. A law passed in 2003, for example, allows banks to accept electronic checks, a move that saved $1.16 billion in 2010, according to research by the Federal Reserve Bank of Philadelphia.

But the Fed doesn’t have the authority to recreate the U.S. payment system, something the EU did in 2012 with its Single Euro Payments Area regulation. Years before, several European countries, including Germany, Belgium and Sweden, had nearly abandoned checks.

“In much of the rest of the world, central authorities are more willing to mandate changes like in Europe. In this market, Congress has been less of a mind to say the banking industry must use this standard,” said Claudia Swendseid, a senior vice president at the Federal Reserve Bank of Minneapolis.

She expects that change in the U.S. system will likely come from the bottom up, as more people use e-payments in their daily lives and expect the same speed and convenience from businesses.

“The market is certainly moving in the direction of fewer checks,” she said.

Goldman, the finance chief of Black Duck Software, can’t wait. He has been CFO at eight companies over 33 years. “I have literally signed tens of thousands of checks in my career. I’d like to stop doing that,” he said. “My hand hurts.”