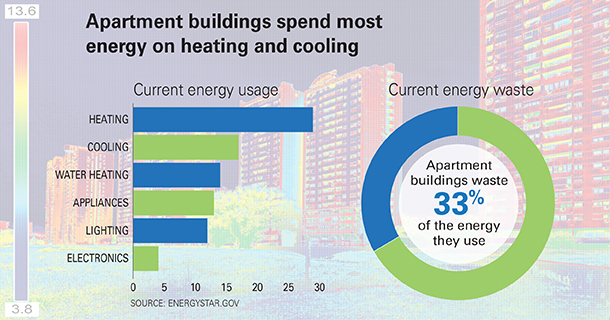 Given the drag higher energy costs can have on net operating income, more multifamily owners and managers are zeroing in on reducing energy use at their properties. But beyond just reducing costs, more companies are seeing better energy management as a strategic business initiative—one that can improve properties’ value and marketability to investors and residents.

“There’s a clear business case for improving energy performance in multifamily buildings.,” said Lee. “But structural hurdles like submetering and limited access to whole-building energy data have been major impediments to benchmarking which is a first step in performance improvement. Is anything changing on that front?”

“In the last five years, more and more utilities are making whole-building energy data available to property manager and owners, though in most of the country it still remains unavailable,” said Zatz. “Most of the utilities offering this service are doing so in conjunction with mandatory energy benchmarking and disclosure laws that are being passed in numerous cities, countries and states, such as New York, San Francisco, Boston, Chicago, Seattle, Philadelphia and Washington, D.C. But we’re also seeing it in smaller cities like Boulder, Colo., Cambridge, Mass., and Berkeley, Calif. So, as the laws have changed, more multifamily data has become available because people who weren’t measuring energy performance before are now required to do so.”

“What people often don’t realize,” Zatz said, “is that when a utility begins offering whole-building data in conjunction with a benchmarking mandate, they typically offer that data to all customers across their entire service territory making building data available in other jurisdictions. So, a lot of multifamily owners might think they don’t have access to critical benchmarking data when they actually do.”

Most owners and operators simply aren’t aware that they can access such data. “How do they figure that out?” Lee asked.

“Over the summer, EPA launched a new online tool that maps where energy benchmarking data is now available,” said Zatz.

Once on the site, (energystar.gov/utilitydata) owners and managers enter the zip code for the property they’re interested in benchmarking and they will be advised whether energy data is available for that location. If data is available, it will provide the contact information and link to the appropriate utility’s website.

“Anecdotally,” said Zatz, “we’ve heard that a number of NMHC 50 firms were surprised at how much more data is available for the properties in their portfolios. And these are companies who have benchmarked for a while.”

“Companies are still benchmarking even if they don’t have full data access,” said Lee.

“Absolutely,” replied Zatz. “The important thing is to start gathering and benchmarking whatever data you have. Obviously, the more data you have, the more savings you can affect.”

Most property apartment operators only have the data for their property’s common areas, and Zatz says that’s okay. He encourages owners and operators to collect what data they do have in order to create a baseline on performance, assuming the property has yet to begin to track consumption. Owners and operators need at least a year of data in order to use EPA’s Portfolio Manager tool for performance benchmarking and it’s never too late to begin.

“What are multifamily firms doing to improve energy efficiency at their communities?” asked Lee.

“Whether you’re a large or small firm, there are always things that can be done to conserve, and promote conservation to residents,” said Zatz. “Changing out lighting is the simplest. In some cases, operators can reduce energy usage by as much as 90 percent. That’s guaranteed savings with quick payback. Plus, today’s super energy efficient lighting options have long lives so that means less time and cost associated with replacing bulbs.”

It’s not just about investment and upgrades. There are plenty of low-cost or no-cost ways to improve energy performance, he said. It can be as simple as changing air filters more frequently and caulking leaky windows and doors. It begins with doing a walk-through on your property to make sure things are working properly.

Zatz says there are even greater performance leaps to be made if property operators are able to work with residents for even better performance.

“If you can find a way to get residents to report problems promptly, you can address it quickly—as opposed to going days, weeks or even months without knowing you have a leaky faucet or toilet in unit 302, for example. These seemingly small things can add up to big savings over the course of an entire property and as energy prices rise.

“This fall we’ve launched our 7th annual National Building Competition (energystar.gov/buildingcontest),” said Zatz. “This year’s competition is dubbed Boot Camp and targets resident engagement. We gave participating buildings a package of co-brandable materials to help them engage their residents. They then competed to see which buildings were able to reduce energy usage over a three-month period. We’ll be making that package of resources available to everyone via our website in early 2017.”

According to the 2015 NMHC/Kingsley Associates Resident Preferences Survey, 75 percent of apartment residents said they were interested, or very interested, in contributing to their communities’ sustainability and green initiatives. They further added that they would, on average, expect to pay around $30 more a month in rent in order to facilitate such an initiative. “Are we to the point of awareness where residents are really considering some of these features standard? asked Lee.

“I think there’s a huge opportunity to engage residents more, especially given the demographic shift our nation is experiencing,” said Zatz. “Millennials, in general, are concerned with environmental issues and place value on programs and strategies to reduce environmental impact.”

EPA encourages multifamily owners and managers to talk more about the total cost of occupancy, which includes both rent and utilities, as opposed to just rent. Typically 10 to 15 percent of what a resident pays in rent is spent on utility costs, and those utility costs could be lower in buildings that are more efficient. “So, if we can talk about the costs as a package,” said Zatz, “people will think about it a little differently.”

“We’ve developed collateral to better illustrate how the savings adds up,” said Zatz. The idea is that residents will begin to ask about energy efficiency the way they ask about pet policies, parking, or other amenities. The EPA believes it can change the conversation between a leasing agent and prospective renter. Zatz expects these materials to be available to the public very soon.

“We’ve had a tremendous run this cycle, but many wonder if we’re at an inflection point,” said Lee. “Do you expect energy performance to become more important in a contracting market?”

“Sure,” said Zatz. “Cutting operating costs in a down cycle is never a bad thing. But we’ve seen steady interest and growth in energy performance benchmarking that really hasn’t been driven by the cycle. In good times or bad, there is money to be saved.”

What is really driving energy benchmarking participation, says Zatz, is investor and shareholder interest in energy performance as well as the strong desire to reduce greenhouse gas emissions. He believes that more investors, especially foreign investors, are expecting companies not only to disclose performance information, but for properties to meet certain international performance requirements. That’s something that’s been happening in the broader commercial real estate market for a while now, but multifamily is just catching up.