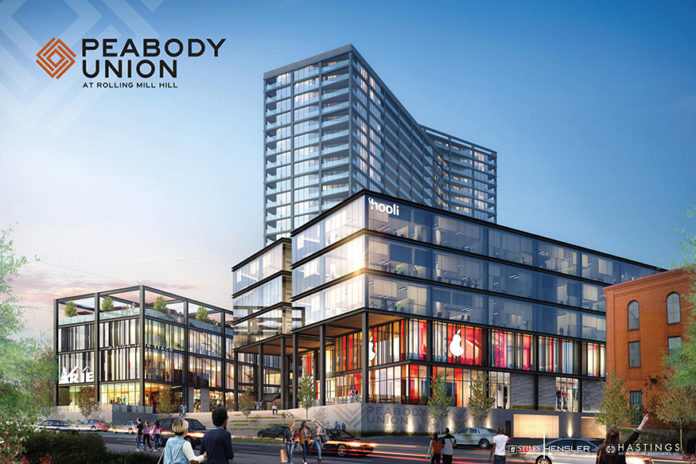 Peabody Union’s new retail space will feature a mix of flagship anchors, health and fitness concepts, local artisans and an eclectic array of signature restaurants. These tenants will offer an experiential mix of fashion, food, fitness and fun. Peabody Union will complement the other more tourist-oriented developments on Broadway with a mix of uses supported by convenient parking and easy access aimed primarily at local residents, greenway users, employees, entrepreneurs, athletes, cyclists, boaters and dog lovers. This next generation retail development will engage the local arts community and collaborate with the neighboring Entrepreneur Center to showcase local artistry, technology and innovation. In addition to retail, Peabody Union will feature new Class A office space and an exclusive 25-story residential tower with unparalleled and unobstructed views of downtown and the Cumberland River.

According to Hensler, the project’s mix of use and luxury concept will deliver a living experience unlike any other in the city. “Complemented by its neighbors, which include Ascend Amphitheater and the Trolley Barns, Peabody Union will establish a brand-new destination characterized by culture, art and entertainment, luxury living and the newest state-of-the-art and sustainable Class A office space,” said Hensler. “This project will become a riverfront greenway destination and the ultimate gathering place with a wide variety of experiences and activities for locals before and after downtown events. It will also become a must-see destination for many of the more than 15 million annual visitors expected in Nashville by 2023.”

The Stiles|Hensler joint venture has agreed to terms in a Development Agreement that provide for it to pay MDHA $16 million for Lot K and make an additional $1 million contribution towards affordable housing in Nashville. MDHA has also approved up to $17.5 million in tax increment financing to fund construction of approximately 400 MDHA-controlled garage spaces as well as traffic signalization, streetscapes, and extensive greenway improvements along the Cumberland River.