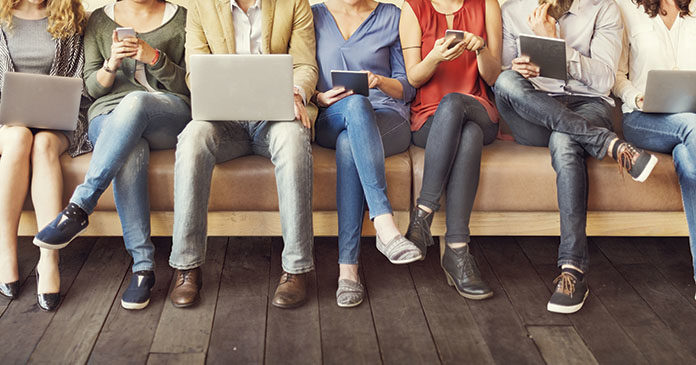 A new Pew Research Center survey of U.S. adults finds that the social media landscape in early 2018 is defined by a mix of long-standing trends and newly emerging narratives.

Facebook and YouTube dominate this landscape, as notable majorities of U.S. adults use each of these sites. At the same time, younger Americans (especially those ages 18 to 24) stand out for embracing a variety of platforms and using them frequently. Some 78 percent of 18- to 24-year-olds use Snapchat, and a sizeable majority of these users (71 percent) visit the platform multiple times per day. Similarly, 71 percent of Americans in this age group now use Instagram and close to half are Twitter users.

As has been the case since the Center began surveying about the use of different social media in 2012, Facebook remains the primary platform for most Americans. Roughly two-thirds of U.S. adults now report that they are Facebook users, and roughly three-quarters of those users access Facebook on a daily basis. With the exception of those 65 and older, a majority of Americans across a wide range of demographic groups now use Facebook.

But the social media story extends well beyond Facebook. The video-sharing site YouTube—which contains many social elements, even if it is not a traditional social media platform—is now used by nearly three-quarters of U.S. adults and 94 percent of 18- to 24-year-olds. And the typical American reports that they use three of the eight major platforms that the Center measured in this survey.

These findings also highlight the public’s sometimes conflicting attitudes toward social media. For example, the share of social media users who say these platforms would be hard to give up has increased by 12 percentage points compared with a survey conducted in early 2014. But by the same token, a majority of users (59 percent) say it would not be hard to stop using these sites. 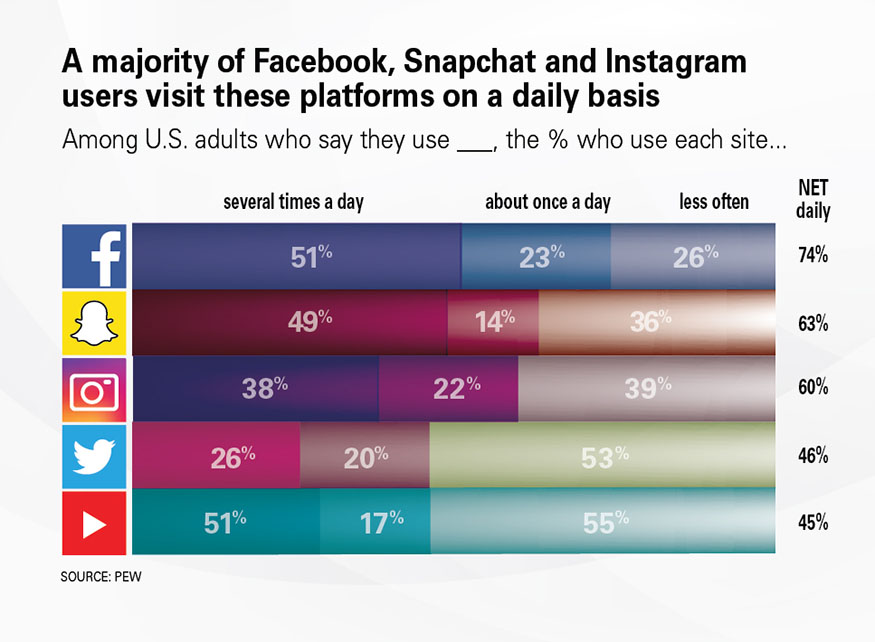 Facebook remains the most widely used social media platform by a relatively healthy margin: some 68 percent of U.S. adults are now Facebook users. Other than the video-sharing platform YouTube, none of the other sites or apps measured in this survey are used by more than 40 percent of Americans.

The Center has asked about Facebook, Twitter, Instagram, LinkedIn and Pinterest in past surveys. In general, the share of people using them has remained steady since the last survey in April, 2016. The most notable exception is Instagram: 35 percent of U.S. adults now say they use this platform, an increase of seven percentage points from 2016.

There are substantial differences in social media use by age. Some 88 percent of 18- to 29-year-olds indicate that they use any form of social media.

At the same time, there are pronounced differences in the use of various social media platforms within the young adult population as well. Americans ages 18 to 24 are substantially more likely to use platforms such as Snapchat, Instagram and Twitter even when compared with those in their mid- to late-20s. These differences are especially notable when it comes to Snapchat: 78 percent of 18- to 24-year-olds are Snapchat users, but that share falls to 54 percent among those ages 25 to 29.

With the exception of those 65 and older, Facebook is used by a majority of Americans across a wide range of demographic groups. But other platforms appeal more strongly to certain subsets of the population.

In addition to adopting Snapchat and Instagram at high rates, the youngest adults also stand out in the frequency with which they use these two platforms.

There is a substantial amount of overlap between users of different social media sites. Most notably, a significant majority of users of each of these social platforms also indicate that they use Facebook and YouTube. But this reciprocity extends to other sites as well. For instance, roughly three-quarters of both Twitter and Snapchat users also use Instagram.

This overlap is broadly indicative of the fact that many Americans use multiple social platforms. The typical American uses three of these sites. As might be expected, younger adults tend to use a greater variety of social media platforms. The median 18- to 29-year-old uses four of these platforms, but that figure drops to three among 30- to 49-year-olds, to two among 50- to 64-year-olds and to one among those 65 and older.

Even as a majority of Americans now use social platforms of various kinds, a relatively large share of these users feel that they could give up social media without much difficulty.

These findings vary by age. Roughly half of social media users ages 18 to 24 say it would be hard to give up social media, but just one-third of users ages 50 and older feel similarly. The data also fit broadly with other findings the Center has collected about Americans’ attitudes toward social media. Despite using them for a wide range of reasons, just 3 percent of social media users indicate that they have a lot of trust in the information they find on these sites.

Relatively few have confidence in these platforms to keep their personal information safe from bad actors.