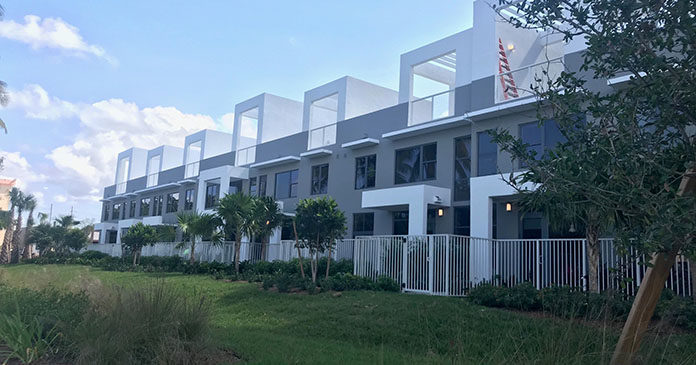 Leading developer EDEN Multifamily has completed construction of Lazul, an 8-story, 349-unit apartment building at 2145 Northeast 164th Street in the heart of North Miami Beach. EDEN has obtained a temporary certificate of occupancy (TCO) from the City of North Miami Beach and is facilitating resident move-ins and property tours.

Lazul is the most recent completed development for EDEN, the Miami-based joint venture formed by real estate industry veterans Jay Massirman and Jay Jacobson. EDEN and its partners have a substantial pipeline of planned multifamily projects, with over 2,300 units in Tamarac, Coral Springs, Orlando, Port Orange and a 374-unit, 32-story tower steps away from Las Olas Boulevard in Fort Lauderdale.

Pinnacle Living is handling leasing and management at Lazul. A furnished model residence has been unveiled, and the clubhouse and permanent leasing office are now open and operational.

Lazul represents a significant milestone for the City of North Miami Beach, which is experiencing a renaissance following the 2015 completion of the City’s Mixed Use Town Center zoning district.

“The completion of Lazul is a special moment for everyone at EDEN,” said EDEN President and CEO Jay Jacobson. “It is thrilling to play a key role in the evolution of the Mixed Use Town Center district. Our leasing momentum has been strong, which highlights the pent-up demand for high-end rental inventory in the city.”

Lazul includes studio, one-, two- and three-bedroom apartments, two-story townhomes, an eight-story parking garage and ground-floor commercial space. Building amenities include an inner courtyard with a heated pool, an elevated sundeck seating area with a firepit, community rooms, automated package delivery system, a state-of-the-art fitness center with a yoga/spin room and a dog walk and grooming area. Common area Wi-Fi and large community gathering spaces will be a dynamic feature of the community.

EDEN has also enhanced the public greenspace along the Snake Creek Canal with extensive landscaping, public seating, a walking path/bikeway and a significant public art installation which will become the focal point of this part of North Miami Beach.

MSA Architects is the project’s architect, with Bruce Howard and Associates providing landscape architecture and ID & Design International as the interior designer. Coastal Construction is the project’s general contractor.