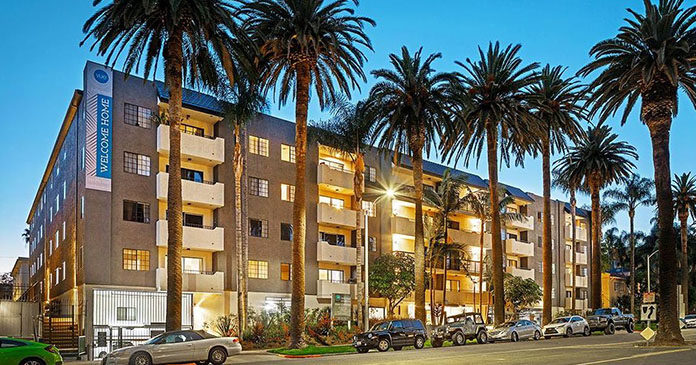 Institutional Property Advisors (IPA), a division of Marcus & Millichap, announced today the sale of Vue Hollywood, a 92-unit non-rent-controlled apartment building in Hollywood, California. The sales price is $45,018,000, which equates to $489,326 per unit.

“Hollywood has become the fastest-growing employment market in Southern California and the abundance of high-paying jobs created by entertainment, media, and technology companies is bolstering the strength of the rental market,” said Kevin Green, IPA senior director. “Vue Hollywood is particularly well suited to benefit from the area’s economic growth as there are thousands of new jobs within walking distance.”

“Previous ownership renovated 74 unit interiors to the highest-quality standard, leaving the opportunity for new ownership to capture significant revenue upside by upgrading the remaining units and capitalizing on the demand for high-end housing,” added Grabiec.

Vue Hollywood is located just off Sunset Boulevard, a few blocks from the eastern edge of West Hollywood and a short walk from Hollywood Boulevard. The Hollywood/Highland Metro Red Line is less than a mile away. Nearby employers include Netflix, Capitol Records, Technicolor and Ticketmaster, among many others. Built in 1987, the property has received significant exterior, common area, and apartment interior improvements since 2015. Most of the units are two-bedrooms and floorplans average 966 square feet.

With a network of senior-level investment advisors located throughout the United States, Institutional Property Advisors (IPA) is qualified to meet the needs of institutional and major private investors. IPA’s combination of real estate investment and capital markets expertise, industry-leading technology, superior support services and acclaimed research offer customized solutions for the acquisition and disposition of institutional properties and portfolios.