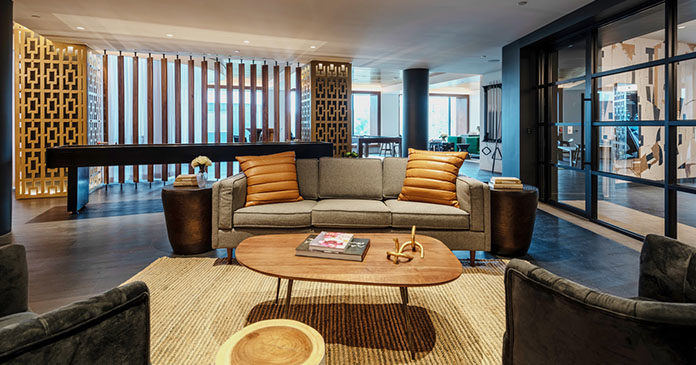 Arel Capital unveiled the new Bayou on the Bend after completing a multi-million dollar renovation and completely overhauling the luxury community following the devastating damage of Hurricane Harvey. The ten million dollar project included a total upgrade of 152 damaged units and a comprehensive revamp of the exterior, and a significant upgrade of both interior and community amenities.

Located at 5201 Memorial Drive in Houston overlooking Buffalo Bayou, the upscale, 242-unit, high-rise community, was purchased by Arel Capital in May of 2017. Three and a half months later, the property sustained significant damage in the aftermath of Hurricane Harvey.

“We decided to use Hurricane Harvey as an opportunity to expand our renovation plans already in the works and speed up the timeline a year ahead of schedule,” said Richard Leibovitch, Managing Partner of Arel Capital. “We decided to upgrade the apartment homes that were damaged in the storm and completely transform and elevate the exterior paint, interior hallways, leasing office, club house and other amenities. Bayou on the Bend has been brought to one of Houston’s premier luxury apartment communities, and we cannot thank our residents enough for their patience, their understanding and for sticking with us throughout this process.”

Bayou on the Bend features open-concept, one, two and three-bedroom floor plan options, ranging from approximately 700 to 2,475 square feet. The newly revamped recreational amenities include a rooftop pool and lower level infinity-edge pool, state-of-the-art fitness center, and social lounge with panoramic views of the City of Houston. Other new amenities include an executive business center, conference rooms, domed clubroom and indoor steam rooms.

Arel Capital was formed in early 2013 with its first transaction of a 70-townhouse complex in Houston for $8.8 million. Arel Capital has since closed 45 transactions, representing about $2 billion worth of real estate in eight cities (New York, Houston, Denver, Austin, Charlotte, Charleston, Nashville and Tampa). More than 150 limited partners in the US, Canada, Europe, South America and Asia, including high net worth individuals, family offices and institutional investors, have invested in various Arel Capital transactions. The firm is headquartered in New York City.