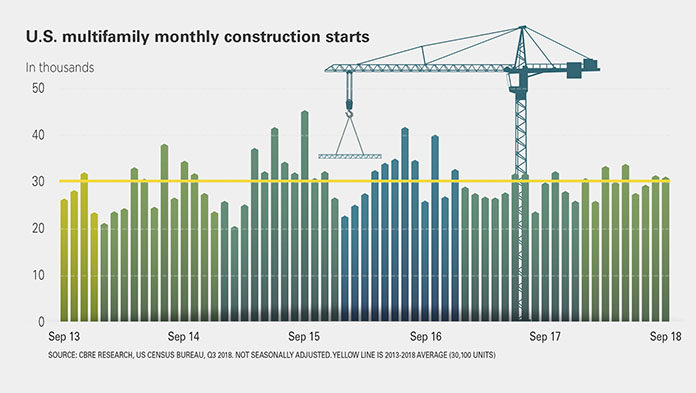 Global real estate consultant CBRE is reporting this week a 9.3 percent drop in permitting activity in U.S. for multifamily units last month is a favorable sign for future market balance due to slower construction activity.

Other newly released statistics for multifamily housing—starts and units under construction—indicate that current construction activity is still at high levels. However, given the reduced permitting, a slowdown in both starts and under-construction totals can be expected in 2019.

According to new CBRE Econometric Advisors data, U.S. multifamily demand remains healthy. For the year ending Q2 2018, total net absorption was at its highest level in more than 15 years. Despite high levels of construction activity, vacancy rates are only inching up slowly due to strong demand. The demand outlook is also favorable based on sustained economic growth, low levels of homebuying and multifamily renters staying in rental units for longer periods.

Three of the four Census regions registered year-over-year declines, with the sharpest drops in the Midwest and the Northeast. The South had a moderate increase, while the West had a small decline in permitting activity.

While there is always fluctuation in monthly data, the seasonally-adjusted rates for multifamily permitting have been declining since March 2018, which provides confidence that the September rate reflects a sustained decline in permitting activity. This is certainly good news for most of the multifamily industry, particularly owners and investors hoping for reduced deliveries that would lead to more market balance in the next few years.

The starts data indicates that multifamily construction activity will remain relatively high for some time yet; a multifamily project started in September 2018 would most likely be completed in 2020. The starts story also seems at odds with permits. Yet, given that permits precede starts, one can expect the decline in permits to translate into a decline in starts in the coming months.

Regionally, only the West had a higher under-construction total compared to the prior year.

The under-construction total, which represents deliveries over the following two years or so, will begin to edge down when the lower levels of units permitted translates into fewer starts. That trend likely will become apparent in 2019.