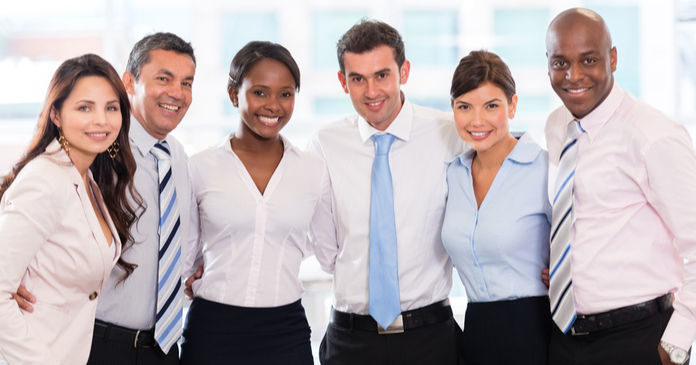 The Job Openings and Labor Turnover (JOLT) report for November was released by the Bureau of Labor Statistics (BLS) Tuesday. Its data on the parts of the job market of interest to the multifamily industry, real estate management and construction, show a continuation of the recent strength in the former sector but a softening in the latter sector.

For the entire jobs market, the BLS reported that there were 6.9 million private sector job openings at the end of November, down slightly from the October figure. Hires for the month exceeded separations by 200,000, so that total employment rose during November.

The private sector jobs opening rate in November, 4.7 percent, was again higher than the unemployment rate, 3.9 percent, indicating that there continued to be more jobs available than there were people to fill them.

Multifamily job growth is tracked in a part of the jobs market the BLS calls “real estate and rental and leasing” (RERL), which also includes similar businesses in other industries. The jobs data for this segment showed that, after a summer of job losses, employment in November increased for the third month in a row. Hiring remained in line with its recent levels but employment rose due to fewer people quitting their jobs. 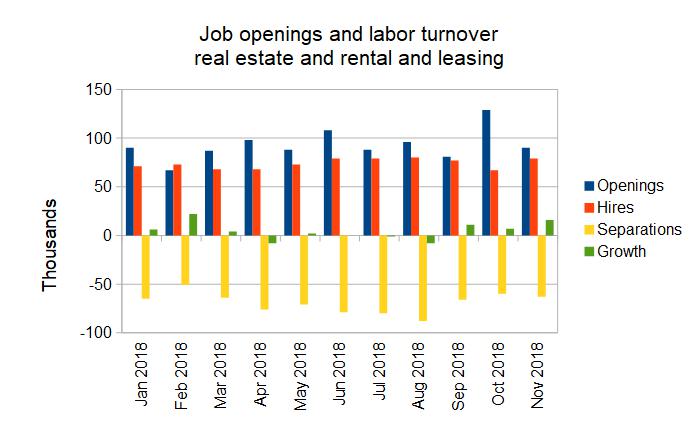 The next chart shows the turnover in the construction jobs market. The November report broke a pattern of job gains in construction that had been in place since April. While the number of hires was in line with recent levels, both layoffs and quits were up for the month, resulting in a net loss of 4000 jobs. This is a small number of job losses compared to the 379,000 hires which took place during the month and so it will be interesting to see how it changes when revised figures for November are released next month.

The chart below illustrates the recent trends in the construction jobs market. 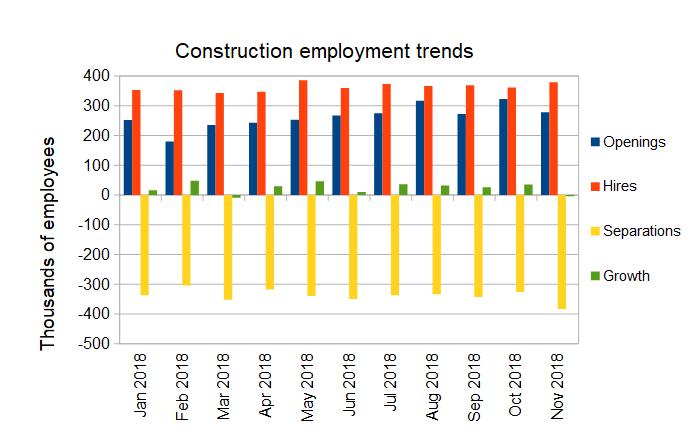 The final chart, below, shows long-term trends in the construction jobs market based on three month moving averages of hires, openings, layoffs and quits. While hiring has remained steady, openings are down after a nearly unbroken series of increases this year. Construction job openings are often low at the start of the year and the November decrease in openings may show the beginnings of this trend. The chart also shows that quits continue to exceed layoffs as a cause of the loss of workers, a much different pattern than earlier in the recovery from the recent recession where involuntary layoffs greatly exceeded voluntary quits as a cause of job separations. 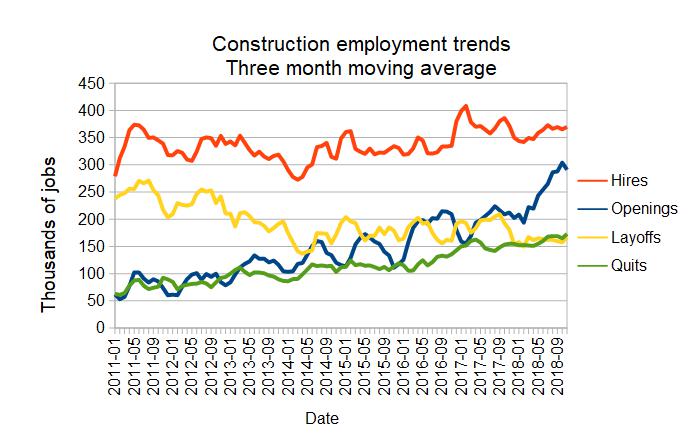