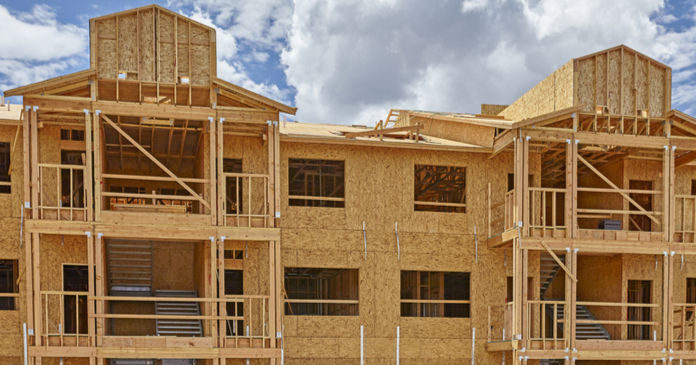 Nationally, permits for buildings with 5 or more units were up 6 percent from November at 460,000 units on a seasonally adjusted, annualized basis. Another 37,000 permits were issued for buildings with 2 to 4 units. This is the highest level of permit issuance since April and it is 13.6 percent higher than the same month the year before.

The regional data for multifamily housing is only reported for structures with two or more units. It is examined here based on three month moving averages.

For the country as-a-whole, permit issuance for multifamily housing In December was up 6.2 percent from November but was nearly unchanged from the year-earlier level. This is shown in the first chart, below. As the chart makes clear, permit issuance in the September-October time frame was down significantly from its recent levels, and this may be affecting the year-over-year comparison. However, the recent uptick in permits may indicate that the high level of multifamily housing construction we have seen for the past three years may continue for another year.

In looking at the four regions of the country, the Midwest region was the only one to not see a growth in the number of permits issued compared to the month earlier level. Growth in permit issuance was highest in the West with a rise of 15.6 percent compared to November.

On a year-over-year basis, the South was the only region to see a growth in the number of permits issued. However, its growth of 27 percent was so strong that it overcame the declines in the other three regions. 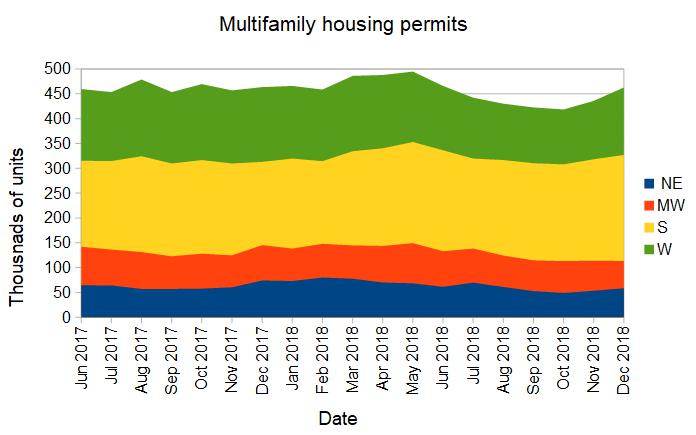 Construction starts for buildings with 5 or more units were down 22 percent from November to a level of 302,000 on a seasonally adjusted, annualized basis. That there was a decline reported is partly due to the fact that the 387,000 starts reported for November were much higher than recent monthly levels. Construction starts in December were actually in line with their levels in the August to October time frame.

Construction starts in December for buildings with 5 or more units were also reported to be down from their levels of a year earlier, falling 16 percent.

Multifamily housing construction starts (two or more units per structure) were down only 3.4 percent from their November levels for the country as a whole, based on three month moving averages. The South was the only region to see an increase, registering a gain of 24 percent. The Northeast was the weakest region with a decline in starts of 13.6 percent, although the West saw a bigger decline in the number of starts, with a fall of 16,000 units. 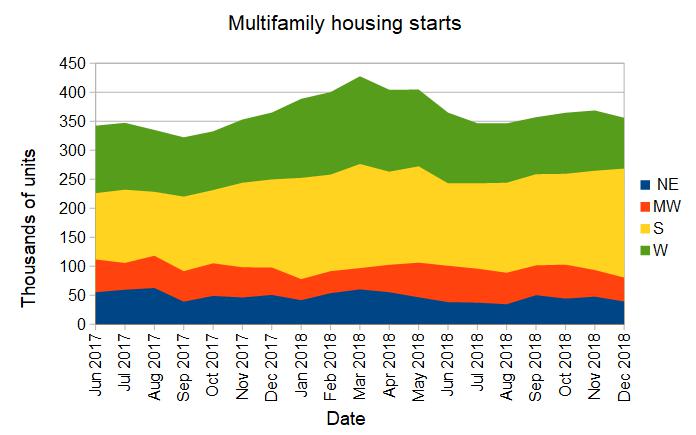 Nationally, completions of buildings with 5 or more units were down 9 percent from a relatively strong November to a level of 296,000 units on an annualized basis. On a year-over-year basis, completions were down by 15 percent. 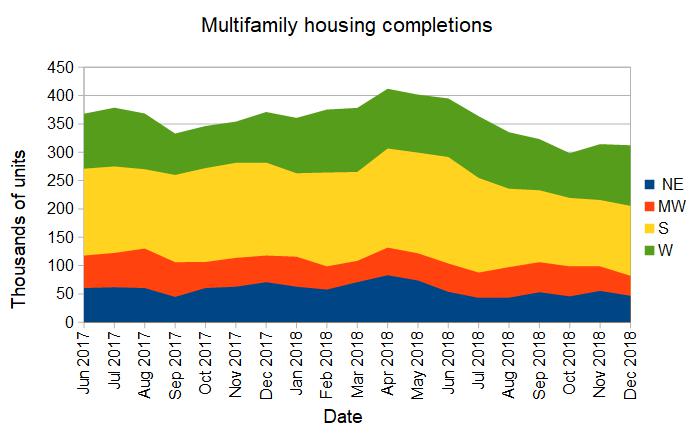