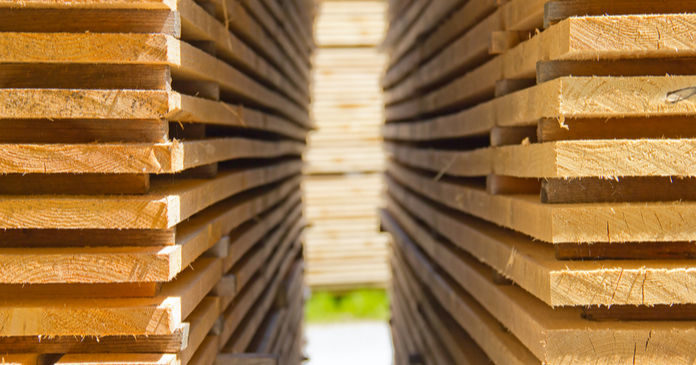 The Bureau of Labor Statistics (BLS) released its producer price index report for February, 2019. It showed that overall prices for processed goods for intermediate demand rose by 0.4 percent from January after declining for three straight months. Both the current rise and the recent declines were attributed to volatile energy prices. This compares with a 1.5 percent rise in the all-items consumer price index (CPI) for the 12 months ending in February.

The BLS price index of materials and components for construction was down 0.1 percent from January 2019, but was 2.0 percent higher than a year earlier on an unadjusted basis.

Multihousing Pro (PRO) compiled the BLS reported changes for our standard list of construction commodities. These are commodities whose prices directly impact the cost of constructing an apartment building. The two right hand columns of the table provide the percent change in the price of the commodity from a year earlier (12 Mo PC Change) and the percent change in price from January 2019 (1 Mo PC Change). If no price data is available for a given commodity, the change is listed as N/A.

The big story in construction material prices over the last two years has been the volatility in the price of lumber. Although prices are well down from their peaks reached last summer, they have show some strength, rising off of their recent lows. The price changes are illustrated in the first chart, below, which shows the prices of softwood lumber, OSB and soft plywood relative to their levels in January, 2017. Note that no price for OSB was reported for this month. 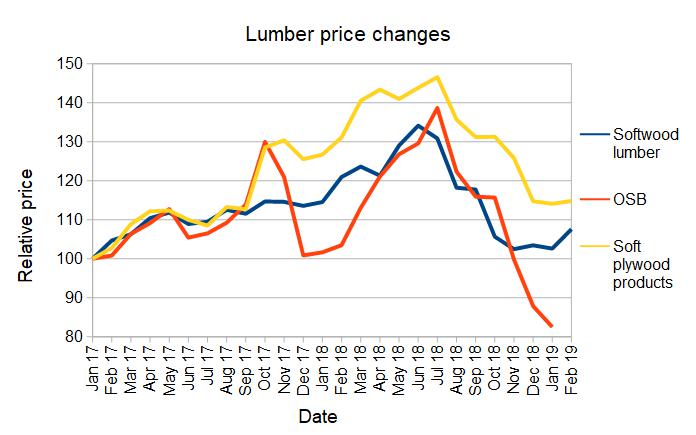 The decline in the prices of wood products since last summer have been offset by rises in other construction material prices. This is shown in the chart below, which plots the relative changes since July, 2017 for a selected group of construction material prices. After surging last year, the prices of most of these commodities seem to have plateaued while the price of gypsum products have fallen. 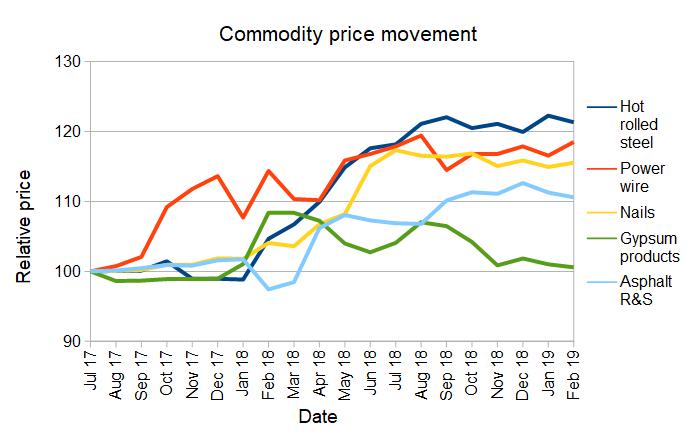