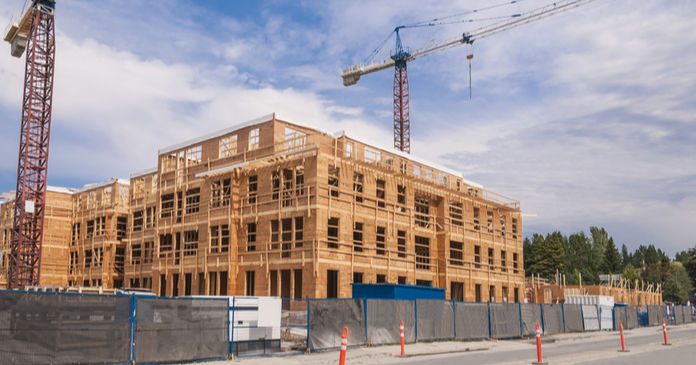 Nationally, the three-month moving average for multifamily housing construction permits issued in May was up 0.3 percent from the April level and was down 2 percent from the level of May 2018. This is shown in the first chart, below.

Compared to year-earlier levels, the South was the only region to see an increase in permits issued, with a rise of 4.6 percent. The other three regions saw a decline in permits issued but none by more than 10 percent. 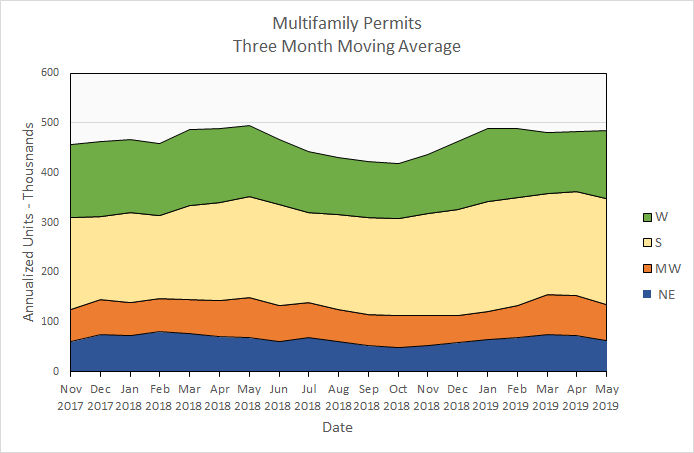 The May report on construction starts for buildings with 5 or more units showed an increase of 13.8 percent from the April level. April starts were at 436,000 units on a seasonally adjusted, annualized basis, the highest level since October 2017. In addition, both the March and April figures were adjusted upward, March by 10,000 units and April by 24,000, so this was a very strong report for starts.

Compared to year-earlier levels, construction starts for buildings with 5 or more units were also up by 13.8 percent.

On a year-over-year basis, starts were almost flat, rising by 0.5 percent for the country-as-a-whole. However, the year-ago period was one of exceptional strength, so matching it in starts is a positive sign.

By region, compared to year-earlier levels, starts were up 18 percent in the South but were down in the other regions of the country. The Midwest saw the largest rate of decline with starts falling 27 percent.

The following chart shows multifamily housing starts by region for the last 18 months. 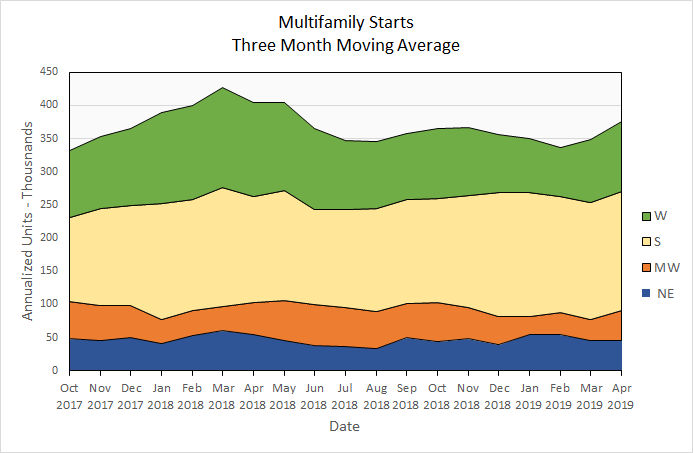 For the country-as-a-whole, multifamily housing completions (two or more units per building) were down 13.3 percent month-over-month when comparing three-month moving averages. The Midwest was the only region to see an increase in completions with a rise of 6.3 percent. All other regions saw completions fall, with the decline in the South approaching 20 percent.

On a year-over-year basis, the three-month moving average of completions was down by 7 percent. The Midwest region saw completions rise by 28 percent while the West saw a rise of 2 percent. Completions fell by 27 percent in the Northeast and 14 percent in the South, more than offsetting the gains in the other regions. Nationally, the three-month moving average for multifamily housing completions came in at 371,000 units on an annualized basis. While this level is down from recent highs, it is still in line with long term averages. 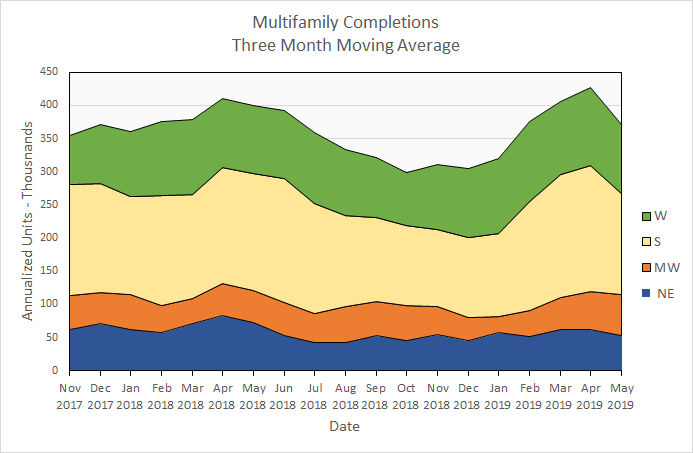