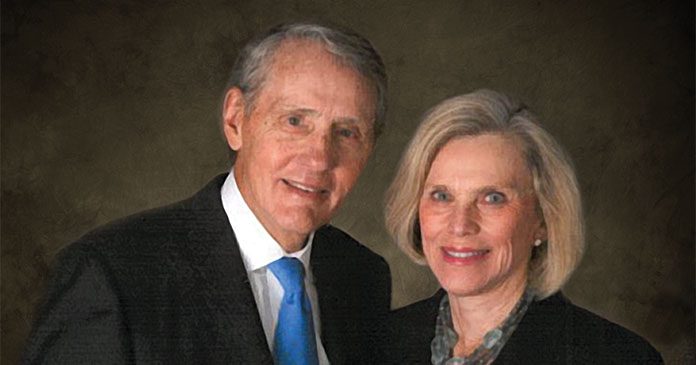 Fath, who owns apartment complexes in Greater Cincinnati as well as a minority interest in the Cincinnati Reds, said he was struck by the plight of Africans who can’t afford safe and timely medical operations.

“I’ve always had tremendous sympathy for less-fortunate people,” Fath said. “My biggest pain is the unfairness in life and the tragic situation so many human beings find themselves in. Mercy Ships is actually doing something about it.”

The $50 million from Fath and his wife, Linda, is the largest amount ever pledged to Mercy Ships, said Don Stephens, president and founder of the Texas-based nonprofit established in 1978.

“This will bring sustainable health care to much of Africa, changing the lives of some of the poorest people in the world,” Stephens said.

Mercy Ships is a Christian ministry that now operates a vessel called Africa Mercy, which was built in 1980 as a rail ferry. It was refitted and deployed as a hospital ship in 2007. The new ship that the Faths are helping fund will be completed in 2020 and is designed to serve for 50 years, Stephens said.

More than 1,550 life-changing surgeries were performed in 2016 upon Mercy’s current hospital ship, including the removal of cataracts to restore sight and operations to correct cleft palates. In addition, nearly 22,500 dental procedures were performed for 9,350 patients in 2016.

Mercy Ships expects to double the number of people who will be helped once the new ship is launched. It will include six operating rooms, an intensive care unit and 199 hospital beds as well as radiology and pharmacy services.

Fath’s pledge to Mercy Ships came shortly after pledging $50 million to the Lindner Center of Hope, a UC Health hospital in Mason, Ohio, that specializes in the treatment of mental illness and addiction.

“I want to dictate where my money goes and not leave it to some board after I’m gone,” said Fath, 76, a lawyer. “My goal is to do a few significant things versus a hundred small things.”

Fath Properties is one of the largest privately-held firms in Greater Cincinnati. The company owns 30 properties with 8,500 units, including communities in Ohio, Kentucky, Indiana and Texas.

Fath visited Mercy’s current hospital ship off the coast of Benin in 2017. He was accompanied by his eldest daughter, Heather.

“Each day we witnessed operations,” Fath said. “We talked to nurses, doctors and basically just hung around to get a feel.

“A little girl whose cleft-palate surgery we witnessed, we wanted to see her in recovery the next day,” Fath recalled. “It was so beautiful. This 4-year old girl had this clear bandage over her lip, and it was perfect after the operation.”

In the back of the recovery room was an African man who had undergone a procedure to remove a tumor.

It caught the eye of the patient, who pointed to it.

During a November 2017 dinner in Dallas that celebrated key donors to Mercy Ships, Fath handed Stephens an envelope. Inside was a document that Fath’s lawyers had prepared, which outlined details of a binding gift of $50 million.

The contracted construction cost of the 37,000-ton ship is $126 million, and change orders are expected to be less than $2 million. That doesn’t include medical equipment, computers and other items, which could include in-kind donations and would add about $50 million to the cost.

So, total cost could be about $178 million to build and outfit the 630-foot-long ship, which will be able to accommodate more than 500 volunteers at a time.

Fath said his donation will be made over a period of years. If the full amount isn’t contributed in his lifetime, the irrevocable legal agreement will ensure that Mercy Ships gets the remainder as a bequest.

Before deciding to donate $50 million, Fath reviewed the financials of Mercy Ships in Garden Valley, Texas, and visited the hospital ship.

During Fath’s visit to the current floating hospital, he was impressed by the good works of the doctors, nurses and others who volunteer. They pay their own airfare to Africa as well as room and board for the privilege of helping the less fortunate. In some cases, a local church or club might raise money to help cover the costs.

“I’ve tried all my life to have a missionary mentality,” Fath added. “I’ve accomplished a few things, but what Mercy Ships is doing is incredible. It’s such a privilege to be able to help.”