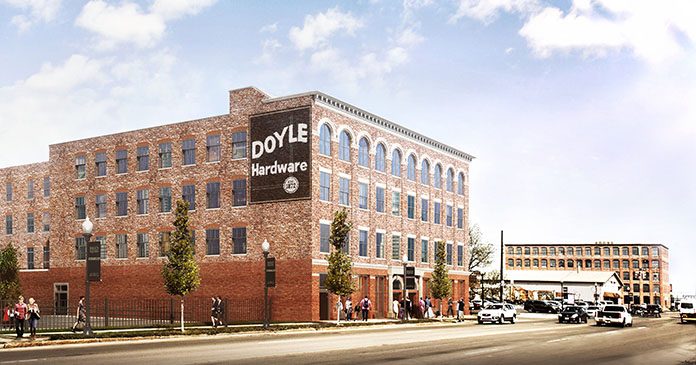 “Today marks yet another step forward in the ongoing transformation of Downtown Utica into a true neighborhood. The addition of these 56 loft apartments and the ground-floor commercial space will add a vitality to the Bagg’s Square neighborhood that had previously been lacking. In addition, this project has been a catalyst for other projects in the immediate vicinity that are either already underway or in the planning stages – all contributing to making Utica the best little city. Thank you to State Comptroller Thomas P. DiNapoli, the Community Preservation Corporation, Empire State Development and all of the various project partners for your investment in this project and in the City of Utica,” said Robert Palmieri, Mayor of Utica.

“We are pleased to partner with the Community Preservation Corporation to invest in housing at the former Doyle Hardware Building,” said New York State Comptroller Thomas P. DiNapoli. “As trustee of the state pension fund, I welcome this opportunity for a sound investment for our retirement fund that has also helped rehabilitate this building.”

“Projects like The Doyle, that put our historic buildings back into use as resources of housing and economic opportunity are critical to the future of cities like Utica,” said Thomas McGrath, Senior Vice President, Director of Upstate Revitalization at the Community Preservation Corporation. “My thanks to Comptroller DiNapoli and our partners at the State’s Common Retirement Fund, Mayor Palmieri, Empire State Development, JPMorgan Chase and National Grid.”

As a nonprofit housing finance company with a long history of serving communities throughout New York State, CPC understands the importance of investing in projects that help breathe new life into neighborhoods and which connect them with their historic past. Former industrial buildings like mills, factories, and warehouses, which were once hubs of activity throughout New York can be put back into use as new housing and retail space – again serving as anchors of activity and economic opportunity for neighborhoods large and small.

CPC, along with lending partner Five Star Bank, provided a $12 million construction loan. CPC also provided a SONYMA-insured $9.3 million permanent loan financed through their partnership with the New York State Common Retirement Fund. The project was also awarded a $1 million Capital Grant through Round 6 of Governor Cuomo’s Regional Economic Council, and a $250,000 grant from National Grid Main Street Revitalization. Chase is providing $3.9 million in tax credit equity. The property will utilize federal and State historic rehabilitation tax credits, and will benefit from a PILOT agreement with the City of Utica Industrial Development Agency.

Situated on slightly more than one acre, the building was designed by well-known Utica architect Frederick H. Gouge and constructed in three sections between 1881 and 1901.  Originally built as a clothing factory, in 1934 it became a factory for the manufacture of spark plugs, in 1947 became home to Utica Distributing Company, and later Doyle Hardware. The building was added to the National Register of Historic Places in 1993.

In 2007 the building was purchased by a developer who planned to convert it into a restaurant, commercial office space and loft apartments. A restaurant and bar opened in 2010 but later closed in 2012 with no other development of the building having occurred. The building went into foreclosure and the developer declared bankruptcy in 2013. It was listed for sale in 2015, and purchased by the Doyle Hardware Building LLC team in 2016 who had a vision to redevelop and revitalize the property.

The apartments at The Doyle have been fitted with hard-wood kitchen cabinetry, granite or similar hard surface countertops, contemporary stainless steel appliances, ceramic tile bathrooms, polished concrete floors, and original hardwood flooring. Each apartment has its own heating and central air conditioning package and in-unit washers and dryers. Amenities include a central elevator, onsite amenities include parking for residential and commercial tenants, tenant storage as well as a fitness center and theatre room.

About the Community Preservation Corporation (CPC)

Established in 1974, CPC is a nonprofit affordable housing and community revitalization finance company that believes housing is central to transforming underserved neighborhoods into thriving and vibrant communities. The company provides a full suite of capital products through its construction lending, permanent lending, and equity investing platforms. Since inception, CPC has leveraged approximately $10.5 billion in private and public investment to finance more than 193,000 units of multifamily housing. CPC’s work with its partners has helped revitalize countless neighborhoods and provided quality housing for families, senior citizens, and individuals with disabilities.