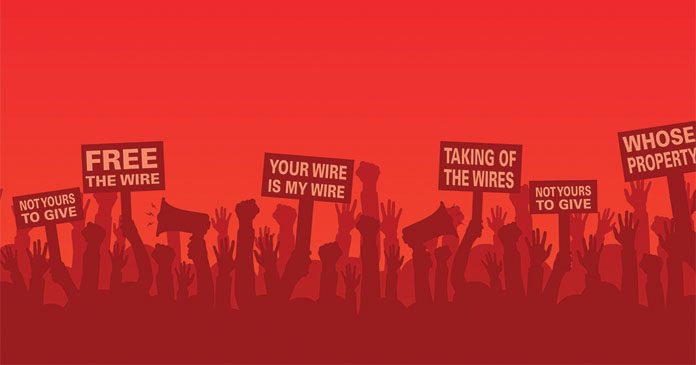 The provision of the San Francisco law, known as Article 52, says property owners can’t deny internet service providers access to wiring that’s already in multiunit residential and commercial buildings. When the law was passed in December 2016, it was thought to be the first city ordinance of its kind in the nation, according to then-supervisor Mark Farrell.

“To provide service, broadband providers must have access to potential customers in the building,” Pai said. “But when they know that they will have to share the communications facilities that they install with their competitors, they’re less likely to make the effort in the first place.”

He added that an in-use wire sharing requirement wasn’t consistent with federal policy of promoting “facilities-based competition as a means of encouraging broadband deployment and investment.”

“We should support efforts to allow Americans more broadband choices,” Rosenworcel said. “But today, the Federal Communications Commission says ‘not so fast.’ We stop efforts in California designed to encourage competition in apartment buildings. Specifically, we say to the city of San Francisco, where more than half of the population rents housing in often multi-tenant units, we say you cannot encourage broadband competition. This is crazy. There’s so much wrong with this decision.”

The measure was approved by Pai and commissioners Michael O’Reilly and Brendan Carr. Commissioner Geoffrey Starks joined Rosenworcel in dissenting on the preemption of the San Francisco law, though he concurred on a broader FCC bid to reexamine broadband access in apartment buildings.

Pai sharply criticized the city’s approach to the issue in the hearing.

Some lawmakers pushed back on the proposal before the vote. Rep. Katie Porter, D-Irvine, introduced a budget amendment that would prevent the commission from finalizing a draft rule that would overrule local laws that encourage broadband competition. The House of Representatives passed a group of amendments including Porter’s.

House Speaker Nancy Pelosi, D-San Francisco, sent a letter to the commission urging them to delay and reconsider the vote on the measure concerning San Francisco’s Article 52.

“This proposal is deeply misguided, and would undermine freedom of choice, increase costs and reduce service quality for residents, as it puts a chilling effect on much-needed competition in the telecommunications sector,” Pelosi wrote.