The inscription (above) is reminiscent of another that, according to Newsweek, was unearthed in the Sumerian city of Ur (located in modern-day Iraq and founded in 3800 B.C.), which says, “If the unheard-of actions of today’s youth are allowed to continue, then we are doomed.”

Whether these tablets actually exist is unclear. (Snopes, where are you when we need you?) What matters is that variations of these quotes have been circulating for at least a century, and there’s a reason for that.

Few will disagree that there is a tendency for generations to caricaturize one another. The young tend to see the old as fuddy-duds and scolds, while the old tend to view the young as disrespectful, lazy, and rebellious.

Nowhere is this more evident than in the current OK Boomer movement. If you’re not familiar, OK Boomer is an internet meme and catchphrase that went viral in 2019. It’s used by Gen Z and millennials to mock baby boomers grousing about their work ethic and attitudes.

To be fair, young people have something to grump about. (I say this as a Gen Xer who has no skin in the game.) They’ve been accused of being emotionally fragile, sexless, lazy, ingrates who are going to die faster than everyone else (so there!)

The extent to which any of these characterizations are true is open to debate, as is the extent to which baby boomers and Gen Xers actually believe these things. (One could argue that much of the discontent is driven by weak social science and media who fan outrage to gin up clicks.)

What matters is that young people are getting a little tired of the caricatures, evidenced by the commercial success of OK Boomer merchandise. In turn, baby boomers appear to be irritated by the young upstarts who are clapping back.

“OK, millennials,” Myrna Blyth, senior vice president and editorial director at AARP, told Axios. “But we’re the people that actually have the money.”

The internet exploded over Blyth’s comment, of course, and the AARP quickly disavowed her words. While the (over)reaction to Blyth’s comment is much ado about nothing, it foreshadows a greater conflict ahead.

OK Boomer is part of a larger showdown

The baby boomers might “have the money,” as Blyth put it, but they’re also leaning on millennials and Gen Z to collect more of their paychecks.

About 44 million Americans received Social Security benefits in 2018, and about 34 million of those were baby boomers, who continue to retire at a clip of roughly 10,000 per day. That’s a lot of retirees to support.

Before you begrudge boomers too much, consider a few things. First, boomers contributed lots of money to Social Security over the years themselves. Second, most of them are banking on that Social Security income, one of the proverbial “three legs” of the retirement stool, along with pensions/ employer-sponsored accounts and personal savings. Third, boomers haven’t done a great job building out the other two legs—45 percent say they have zero retirement savings!—so many of them really need those Social Security checks, even if they have less debt and more equity than any other generation.

Nevertheless, Gen Z and millennials have some legit gripes. Baby boomers might have paid into Social Security, but millennials and Gen Z are being asked to pay a lot more—for a program that will likely offer them less return.

Social Security will begin drawing down its assets to pay retirees their promised benefits. Without program changes, the trust will be depleted within 15 years.

Workers today, on the other hand, are paying 6.2 percent on income up to $132,900. That’s a far greater contribution (if you can call it that) by a long shot. The problem is it’s nowhere near enough.

Next year, The New York Times reports, for the first time in nearly 40 years, Social Security will begin drawing down its assets to pay retirees their promised benefits. Without program changes, the trust will be depleted within 15 years.

“Then, something that has been unimaginable for decades would be required under current law,” says the Times. “Benefit checks for retirees would be cut by about 20 percent across the board.”

Does anyone think retirees will sit back and take a 20 percent shave on their retirement?

Me neither. So what happens? It’s hard to say, but we should first recognize that this is no easy fix. 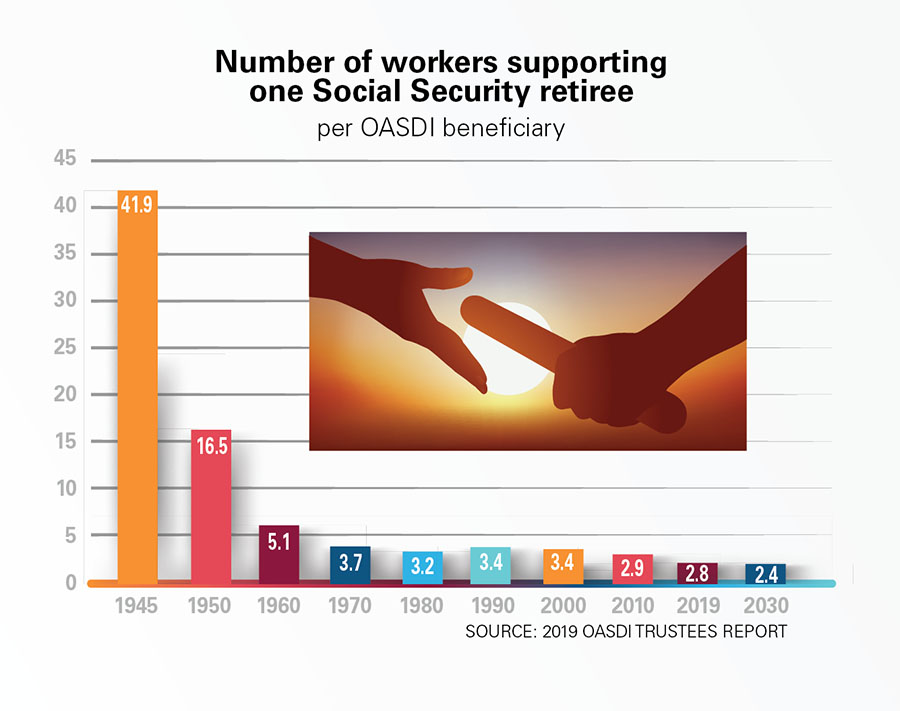 Today, 2.8 workers cover each retiree’s benefits, according to the Social Security Administration. By 2030 there will be just 2.4 workers supporting each retiree. (In Europe, the worker-retiree ratio is even lower.) However you slice the data, it’s clear that to sustain its growing population Social Security will require much bigger, ahem, contributions.

Okay, call them taxes, FICA. Whatever. The point is, the coming generations will be asked to pony up a lot more. How much? Well, the trustees of the Social Security program project the cash-flow deficit over the next 80 years to reach a staggering $44.2 trillion, says economist Veronique de Rugy.

That’s trillion, with a t. To put that figure into perspective, total federal revenues in 2019 amounted to $3.46 trillion.

There are pathways to making Social Security solvent, of course. Most of them involve young people paying more in taxes and retiring later. To fund Social Security for a generation 12 times wealthier than they are.

The irony of it all is almost too much. The “lazy” Millennials and “self-absorbed” Gen Zers will soon be asked to cough up trillions to cover the retirements of the boomers who mercilessly mock them, all to fund a program most millennials worry will not even exist by the time they reach retirement.

One cannot help but wonder if, when called upon to pay these obligations, millennials and Gen Z will just cock their heads and reply, OK Boomer.