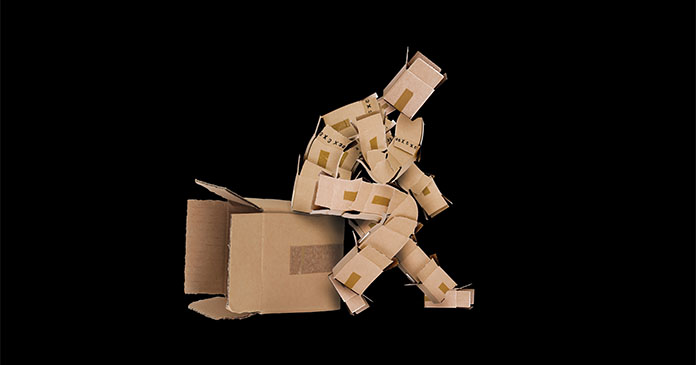 The never-ending flood of deliveries is creating a lot of new headaches for multifamily building managers. The most obvious is accepting these now essential deliveries in a safe and organized manner.

But another problem, one that is much more of a back office issue, is the mountain of waste that it creates. That mountain is made of cardboard and take-out containers. When you add that to all the trash being generated by a building full of residents stuck at home for a year, now you’ve got a problem the size of a landfill.

The pandemic has taken a bad problem and made it worse. Before we went into lockdown, per capita Americans were generating three times the global average of waste, producing roughly 1,700 pounds of trash annually.

Making matters worse, the U.S. is the only nation where waste generation outpaces its ability to recycle. America only recycles 35 percent of solid waste. Put simply, America generates the most trash and recycles the least.

Already piling waste to the sky at landfills across the country, the Solid Waste Association of North America estimates a 38 percent increase in residential waste since the pandemic began. Multifamily dumpsters, trash chutes, and garbage cans are bearing the brunt of the derelict deluge.

“Waste management in multifamily is way up, we’re seeing more additional services and more pickups during the pandemic. There’s been a huge surge in package lockers, that’s a great level of convenience. Problem is, what happens to the box?” RealPage Vice President of Sustainability Mary Nitschke said. “You’ve got this situation where that box is dropped in a dumpster. Now, 73 percent of the material in a dumpster is uncollapsed cardboard, to give a sense of the magnitude of this problem.”

Uncollapsed cardboard creates what those in the waste management business call artificial fullness. The dumpster looks full, but it isn’t. Haulers will pick up and charge you full price all the same. Preventing unnecessary pickups, overage charges, and fines can save a multifamily community thousands per month because multifamily trash removal works differently than single family.

If you’re a homeowner, you know when trash day is. It isn’t as simple as a weekly visit from the trash truck for multifamily buildings, they have both scheduled and by-need pickups with one hauler for trash and another for recycling. The complex nature of multifamily waste management means improper disposal can end up costing thousands in overages, fines and fees.

In-dumpster cameras backed by AI-powered technology are giving literal visibility to the problem. It’s simple, a camera in a dumpster that takes pictures eight times a day. AI can then identify 11 different types of material in that dumpster. If it finds a problem, it automatically generates a work order sent to on-site maintenance with a picture and a short description of the problem. Cameras create a technology capable of recognizing garbage bags, tanglers, ewaste, propane tanks, styrofoam, bulk items, woods, concrete, soil, metal, people and yes; uncollapsed cardboard. With motion sensors, you’re also likely to get a few pictures of raccoons.

Incorrect recycling has contamination fines soaring exponentially. “In the world of multifamily, you can see contamination fines up to $2,000 a month, that racks up really quickly,” Nitschke said. “You have no idea it’s happening till you get the bill, you’re completely reactive at that point.”

Typically the hauler assesses contamination fines when they find a non-recyclable item in the recycling, taking a picture as proof of the charge. Instead of getting a picture from the hauler you can’t do anything about, in-dumpster cameras provide the picture first, giving on-site staff a chance to do something about it before the hauler makes their pickup.

“It’s a mechanism for waste reduction and recycling,” Nitschke said. By reducing fines, reducing uncollapsed cardboard and cutting out additional pickups, in-dumpster cameras can net a multifamily community between a 10-37 percent reduction in waste cost. All told, the technology can save more than $1,800 per dumpster every year. That’s only half of it. Reducing waste and recycling better are critical to sustainability.

Once it’s picked up, the trash is going to a landfill or being burned off. Even most of the recycling doesn’t get repurposed. No longer content to be the world’s dumping ground, China, Thailand, Vietnam, and Malaysia have all recently banned waste imports, throwing a massive wrench in the global recycling industry.

With fewer options for disposal, more waste is being diverted to landfills and facilities that incinerate trash to generate energy. Neither is the best option. Waste incinerators generate fewer greenhouse gases than fossil fuels but less than natural gas, according to the EPA. There isn’t much the multifamily industry can do to solve global waste supply chain issues, but each complex can do its part to solve local supply chain issues.

Waste and diversion reporting is becoming an issue in several cities and states as regulations change. Known as diversion reporting, city ordinances require multifamily complexes to report waste numbers. More often than not, the reported numbers are what Nitschke calls cheap math. With no idea what’s in a dumpster or how full it is, the math is based on assumptions leading to inaccurate numbers. They don’t account for things like missed service events, which happened roughly 10-20 percent of the time.

Even haulers themselves can’t give detailed waste reporting. They can provide weight, that’s about it. There’s no way to report what was picked up. With cameras capable of identifying types of waste and dumpster capacity, software can be used to precisely calculate waste diversion based on what’s actually happening, not assumptions. Think of it like a utility meter for your dumpster.

The cameras can’t catch anyone in the act, that would create privacy issues. But it does give property staff a chance to fix the problem. No one is asking staff to jump into the dumpster, but if a cardboard box can be plucked out and collapsed, a massive problem can be solved. Behavioral modification of tenants has been difficult.

Most complexes have a simple set of rules or instructions for trash disposal but residents don’t like to handle doors or lids in garbage areas, often leaving it next to where it should be.

That’s a particular problem with trash compactors, which are becoming more common. Some communities will even fine residents for non-compliance. But, enforcement creates undue tension between management and residents.

Other complexes have given up hope on compliance entirely, choosing to hire a valet trash service. That too creates problems, hallways will be full of trash and often working with valet trash services isn’t any easier. Residents aren’t keen on valet trash either, especially when the cost is passed on to them.

Trash is hard, that’s why the problem persists. No one solution can tackle the magnitude of the crisis. This may seem like a back-of-house problem but that couldn’t be further from the truth.

How a complex is collecting garbage has one of the largest impacts on residents, giving operators a real opportunity to differentiate themselves from the competition.

Figuring out how to be more efficient with our trash is a win for all involved. Renters have an easier process, on-site staff has fewer headaches, marketing can advertise sustainable practices, owners can cut waste management costs, and haulers have fewer issues and everyone helps the environment. It’s time for the multifamily industry to give trash the same level of thought it has given deliveries. Our planet depends on it.