In my recent article on the Biden administration’s many-pronged assault on economic freedom, I pointed out that comparisons of President Biden with former president Jimmy Carter are inaccurate and unfair to Carter. In 1980, Carter, along with Democratic majorities in both the House of Representatives and the Senate, deregulated surface freight transportation. Deregulation of trucking, with the 1980 Motor Carrier Act, and of railroads, with the 1980 Staggers Rail Act, unleashed competition among truckers and railroads and between the two modes of transportation. Virtually everything that transportation economists anticipated and hoped for came about.

But on July 9, 2021, in Executive Order 14036, President Biden proposed that railroads be reregulated. Specifically, he proposed that the chair of the federal government’s Surface Transportation Board (STB) “consider commencing or continuing” regulations on “reciprocal switching agreements” and consider other regulations on freight transportation. The parts of the executive order on rail and, indeed, the whole executive order, show a serious misunderstanding of competition on the part of the Biden administration.

If the federal government were to move ahead with rail regulation, it would reverse one of the few major accomplishments of the Carter administration. It would create problems where few existed. 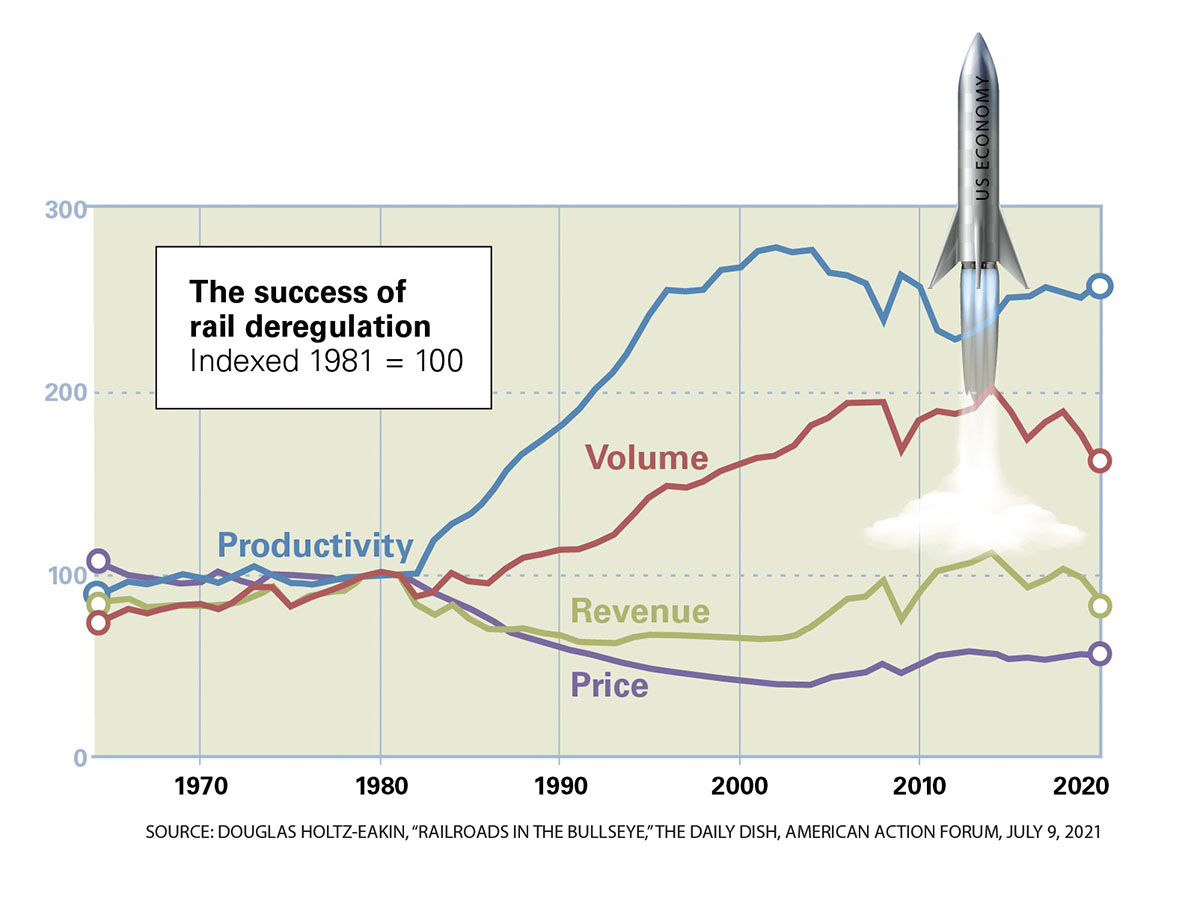 The federal government heavily regulated U.S. railroads for most of the twentieth century. In 1906, the U.S. Congress passed, and President Theodore Roosevelt signed, the Hepburn Act, which gave the Interstate Commerce Commission (ICC) the power to set maximum railroad rates. During World War I, President Wilson took the further step of nationalizing U.S. railroads. Although they were returned to their owners after World War I, until 1980, the federal government had a great deal of power over railroads.

This power hampered the railroads and, as trucking became widespread in the 1920s and 1930s, railroads found it difficult to compete.

Rather than deregulating to make it easier for railroads to compete, the feds instead decided to hamper competition by truckers.

But if the public did want to ship goods using new truckers, then restrictions on new truckers would have been harmful. The term “public convenience” was a smokescreen to cover up the fact that the purpose of the law was to inconvenience the public by reducing competition.

Nevertheless, even with competition from truckers hampered, trucking continued to grow, albeit more slowly, and railroads continued to decline. By the 1970s, railroads were in serious shape. If they were to be saved, Congress needed to do something.

By the 1970s, a consensus in favor of deregulation of transportation had developed among transportation economists and even among economists more generally. The reason was that the evidence was becoming increasingly clear that regulation of routes and prices, whether in the airline industry or in surface freight transportation, was leading to high airline fares and high freight rates.

The late 1970s was probably the twentieth century’s high point for economists’ free market influence on economic policy. Strategically-located economists took advantage of their opportunity. In their 2015 study titled Reviving Capitalism, policy analysts Fred L. Smith Jr. and Marc Scribner describe what happened when John W. Snow, a lawyer and a PhD economist who had been head of the National Highway Traffic Safety Administration, took action:

John Snow, by then an active member of the Association of American Railroads’ deregulation study group, bluntly stated in 1978 that he would press for “substantial deregulation of railroads in five years” and that the private railroads “simply can’t live with the kind of regulation the ICC is dishing out.”

Snow and his allies succeeded. In 1979, the Association of American Railroads developed a fourteen-point plan for deregulation. In 1980, Congress passed, and President Carter signed, the Staggers Rail Act of 1980. This act freed railroads from detailed regulation of freight rates.

Just months earlier, Congress had passed, and Carter had signed, the Motor Carrier Act of 1980. This act substantially deregulated trucking, allowing new trucke­rs to enter the industry without having to get permission and allowing truckers to compete on freight rates. Darius Gaskins Jr., an economist who was chairman of the ICC at the time of the Motor Carrier Act of 1980, used his discretion to deregulate entry and rates as much as the law allowed.

What were the results? Deregulation worked. In trucking, between 1979, just before deregulation was implemented, and 1986, once deregulation had a chance, revenue per truckload-ton fell by an inflation-adjusted 22 percent. Moreover, according to Hoover Institution economist Thomas Gale Moore, “Shippers reported that carriers were much more willing to negotiate rates and services than they had been prior to deregulation.”

Deregulation of rail freight transportation, moreover, led to a dramatic renaissance of the previously sick railroad sector. Railroads were freed to negotiate rates with shippers and they used this freedom to cut rates and compete with trucking. The Staggers Act also allowed railroads to drop unprofitable rail lines without having to go through a cumbersome process to justify their decisions to the ICC.

Of course, the usual way to compete on prices is not to raise them but to cut them. And this the railroads did while, with their new flexibility, increasing productivity. In their October 2021 study for the American Consumer Institute, Veering Off the Rails: How the Recent Push to Reregulate Railroads Threatens Consumer Welfare, Steve Pociask and Liam Sigaud write:

From 1980 to 2020, taking account of inflation, the industry’s productivity has increased 159 percent, shipping volumes have increased 57 percent, revenues have dropped 13 percent, and prices have plummeted 44 percent. Thomas Gale Moore writes:

Given the gains that deregulation has created for railroads and their customers, why would President Biden want to reregulate? The answer, I believe, can be found in two things: 1. the narrow view of competition that many officials in the Biden administration hold, and 2. those same officials’ failure to understand what economists call “the information problem.”

If you took only one microeconomics course and never spent much time looking at flesh-and-blood competition in the real world, you might hold the Biden administration’s view of competition also.

According to this view, an industry can’t be truly competitive unless there are many small firms competing with each other. The term economists use to describe this view is “perfect competition.” Under perfect competition, firms in an industry all produce the identical product and charge the exact same price. That isn’t perfect at all; it’s just boring. Under real-world competition, by contrast, firms compete by introducing new products, enhancements to existing products, products tailored to specific consumer groups, etc.

There are only seven major railways in America and, on some routes, only two railways. Yet, competition is intense. How else can one explain the aforementioned drop in rail rates paid by shippers?

But the Biden administration, with its narrow view of competition, is considering intervening to set rates on “reciprocal switching agreements.” Reciprocal switching occurs when railroad A, which has access to a particular shipper, switches railroad B’s traffic to that shipper when railroad B does not have access. These agreements come about even when the STB does not force them into access. That is, they are often voluntary.

So why does the Biden administration think that some forced reciprocal switching agreements are needed? The reason must be that at least some Biden officials think that the government can dictate the terms of such agreements that are better than those that railroads would agree to.

That means that a central government agency can’t know enough to be able to come up with efficient ways of dictating contracts and prices between railroads.

It is true that in some circumstances, shippers will be “captive:” they will be at the mercy of the one railroad that goes to or by their location. To deal with this, federal regulators adopted “Competitive Access Rules” in 1985.

These rules give the STB the power to force reciprocal switching. But to do so, the regulators must show a market failure and harm that results from that failure. The aforementioned Pociask and Sigaud write, “To be clear, since 1985, regulators have not found a single incident of anticompetitive actions by railroads that justified reciprocal switching.” If that is true, it seems that Biden’s proposed regulation is in search of a problem. 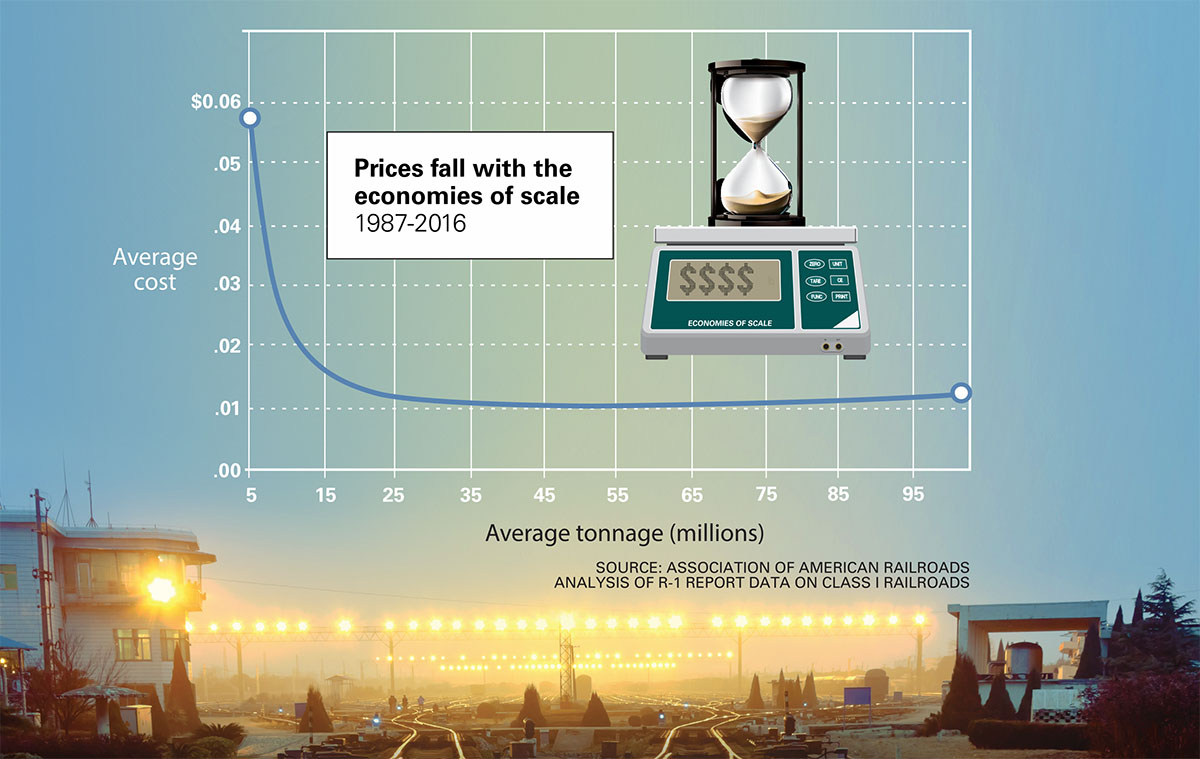 In Executive Order 14036, Biden also tasks the chair of the STB to “consider rulemakings pertaining to any other relevant matter of competitive access, including bottleneck rates, interchange commitments, or other matters.” Although his formulation is vague, one danger is that railroad A would be required to provide access to railroad B when it is not in railroad A’s interest to do so.

For instance, railroad B might impose more wear and tear on railroad A’s equipment and, yet, not be required to pay fully for this wear and tear. If that happened, then the new regulation would reduce railroad A’s incentive to maintain its rail. That kind of effect is what often happens when rent control prohibits a landlord from charging a high enough rent to justify maintaining an apartment. There’s no reason something similar couldn’t happen with railroads.

One thing railroads have going for them is that their rails are private property. This gives them an incentive to take care of their property. Roads used by trucks, by contrast, are typically government property and governments don’t typically charge enough to heavy trucks to compensate for wear and tear.

Ironically, therefore, new regulation could take one of the real virtues of the rail mode of freight delivery and whittle it away. Railroads would become more like highways and that’s bad, not good.

Don’t mess with what works

Deregulation of rail freight was one of the few success stories of the Carter administration. It’s a bad idea to return to the era of regulation, which was so harmful to railroad transportation.