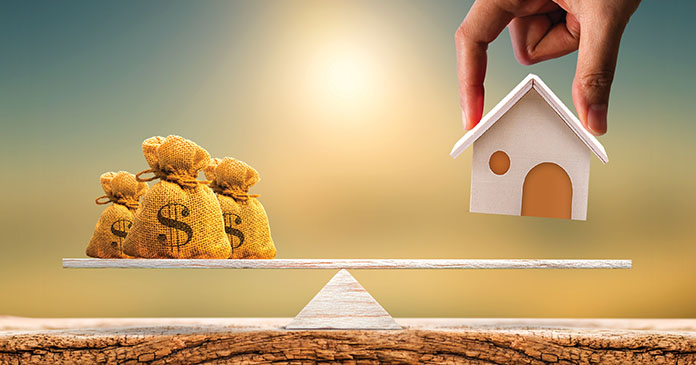 Before the onset of the pandemic, the percentage of tax-exempt private activity bonds (PABs) used for multifamily housing had been largely trending upward. The Council of Development Finance Agencies’ (CDFA) latest report shows this trend continued through 2020.

Specifically, more than $17.2 billion in multifamily PABs were issued by housing finance agencies (HFAs) in 2020, surpassing the previous year’s record issuance of $16.4 billion. Nationally, approximately $24.3 billion of the total $27.7 billion in PAB issuance, or 87.8 percent, went to housing. Moreover, nearly three-quarters of the PABs used for housing—$17.2 billion, or 71 percent—was issued to finance multifamily rental housing, and another $6.8 billion was issued to help low-income, first-time homebuyers. While multifamily PAB issuance increased in 2020, there was a decrease in bond issuance for single-family housing bonds of $2.4 billion from 2019, which accounts for the total decrease in PAB usage for housing from $25.9 billion in 2019 to $24.3 billion in 2020.

As they had in years past, HFAs in California issued the largest amount of multifamily PABs with $3.7 billion. It should be noted the 2020 figure represents a significant decrease in the state’s multifamily bond issuance; in 2019 HFAs in California issued a single-state record high of $5.4 billion in PABs. Given that the 2019 new PAB cap for California was $4.1 billion, a substantial portion of its 2019 issuance was from carryforward, which is not sustainable over the long term.

Additionally, new state records were set in 2020 by Utah, Kentucky, Maine, Louisiana and Idaho. In 2020, Massachusetts tied its 2019 record high. HFAs Florida issued more than $1 billion in PABs for the first time, joining California, Texas, New York and Georgia in this feat. The number of states with no multifamily bonds issued decreased in 2020 to four, two less than states with zero issuance in 2019 and 2018. Two states, Nebraska and Wyoming, reported no issuance in both 2019 and 2020. Iowa was the only state that failed to report its 2020 multifamily housing bond issuance.

Both in terms of single-year and long-term ranking, HFAs in California, New York and Texas have the highest multifamily bond issuance. Over 2000-2020, HFAs in these three states, along with Washington and Florida round out the five highest average ranking. In 2020, HFAs in Florida had the fourth highest multifamily bond issuance, followed by those in Georgia. The 2020 report shows that HFAs in the District of Columbia and Washington issued multifamily bonds in excess of their PAB cap; in 2019, multifamily issuance alone in California and Washington was in excess of 100 percent of the states’ PAB caps. Compared to 2019, 2020 data reveals that fewer than half as many states had total PAB issuance in excess of their annual cap; in 2020, HFAs in eight states—California, the District of Columbia, Massachusetts, Minnesota, New Mexico, Rhode Island, Utah and Washington—issued more than their annual cap, compared to 15 states in 2019.

Though fewer states are oversubscribed, the fact that HFAS in any states are issuing PAB in excess of the state’s cap means there could be unmet demand for PABs. One way to address the demand for PABs would be to lower the “financed-by” test from 50 percent to 25 percent. Also known as the 50 percent test, this threshold refers to the requirement PAB-financed properties must meet in order to qualify for the maximum amount of 4 percent low-income housing tax credits (LIHTC). Proponents of lowering the 50 percent test point to the unsustainability of issuing PABs in excess of the annual cap; lowering the threshold would allow for a more efficient use of PABs for LIHTC properties. This proposal has been included in a number of major housing legislation introduced recently including H.R. 5376, the Build Back Better Act (BBBA), President Joe Biden’s human infrastructure plan, as well as the Decent, Affordable, Safe Housing for All (DASH) Act, which drew heavily from the Affordable Housing Credit Improvement Act (AHCIA, H.R. 2573, S. 1136). 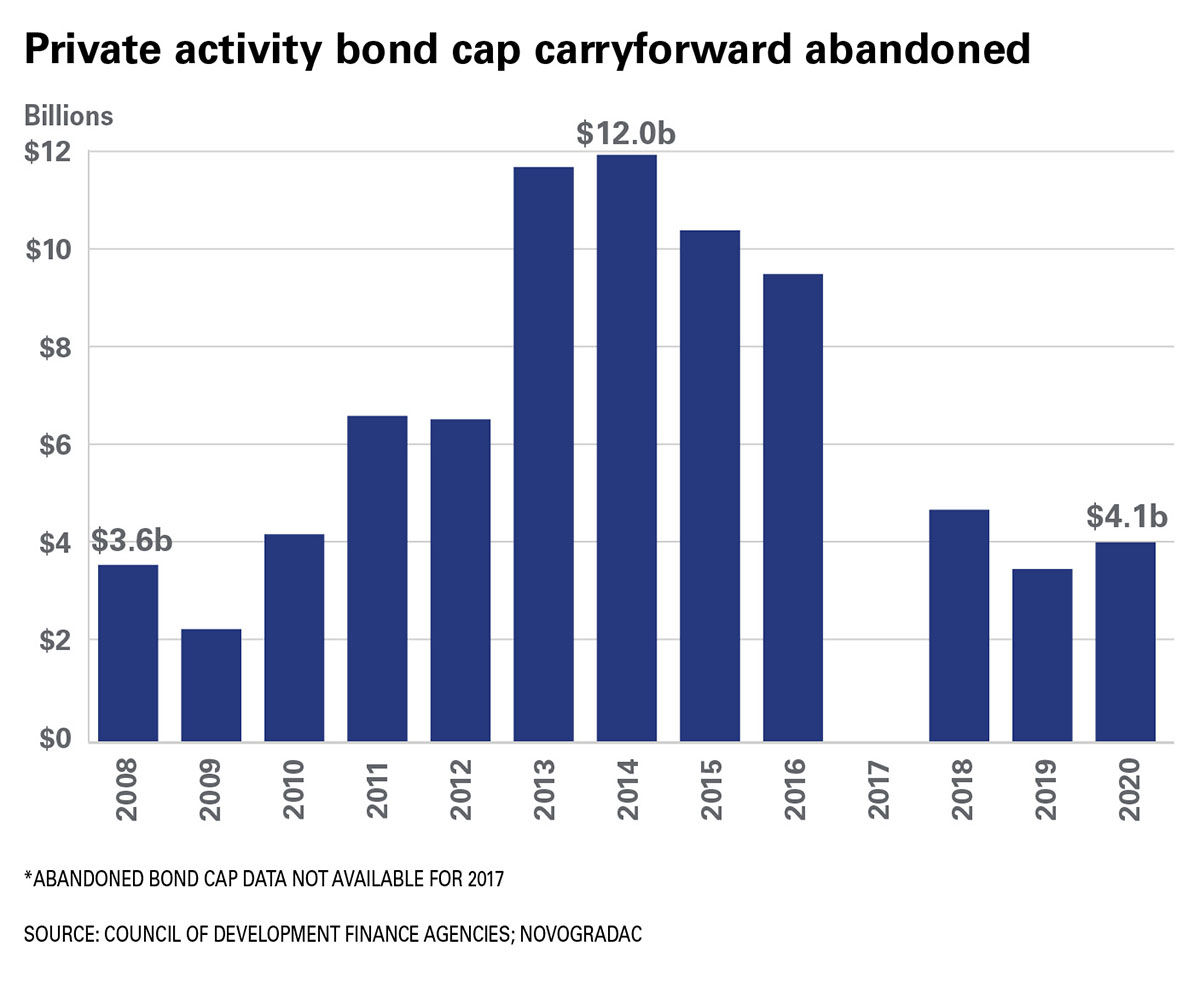 In the event HFAs in a state do not issue bonds in the amount of its annual cap, the unused bonds may be carried forward for three years. After three years, unused PAB cap carryforward will expire. After two years of decline, in 2020, $46.5 billion in bonds were carried forward, a 16.5 percent increase over the $39.9 billion amount reported in 2019. This supposed increase in carryforward could be misleading; in 2020, two one state did not provide carryforward information, compared to seven states in 2019 that did not report on their carryforward amounts. Four states—Connecticut, Iowa, New York, and Wyoming—reported in 2020 there would be no carryforward into 2021. This could speak to the rising demand for bonds.

Clearly there is a relationship between the amount of bonds issued each year and the amount of carryforward, meaning, the more bond cap issued in a given year, the less that is available to be carried forward. The CDFA report shows that all but one state, Kansas, reported carryforward data. Carryforward in six states—Georgia, Arkansas, Washington, Massachusetts, North Carolina, California—equaled less than 50 percent of their annual 2020 bond cap. The overall percentage of carryforward states reported increased in 2020 to 124 percent of their annual cap, an increase of 17 percentage points over 2019. With the increase in carryforward reported in 2020, even though there is still an overall downward trend in carryforward as a percentage of annual cap, housing proposals like lowering the 50 percent test would improve states’ ability to efficiently use their private activity bond cap.

Though the amount of abandoned PAB cap increased 15 percent in 2020, the fact that more states reported no abandoned carryforward—29 in 2020 compared to just 9 in 2019—could mean that just a few states’ inability to issue all their carryforward had had an outsized effect on the 2020 statistics. For instance, West Virginia, Kentucky and Illinois reported increases in the amount of abandoned carryforward of 109 percent, 164 percent and 309 percent, respectively, in 2020.

The ongoing affordable housing crisis, further exacerbated by the COVID-19 pandemic, has proven how crucial it is that all available tools are used to expand the country’s affordable housing supply. Multifamily PABs play an integral role in supporting affordable rental housing, particularly LIHTC-financed homes. Through 2020, the most recent year for which data is available, more than 1.3 million affordable rental homes generated LIHTCs through PAB debt financing, as reported in National Council of State Housing Agencies’ (NCSHA’s) Annual Factbook. These homes represent more than one-third of all LIHTC financed homes. The record high multifamily PAB issuance means additional funds will be available to further support expansion of the country’s affordable rental housing supply. Yet, the overall competition for PABs, multifamily issuance is just one of 27 eligible uses for PABs, means that the continued record usage of PABs for multifamily is not guaranteed. The best chance of passing housing provisions that would increase efficiency and expand usage of PABs, like lowering the 50 percent test, is to have them included in the BBBA currently being negotiated in Congress. The most recent version of the BBBA framework includes a temporary reduction in the 50 percent test. Though President Biden has been very vocal about the importance of ensuring Americans have access to safe and affordable housing and now, under this administration, is the best time to push for the inclusion of these measures in major legislative packages, negotiations could see housing provisions cut from the original proposal. Even with the support of the administration, affordable housing proponents should continue to reach out to their members of Congress, urging them to keep the originally proposed housing provisions, like lowering the 50 percent test, intact as the reconciliation bill moves forward.