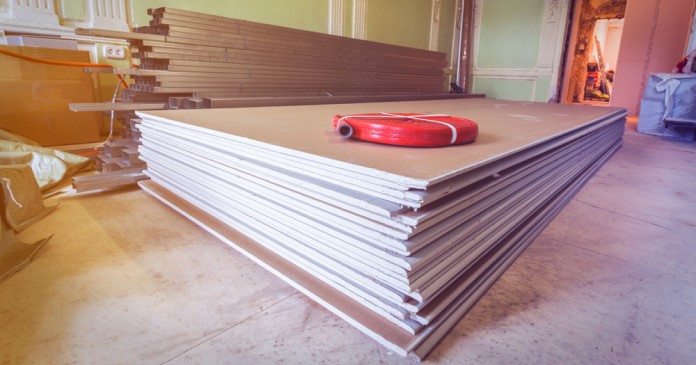 The Bureau of Labor Statistics (BLS) released its producer price index report for May 2022. It stated that construction materials prices were up 1.1 percent in the month, seasonally adjusted. The index was 18.2 percent higher than its year-earlier level.

Overall prices for processed goods for intermediate demand rose by 2.3 percent in the month. This index was 21.6 percent higher than its year-ago level.

For reference, the changes in these indices compare with an 8.6 percent rise in the all-items consumer price index (CPI-U) for the 12 months ending in May. The CPI-U was up 1.0 percent for the month. The shelter portion of the CPI was up 5.5 percent from its year-ago level.

Yield Pro compiled the BLS reported changes for our standard list of construction materials prices. These are prices of materials which directly impact the cost of constructing an apartment building. The first two right hand columns of the table provide the percent change in the price of the commodity from a year earlier (12 Mo PC Change) and the percent change in price from April 2022 (1 Mo PC Change). If no price data is available for a given commodity, the change is listed as N/A.

The first chart, below, shows the price index history for wood products over the past 37 months. Note that the prices used by the BLS in compiling the indexes are collected on the Tuesday of the week containing the 13th day of the month. In May 2022 that would have been May 10. 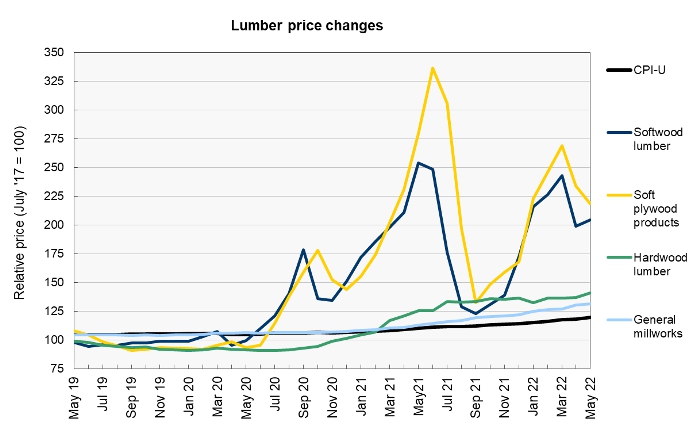 In May, the price of softwood lumber rebounded slightly after falling during April. However, the price in April was revised downward by 0.6 percent, accounting for part of the reported increase. The drop in the price of lumber compared to the year-ago level is largely because lumber prices were exceptionally high then. The comparison to the pre-pandemic price level gives a more realistic idea of how lumber prices have run up in the last two years.

Markets Insider reports that the market price of lumber has been trending downward since peaking in early March. The price closed at $528 on June 13, down $479, or 48 percent, since our last report. Lumber prices in the futures markets fell over the past month, leaving them well below the month-ago levels. The September 2022 futures contract opened at $537 on June 14, down $233 since our last report. The November 2022 contract was at $550.

In May, soft plywood products prices were reported by the BLS to be down 6.7 percent. However, the April price was revised downward by 8.2 percent this month, by far the largest downward revision for any of the prices we track. Without that revision, the reported price decline would have been 14.4 percent. Still, soft plywood prices were up 136 percent from their level around January 2020, the largest increase of any of the construction materials prices we track.

The next chart, below, shows the recent history of several other construction materials prices. These are relatively simple commodities whose prices are strongly driven by those of the materials of which they are comprised. Prices for hot rolled steel, nails and power wire are all up significantly over the last year. Gypsum prices also moved up this month, rising 6.6 percent. This is the highest rate of increase for the month for any of the construction materials prices that we track. 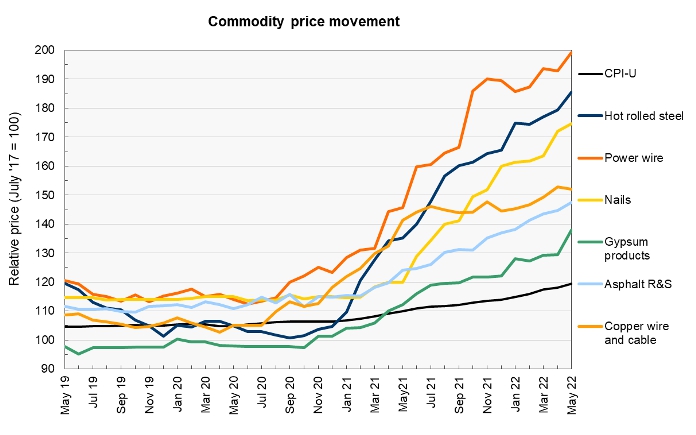 MarketWatch reports that, since our last report, the NYSE American steel index rose to $1,900 and then fell, leaving its level slightly lower than we last reported. It closed on June 13 at $1,606, down $33 from its level of a month ago. Steel futures have also moved lower over the last month. The September 2022 contract traded on June 13 at around $948, down $122 since we last reported on it. The November 2022 contract is at $925.

The price of copper has also been up and down since we last reported on it. It closed as high as $4.55 per pound on June 2, but is now trading at around $4.22 per pound. This is essentially the same price it was in our last report.

The price of aluminum has also been trending downward since early March. It closed on June 13 at $2,686, down $92 since our last report.

In last month’s report, we commented on the price of mineral wool insulation taking a jump of 9.3 percent during the month. However, in this month’s PPI report, the mineral wool price index for April was adjusted downward by 7.3 percent, so the April price increase was not nearly as large as first reported.

Price changes for several of the more finished goods from our sample are illustrated in the final chart, below. While all of them have seen double-digit percentage increases over the past 12 months, unlike many of the other construction materials prices that we track, the increases for these commodities are all under 20 percent year-over-year. 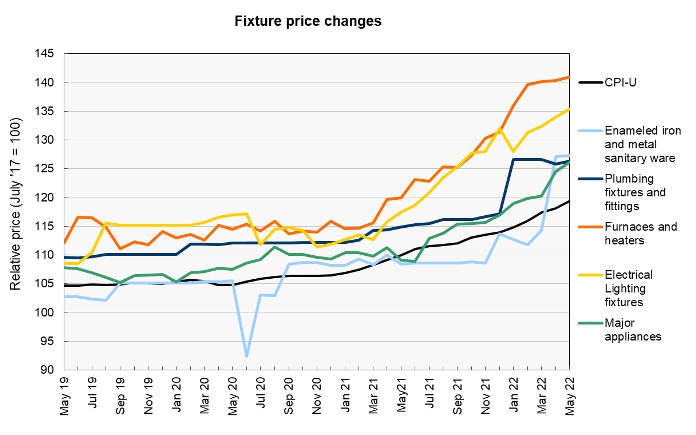