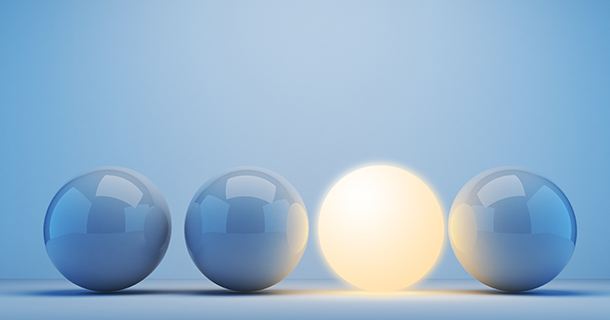 What goes for novelists goes for leaders searching to craft a novel strategy for their company, a new product for their customers, or a better way to organize their employees. In a world that never stops changing, great leaders never stop learning.

Today, the challenge for leaders at every level is no longer just to out-hustle, outmuscle, and out-maneuver the competition. It is to out-think the competition in ways big and small, to develop a unique point of view about the future and help your organization get there before anyone else does. Which is why a defining challenge of leadership is whether you can answer a question that is as simple as it is powerful: Are you learning as fast as the world is changing?

Of course, learning new things is all about exposing yourself to new ideas. So if you want to learn faster, you’ve got to think differently about where new ideas come from. Here are a few ideas I’ve developed over the years about what turns leaders into learners-three “habits of mind” that will help you keep learning as fast as the world is changing.

First, the best leaders (and learners) have the widest field of vision. After Steve Jobs died, I, like everyone else, read and watched as much as I could about his life and work. One of my favorite sources of insights was an old PBS documentary called “Triumph of the Nerds,” in which luminaries of Silicon Valley talked about what inspired their innovations. As Jobs talked about the original Macintosh computer, he talked less about semiconductors and software than he did about painting, music, and art.

“Ultimately it (creativity) comes down to taste,” he explained. “It comes down to trying to expose yourself to the best things that humans have done and then trying to bring those things in to what you’re doing. I think part of what made the Macintosh great was that the people working on it were musicians and poets and artists and zoologists and historians who also happened to be the best computer scientists in the world.”

Translation: You’re not going to learn faster (or deeper) than everyone else if you seek inspiration from the same sources as everyone else. Educators know that we learn the most when we encounter people, experiences, and ideas that are the least like us. And yet, we spend most of our time with people and in places that are the most like us-our old colleagues, our familiar offices, our reassuring neighborhoods. If you want to learn faster, look and live more broadly.

Second, and more tactically, the best source of new ideas in your field can be old ideas from unrelated fields. A few months ago, after I gave a talk about innovation to a gathering of executives from the world of food retailing, one frustrated member of the audience asked for some advice about dealing with her boss. “My boss likes to say, ‘I want a totally new idea-and three examples of where that idea has worked before.'” The audience roared in recognition of the oxymoronic absurdity of the boss’s sentiment, as did I.

But then I got to thinking. Often, it turns out, a powerful source of “totally new” ideas in one industry can be standard operating procedures from another industry-wellestablished practices that look downright revolutionary when you simply move them from one place to another.

For example, leaders at Lexus identified all sorts of new ideas to reshape the customer experience for luxury cars by searching for clues at brands such as Four Seasons and Apple-companies that were great at what they did, even though what they did had nothing to do with automobiles. Physicians and administrators from London’s Great Ormond Street Hospital for Children redesigned many of their surgical procedures by studying how Ferrari’s Formula One racing team handled pit stops.

Finally, and most personally, successful learners work hard not to be loners. These days, the most powerful insights often come from the most unexpected places-the hidden genius locked inside your company, the collective genius of customers, suppliers, and other smart people who would be eager to teach you what they know if you simply asked for their insights. But tapping this learning resource requires a new leadership mindset- enough ambition to address tough problems, enough humility to be willing to learn from everyone you encounter. Nobody alone learns as quickly as everybody together.

We all want to be better leaders. And the best leaders, it turns out, are the most insatiable learners. How are you learning as fast as the world is changing?