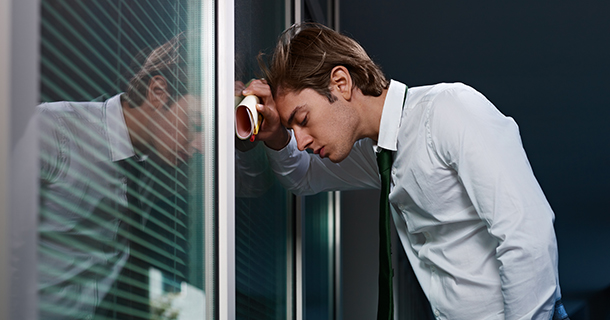 The only hitch was that Ben, as a teacher, had to be at work early, so our matches could begin no later than 6:00 a.m. For over a year, we kept up the ritual-until I finally realized I was so exhausted from the early mornings, I wasn’t productive the rest of the day.

Goal setting can be powerful. It’s important to periodically look at your priorities and ensure you’re doing the things that matter, whether it’s seeing friends, getting healthy, or making more sales calls. But it’s equally important to re-evaluate those goals to ensure they’re still appropriate. At my gym-the same one I visited with Ben- there’s a huge banner with a Lance Armstrong quote: “Pain is temporary. Quitting lasts forever.” But I’d like to suggest there are three very good reasons to abandon your goals.

When your goals have adverse consequences. Just as predicted with my squash plan, I enjoyed seeing Ben frequently and I lost ten pounds over the course of the year. But I also made the erroneous assumption that over time, I’d learn to wake up gracefully at 5:15 a.m. Despite the benefits of the routine, I eventually realized the cost-my fatigue and lost productivity-was too great to keep it up.

When your goals impede other objectives. A while back-driven by stress-I decided to schedule in my “life balance.” Planner in hand, I’d spend Sunday nights carving out weekly time for friends (four hours), working in coffee shops (four hours), networking (three hours), and the like. I tried my new schedule for months, dutifully monitoring my time allocation to ensure I’d checked off the boxes and was leading a balanced life. But my stress level never seemed to go down, and I realized scheduling my life was actually impeding my enjoyment of it. I constantly felt boxed in, with no room for spontaneity.

Today, I have looser guidelines for myself, and perhaps less balance, but I’m enjoying myself more.

When your goals are no longer appropriate. I recently received an attractive job query: Would I like to become the communications director for a prominent elected official? A decade ago, I certainly would have; back then, I spent hours crafting my resume and badgering my contacts to recommend me for a job very much like the one I was now being offered. It almost felt like a betrayal of my 20-something self to say no-but I did, anyway. In the intervening years, I had served in positions similar enough to satisfy my curiosity, and now, as a consultant, I had contracts and commitments to honor. The right goals for you now aren’t necessarily the ones you set in college, or five years ago, or even last month.

“Winners never quit, and quitters never win-that’s what they told us on the Little League field. But in business, and in life, sometimes quitting is the best thing you can do.