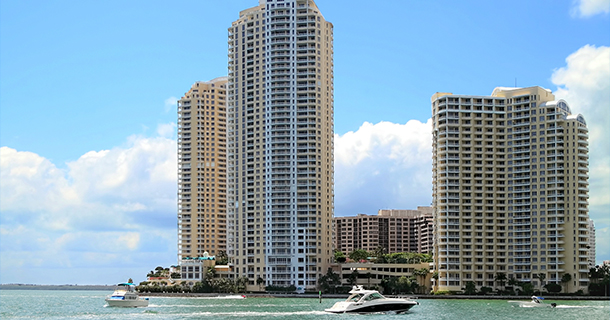 The two groups are spawning a fundamental shift in housing and a fledgling boom in the construction of new apartments for the first time in years. It is a national trend that is crystallizing in South Florida with rental apartment projects in the works in cities ranging from Plantation and Davie to Doral and Coral Gables.

“Rentals will be in demand for a while. The pendulum has swung,” said Mahesh Pattabhiraman, chief lending officer for Miami-based Apollo Bank, which in May made a land-acquisition loan to Miami’s Adler Group, a major commercial developer that plans to build two 20-story rental apartment towers near the west end of 79th Street Causeway in a joint venture with ECI Group of Atlanta.

“A lot of people with bad credit won’t qualify to buy a home. And because of the crisis, some people are not convinced it’s the right time to buy,” added Pattabhiraman.

Like Adler, other major South Florida developers with specialties in areas such as luxury condominiums and industrial parks are refocusing on rental apartments to capitalize on the strong demand and the availability of financing.

“Everybody is jumping on the bandwagon,” said Armando Codina, a prominent Miami developer of industrial parks and commercial projects who has turned his attention in a big way to rental apartments, with projects in various stages from Doral to Davie. “The fundamentals are right. This is not a trendy thing,” said Codina.

Codina announced that his Coral Gables-based CC Residential has formed a partnership with AREA Property Partners, a New York real estate investment giant, to develop rental apartment projects in South Florida. The alliance includes two projects in which Codina has already broken ground: a 352-unit project renamed The Signature at Doral, at Doral Boulevard (NW 41st Street) and the Homestead Extension of Florida’s Turnpike, and a 350-apartment project on Davie Road between SW 29th Street and SW 31st Street, renamed The Signature at Davie.

AREA’s CEO for North America, Richard Mack, said his firm’s recent success in acquiring a troubled condo project and turning it into an apartment complex on the Miami River called Terrazas River Park Village reinforced his view that the time is right for multifamily rental development. “It led us to conclude that rents are going to continue to rise and demand is going to continue to rise in a way to sustain new development,” Mack said.

Fueling the demand is the dearth of professionally managed apartment buildings in the wake of the condo-conversion mania of the last decade. Many multifamily rental apartments in the region were snapped up by developers, converted into condos and sold for quick profits.

Aside from a handful of rental apartment projects built during the boom, much of the rental availability in South Florida is in condominiums where investors bought units and are leasing them out.

Focus Real Estate is getting peppered with requests for market analyses by developers and investors interested in sizing up Miami.

“There is a feeding frenzy by rental apartment management companies, the big REITs,” said Werley, who believes the pendulum has shifted long term away from homeownership since the meltdown. “It went beyond rational. It got completely out of hand,” he said of the subprime lending fiasco, where banks were hawking loans to poorly suited borrowers.

With strong competition for rental apartments, Paul Riemer, a 23-year-old insurance account executive, said he felt “lucky” when he landed a one-bedroom rental unit in ICON Brickell owned by a Swiss investor last October. Other renters had beaten him to the punch on a couple of others in which he had interest. “People came in and outbid me,” he said.

One Broadway, at 1451 South Miami Ave. in the Brickell area, which was one of the rare professionally-managed rental apartment towers built in Miami during the last boom, enjoys consistent occupancy above 95 percent, drawing heavily on young professionals like Nastassia Luisis, a marketing manager who loves the urban vibe.

While the American Dream of homeownership hasn’t disappeared, more people are seeing renting as the best option for where they are in life now.

The 18th-floor, two-bedroom condo that Benjamin Wilson rents at ICON Brickell has 1,500 square feet overlooking a gleaming pool with amenities including a spa and fitness center. But the clincher that keeps the 35-year-old real estate attorney as a renter and not a home-buyer out in the suburbs is the minutes it takes to commute to his law office at Shutts & Bowen.

“I go ahead and choose to rent,” said Wilson, who moved to Miami from Kentucky. “The kind of home I’d want to buy would be at an astronomical price. And if I was in Pinecrest or Kendall or even Coral Gables, then I’d have to deal with the traffic as an attorney working a lot of hours.”

Wilson ticked off other advantages such as lifestyle flexibility, freedom from property taxes and condominium fees, and not having to ante up a huge down payment. And the condo has no objection to his 65-pound English bulldog, Rodney.

“This craze society went through-that at the earliest age if you can buy a house you have to buy a house-really wasn’t good economics,” said Michael M. Adler, CEO of Adler Group. “It’s much healthier for a community to have a balance between ownership and rentals.”

The bullish market dynamics have big institutional investors like insurance companies, real estate investment trusts and pension funds champing at the bit to invest as long-term owners of apartment buildings for the steady stream of revenue. That demand is making banks comfortable with financing construction of apartments even as they routinely snub new condominium deals.

Indeed, among the handful of condominium projects going up since the collapse, most are financed by getting foreign buyers to plunk down cash in advance to buy units in the building.

“You cannot get construction loans for condos-but you can for rental towers,” said Peter Zalewski, a principal with Bal Harbour-based Condo Vultures Realty, who predicts some of the new rental construction will end up getting converted to condominiums as soon as the market improves.

But for now, apartments are the hot play for developers.

Jorge Perez’s Related Group, which was one of Florida’s largest and flashiest luxury condominium developers during the boom, has dived into new apartment construction to seize the opportunity. Its Related Development arm is touting plans for a “pipeline” of nearly 4,000 units stretching from Tampa to Miami in various stages of planning and execution.

In Plantation, Related’s six-story Veranda project is under construction at 599 NW 82nd Avenue with 197 units planned for leasing in the summer of 2013.

Related said it expects to break ground soon on the first of two 360-unit complexes at Doral View, a three-story, garden-style project. It also plans a 24-story tower with 249 units, Allied Marine, in downtown Fort Lauderdale.

Steve Patterson, president of Related Development, which is focusing on apartment construction, said the stars have aligned for apartment living to take off.

“Home ownership has dropped significantly. Look at the problems people are having with credit: It’s still hard to get a mortgage,” he said. “And baby boomers don’t want to deal with the headaches of a broken pipe.”

Added Matthew J. Allen, chief operating officer of Related Group: “There is a big uncertainty in buying a home and whether it will hold its value. That is contributing to people wanting to rent.”