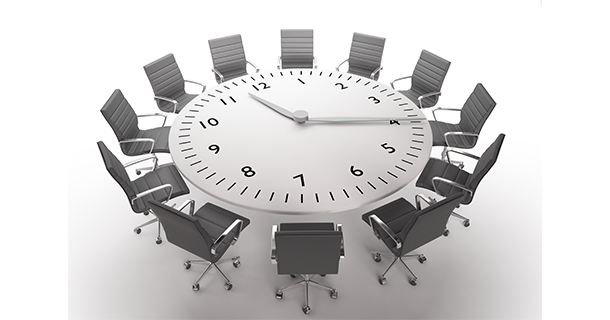 That’s because nearly all meetings succumb to a few pet peeves-those annoying happenings that derail the meeting’s purpose, waste time, and cause frustration.

While any meeting can become derailed, it’s the process-oriented, information sharing meetings that most business people dislike, yet are the most common. While the role of this type of meeting is to keep others informed and to learn how what they’re doing fits in the big picture, many people leave these types of meetings feeling confused, aggravated, and sometimes, overwhelmed.

This is a huge problem for business, because if a meeting isn’t informative at the very least, and enjoyable at the most, then the company is wasting a lot of money getting people together. Additionally, if your meetings aren’t on the mark, you’ll get the reputation for holding poor meetings, which erodes morale and productivity.

To ensure your meetings are effective, informative and enjoyable, be aware of the top five meeting pet peeves and avoid them at all costs.

Not having an agenda or not sticking to one
The top three rules for Toastmasters are to start the meeting on time, end it on time, and always have an agenda. This rule should be true for business meetings, too.

Having an agenda is not only simple courtesy, it also tells attendees that the meeting has a goal and will be productive. An agenda gives the meeting facilitator control over the meeting’s flow, keeps the meeting on task, and reduces confusion among participants. Realize that the agenda does not need to be elaborate; a simple bullet list of topics is all you need to prepare.

Remember to send the agenda out a day or so before the meeting so attendees can prepare. And if you forget to send it out early, bring copies of the agenda to hand out when the meeting starts.

On meeting day, stick with the agenda. If a topic comes up in conversation that is not on the agenda, offer to address that topic after the meeting. This way you keep the meeting on schedule and don’t derail the meeting’s purpose.

Lack of facilitation
Some people mistakenly believe that meetings run on their own-that all you have to do is get a group of people together in a room and they’ll automatically produce good results. Wrong. Getting the people together is the easy part; leading them in a productive discussion takes skill. That’s why solid meeting facilitation is so critical.

The facilitator’s job is to control the flow of the meeting, to help attendees work together, to provide structure to the meeting, and to get everyone involved. When attendees are allowed to have their cell phones ringing during the meeting, when one or two people are permitted to dominate the conversation, or when it’s acceptable for key people to not contribute to the discussion, good facilitation is lacking. Therefore, make sure all your meetings have an effective facilitator at the helm.

People arriving late to the meeting
How many meetings have you arrived to on time, only to have the meeting start late as everyone waits for others to show up? Even worse, if the meeting does start on time, it restarts 10 minutes later when a few people straggle in. Rather than continue with the meeting, the facilitator attempts to bring the late comers up to speed by rehashing everything that was just covered.

But why penalize the people who arrived on time? A better approach is to close the door when the meeting starts and put a note on the door that says, “Meeting in Progress.” Those who arrive late will know to sneak in as inconspicuously as possible and, hopefully, they won’t make the same mistake next time. Additionally, unless the late person is the boss, don’t restart the meeting later. When meeting start times are enforced and honored, people will make the effort to be on time.

Using PowerPoint when it’s not needed
PowerPoint is an essential business tool, but it’s not effective for all meeting types. Unfortunately, many people believe that all meetings require the use of PowerPoint. Not true. Typical information sharing meetings require a facilitator asking questions and everyone contributing in round-robin style. Watching someone read PowerPoint slides is not how these meetings should run. After all, if people simply needed to read pages of text, you could just send them the file and skip the meeting completely.

Of course, if your informational meeting needs more of people’s senses involved, then use PowerPoint to add that visual component. Likewise, if you’re combining everyone’s data and showing it in chart or graph form, PowerPoint is great. But don’t use PowerPoint just for the sake of it. Know why you’re using it, and then do it right.

Listening to an unprepared or ineffective speaker
Nothing is worse than listening to a monotone speaker who says “um” or “ah” every other word, or having someone start their portion of the meeting by saying, “I really didn’t prepare anything for this, so let’s just wing it.”

While everyone should speak and offer ideas at these meetings, some people may have to give more thoughtful, polished information. These people should be identified beforehand so they have time to prepare. This is crucial, because in most organizations, to be promoted you must have solid public speaking skills.

Additionally, if someone simply isn’t good at giving presentations, no matter how much preparation he or she does, that person needs to get support and training to become more effective. Granted, no one wants to tell a colleague, “You need to work on your public speaking skills,” but offering support to others will not only make meetings more effective, it will also make the company stronger.

Do your part
Business meetings are a mainstay in our work-world, so no matter what you think of them, they’ll never go away. Knowing this, isn’t it time we all work to avoid the top meeting pet peeves? If we all do our part, we can make meetings more enjoyable, more productive, and more meaningful for everyone involved. And that’s one kind of meeting everyone will love to attend.