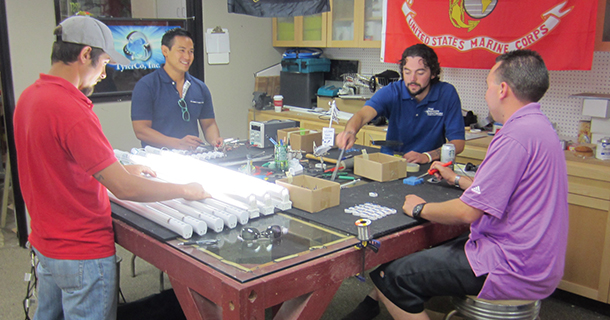 Ashoff manufactures fluorescent lamps with motion sensors. He designed it to replace bulbs in building stairwells which burn around the clock, and found that they slash energy costs for stairwell lighting by 97 percent. Ashoff’s lamp snaps into the existing fixture; it’s the same size as a standard 4-ft. fluorescent tube.

Southern California Edison estimates there are 12 million fluorescent lights in building stairwells throughout its territory. Other estimates place the total at 58 million nationwide with untold millions in parking garages, all totalling, billions of dollars in annually costs. Ashoff’s BANFALite sells for $125. At 15 cents per kWh, every lamp that is replaced pays for itself in 19 months and saves $80 a year, he said.

In April, Ashoff’s first 1,000 unassembled BANFAlites arrived from China, where its components are made, and delivered to his shop in Irvine, Calif. He realized he needed help assembling them.

“My girlfriend suggested I hire her son to assemble the lamps,” Ashoff said. “He was a dog-handler in the Marines, sniffing for bombs similar to the guy in the movie, Hurt Locker. But he’s been unable to find a job and was struggling. After a few days, he came to me saying he had four friends, also Marine vets, who were in the same boat.”

Ashoff reflected, “I had no idea what their situation was or what I stepped in. They’re all suffering from the effects of the war, losing their youth, and more, doing a job for us. Now they work around a table, happy, joking, talking about things that normal 22-year-olds talk about.”

Ashoff has a plan. He’s looking to set up similar assembly “units” and sales operations in other locations with what he called “pods of Marines.” For now, he’s busy gathering orders for his lights.

Early reaction to Ashoff’s product has been positive, he said. He’s completed some installations in Orange County buildings, including The Plaza condominium towers at Jamboree and Campus Drive. Recently, after only a few minutes into a presentation to Kaiser Permanente, hospital directors placed order.

Ashoff now has a five-minute rule: If they doesn’t get it in five minutes, I say, ‘thanks,’ and move on. Too many people to talk to.”

Ashoff says he has lived on Balboa Island for 30 years while traveling to and from China since 1982, manufacturing beveled glass. With the recession, he landed on an idea to backlight decorative stone countertops with a low-wattage device he invented and patented. When his product was showcased three years ago at CleanTech in San Jose, Calif., he was approached by two Edison representatives. They liked his device, SlabLite by TylerCo Inc., and asked about other ideas, leading to discussion about an energy-saving solution for stairwell lighting. This is a hot-button issue for several utilities and Professor Michael Siminovitch, director of California Lighting Technology Center at U.C. Davis has led a number of studies on the topic.

Edison sponsored Ashoff into its TRI program with San Diego Gas & Electric and PG&E, giving him information and guidance that led to his development of BANFAlite. Without any subsidies, Ashoff says, BANFAlite sells for half the cost of its nearest competitor. Consolidated Electrical Distributors, Laguna Niguel, Calif., handles distribution.

The unexpected benefit to Ashoff has been his introduction to the world of returning veterans.

“I’m a guy who did everything to avoid being drafted during the Vietnam War. To have these brave guys come up and thank me, to tell me they’re healing themselves by building this lamp, was something I wasn’t ready for. The first two weeks were pretty emotional for me,” laments Ashoff.

The individuals employed by Ashoff are fresh out of the Marines. They have issues, but don’t know why. “My parents gave me the power to fail,” says Ashoff. “I tell these guys the same thing. They are impressive young men, every one of them. They’ll all work themselves out of it.”