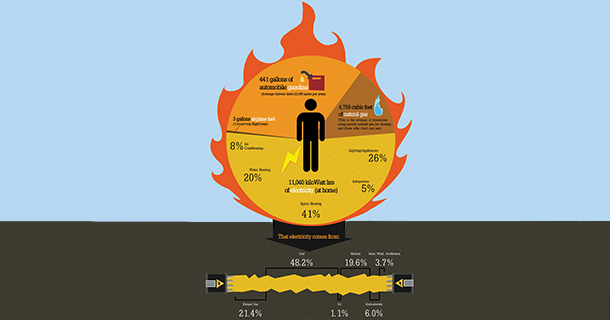 Coal formed the foundation of American industrialization in the 19th century. Between 1850 and 1900, coal’s consumption in America rose from 10 percent to 70 percent. After opening the world’s first hydroelectric power plant on the Fox River in Appleton, Wisconsin, in 1882, hydropower also grew into a major player.

Initially, its contribution to electrical generation in the U.S. grew from 40 percent during the early 1900s, to nearly 75 percent in some regions by the 1940s. Hydroelectricity has since retracted significantly in its contribution to U.S. energy, as has coal, though coal still plays a major role. Petroleum now stands as the major source for American energy consumption with a roughly 37 percent market share.

Oil was developed as an affordable source of energy during the mid-to-late 19th century with the aid of successful businessmen such as John D. Rockefeller. Rockefeller, however, ignited the ire of many, including leaders such as Teddy Roosevelt, and government intervention was quickly sought to break up the alleged monopolistic tendencies of Standard Oil.

Further government regulation and promotion of energy sources was encouraged under Franklin Roosevelt during the days of the Great Depression. Declaring that America was “most certainly backward in the use of electricity,” FDR specifically promoted the use of electrical energy by signing a bill that sought to bring electricity into the homes of many rural farmers. While suppressing private industry’s abilities to electrify the country, FDR had the federal government take much of the lead in electrification.

Seven years later, after focused governmental attention on energy policy (including the creation of organizations like the Rural Electrification Administration and the Tennessee Valley Authority), America was using more electricity per capita than any other nation, and FDR began urging conservation: “Our energy resources are not inexhaustible, yet we are permitting waste in their use and production. In some instances, to achieve apparent economies today, future generations will be forced to carry the burden of unnecessarily high costs and to substitute inferior fuels for particular purposes.” He would not be the last president to advocate against energy gluttony.

With the end of World War II, President Truman, albeit acknowledging its potential for destruction, considered the development of nuclear power “more revolutionary than the invention of the wheel, the use of metals, or the steam or internal combustion engine.” Congress subsequently passed the Atomic Energy Act, a law that sought to use atomic energy to “improve” the public welfare, increase the standard of living, and strengthen free competition in private enterprise.” But distrust in the safety of nuclear energy has thus far prevented it from comprising a large chunk of American energy consumption.

The energy crises of the 1970s prompted leaders such as President Jimmy Carter to argue that America was “running out of gas and oil,” and to urge a policy of “strict conservation” and the implementation of “renewable energy sources.” Energy policy now predominantly focused on protecting the environment, reigning in energy use, and making alternative energy options viable—goals in which the newly-created Department of Energy would seek to play a vital role.

Reagan criticized Carter’s approach, claiming that America was an “energy-rich” nation that needed to focus on producing more of it rather than taxing and regulating it. Bush, Sr., too, sought to increase domestic energy production, although more for security reasons. This was particularly true of “environmentally-sound and cleaner fuels like ethanol, methanol, electricity, propane, natural gas, and cleaner gasoline.”

But for the subsequent administrations of Bill Clinton, George W. Bush, and Barack Obama, increasing public concerns over the many costs of fossil fuels, environmental impacts of energy production (particularly global warming), limitations on the use of fossil fuels, and the quest for clean, renewable energy have become essential to American domestic energy policy.

Today, such discussions center on our dependence on oil, the disappearance of fossil fuels, means of fighting global warming such as the Kyoto Protocol and cap-and-trade, ways to facilitate transitions toward alternative sources of energy such as ethanol, wind, and solar, special interest maneuverings, and logistical challenges in creating and enforcing cohesive policies across multiple government agencies.

Debates also focus on the costs and benefits of taxpayer-funded subsidies for various forms of energy. According to the Energy Information Administration, subsidies more than doubled from $8.2 billion in 1999 to $16.6 billion in 2007. “Tax expenditures have more than tripled since 1999, rising from $3.2 billion that year to more than $10.4 billion in 2007.” The main beneficiaries of these subsidies have been renewables, refined (i.e. clean) coal, natural gas, and oil.

Speaking at the Energy Information Administration’s 2013 Energy Conference in Washington, D.C., Energy Secretary Ernest Moniz suggested that while many think the energy system is resistant to change, he believes a lot has changed over the last ten years. His goals include:

With the objective of reducing carbon emissions and mitigating climate change, the President recently announced a comprehensive plan to solve for these issues. It will:

In order to prepare the U.S. for the impacts of climate change, the plan:

President Obama notes: “Energy efficiency upgrades bring significant cost savings, but up-front costs act as a barrier to more widespread investment.” To help overcome this problem, the Federal Housing Administration will convene lenders and other stakeholders at a roundtable to identify options for factoring energy efficiency into the mortgage underwriting and appraisal process for homes.

In July the EPA released a complete upgrade for its popular Portfolio Manager tool. This tool, currently in use by more than 40,000 owners and operators to measure, track, assess, and report on the energy and water performance of more than 250,000 commercial buildings, will deliver a new interface, streamlined functionality, and improved usability. By 2014, the EPA will also add a multifamily rating system.

Rating the energy efficiency of a building is a complex and nonstandard process. It involves ranking a structure’s energy consumption patterns alongside a peer group, normalizing for factors like local climate and occupancy. Methodologies of assessing energy efficiency can take multiple forms. Although terminologies vary, ratings for the built environment typically fall into two categories:

Asset ratings involve an energy-use simulation to compare the projected efficiency of a building based on architectural and systems characteristics. Simulating a building’s energy performance is also a nonstandard process that varies by location. Methodologies use an energy model run on complex software. Others include energy audits, whereby engineers perform on-site testing to estimate performance. LEEDS is a good example, but focuses on new development.

The organization recognizes that many states and municipalities are implementing mandatory benchmarking and disclosure. In recognition of such, BOMA supports the creation of a national model building energy performance program, based on the Portfolio Manager to avoid a patchwork of regulations. It supports the creation of a model that is easy to use and understand, and promotes knowledge of building energy performance without hindering real estate transactions.

As part of any such program, utilities must be required to provide whole-building benchmarking data to building owners and managers, with disclosure limited to parties directly involved in a sale, lease or financing transaction.

BOMA also supports increased funding for the Energy Information Administration (EIA) to enhance their research and depth of data for Energy Star. With increased federal funding,Energy Star may provide more robust data to expand its 1 to 100 rating system to all commercial property types.

There has been a major shift away from mandatory regulations. These encourage environmental improvement, but do not compel it.

At present, only Boston and Seattle require benchmarking the energy performance of a building, and require data on energy consumption. Multifamily operators must have access to whole building data in order to accurately benchmark. However, wholebuilding data is often difficult to obtain. The barriers can include:

The Data Access and Transparency Alliance (DATA) works with utilities, regulators, and policymakers to improve accessibility; to advance policies and programs with this objective; and to inform government agencies, members of Congress, utilities, and utility commissions about best practices. With DATA’s support, the National Association of Regulatory Utility Commissioners (NARUC) adopted a resolution in 2011 calling on state regulators to facilitate better access for building owners to whole-building energy consumption data.

It is important to protect customer privacy while providing building owners the data they need to benchmark and make their buildings more efficient. A variety of strategies including data aggregation can be used to accomplish this goal.

But another barrier occurs when property leases are not structured to accommodate.

Green leases (also known as energy-aligned leases, high-performance leases, or energy-efficient leases) align the financial and energy incentives of building owners and residents so they can work together to save money, conserve resources, and ensure the efficient operation of buildings.

Using the Boy Scout motto, we best “be prepared”, for the future is upon us. Here’s a fast check list of must haves:

Energy management is more than saving money—it is about understanding processes and energy patterns on properties, setting realistic goals and monitoring progress, and protecting natural resources while leveraging alternative ones. Adopting a portfolio-wide commitment to best energy practices is one way that portfolios can meet today’s cost-cutting and long-term energy efficiency goals.

A formal energy management program helps document, understand and improve energy usage. In 2011, the International Portfolio for Standardization (ISO) released ISO 50001—Energy Management Systems (EnMS). This voluntary standard serves as a model to elevate energy management and conservation efforts by embedding awareness, best practices and increased value to your assets. With broad applicability across economic sectors, it is estimated that the standard could influence up to 60 percent of the world’s energy use.