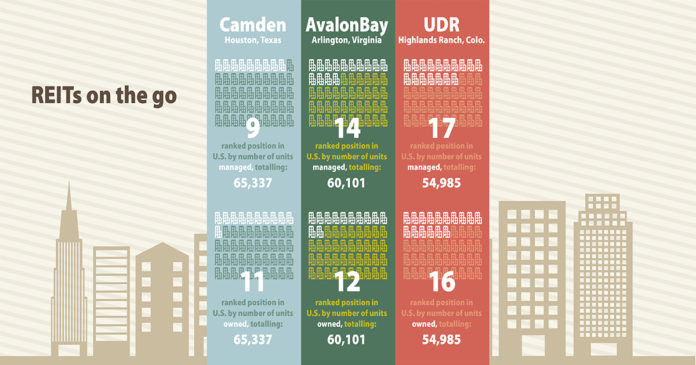 “I think we’re pretty well-positioned going into fourth quarter with an occupancy rate of 96 percent and that’s directly related to a specific tactic we undertook to make sure we got our occupancy rate up,” said Camden Property Trust President Keith Oden during the REIT’s Q3 2013 earnings call at the beginning of November.

“Our traditional pattern is fourth quarter falls off into the mid-94s and then that carries over to the first quarter. So, we thought we had sufficient strength in our markets that we could push occupancy and sustain it through the fourth quarter,” Oden explained.

The decision to push up occupancy in the portfolio was made in mid-August, with the dual goal of offsetting the seasonally weaker occupancy rates historically experienced in the fourth and first quarters and helping offset the additional days vacant caused by the ramp-up in Camden’s repositioning program.

The work on the $200 million revenue enhancement repositioning program is about half finished, said Oden. At a current run rate of about 900 apartments turned per month, running around $11,000 per unit, or in the neighborhood of $10 million a month, another $20 million is expected to be spent this year, with roughly $80 million left for next year’s spiff-up.

“Rehabs are awesome,” he said. “We ramped up the program significantly from what we thought at the beginning of the year because of the success we’ve had. But, the reality is that it takes you, incrementally, 14 more days to turn a unit that’s a reposition versus just doing a normal turn. So, we didn’t want to put that additional pressure in the fourth quarter without having something supplemental. So, we made a conscious decision to change the sustainable occupancy rate and we’re very pleased with the results.”

While the program that involves updating interior finishes at communities that are an average of 10 or 11 years old promises a 50-basis-point positive impact on samestore NOI when the work is finished, it has caused some disruption in the communities where it’s happening.

“So, we had a little more vacancy than we had anticipated and a little more disruption to the existing tenants. But, we’re actually getting a little bit more than we thought we would in premium, so, with that said, I think we’re sort of in the original zone that we talked about,” he said.

The solution to the vacancy issue was to tweak the company’s revenue management program’s sustainable occupancy rate, pushing it up one percent, which, Oden said, also was prompted by a desire to see what would happen if YieldStar’s occupancy target was manipulated.

“Well, guess what, it works. Within two to three weeks, our occupancy rate across our entire portfolio was up 100 basis points,” he said.

“The result of this decision is that we currently have a same store occupancy rate of 96 percent, or 90 basis points higher than in the fourth quarter of last year. Based on our current pre-leasing rates, it looks like we should be able to sustain a 95 percent-plus occupancy rate through the fourth quarter, which was exactly what we intended to have happen,” he continued.

However, raising the sustainable occupancy rate resulted in incrementally lower new lease rates. Camden’s new lease rates for the quarter were up 1.5 percent, while renewals were up 6.8 percent.

AvalonBay Communities’ took advantage of the strong occupancy platform built during Q2, pushing hard on renewals during the third quarter, when the greatest number of leases in the company’s bi-coastal portfolio expire, and achieving average renewal increases of 6.1 percent during the quarter, 100 basis points above the prior year period, resulting in a total positive rent change of 4.6 percent, about 70 basis point above last year.

Economic occupancy was 96.6 percent in Q2, which was a bit higher than the REIT’s execs consider desirable and they would have pushed rents a little bit harder a little bit earlier in the quarter if they’d seen that coming, they said.

“On a sequential basis, rent increases did move up by about 200 basis points, which was not necessarily too surprising, given how hard we were pushing on the gas in terms of renewals,” AvalonBay Executive VP of Investments and Asset Management Sean Breslin explained.

And, AvalonBay’s turnover increase of five percent, on a year-over-year basis, to 70 percent in Q3 also was a bit of a surprise. “We were expecting turnover to come up some. It probably came up a little more than we thought,” said Breslin.

“The one piece that we had not anticipated is that 500 basis point (year-over-year) increase in turnover. About 40 percent of that was what we call ‘unplanned move-outs’ or, in common terms, lease breaks,” he continued.

“You can sort of project what you think that’s going to be based on history, but that activity was more than we expected,” he said.

Generally move-outs are triggered by home purchases or job relocations, and there wasn’t much year-over-year change in those numbers, which usually are pretty steady. While it does vary by market, lease breaks generally are about 20 percent to 30 percent of AvalonBay’s total turnover activity. It just happened to spike during the third quarter, Breslin said.

“In terms of those lease breaks that I mentioned, that was a portfolio-wide quote, that of the 500-basis-point increase from 65 percent to 70 percent. Forty percent of that resulted from an increase in lease break activity that’s somewhat volatile and hard to focus. We have a baseline of what we think that’s going to be in terms of how we manage revenue, based on historical trends. It just happened to be up in the third quarter,” he said, adding that the company is looking closely at that anomaly, to figure out the cause.

“Some of the things that you hope it might be related to in terms of economic activity, job relocations and things like that, did move up a bit,” and, while the company has yet to correlate those reasons with the unexpectedly high move-out rate, Breslin suspects financial reasons were the catalyst.

The year-over-year change in turnover varied by region. In AvalonBay’s Pacific Northwest market, turnover was up about 14 percent. Northern and Southern California were up about seven percent and six percent, respectively. New England was up about three percent and the mid-Atlantic was flat from the same period last year.

And, although it is sometimes difficult to discern whether it was a rent increase or a job loss or other financial disruption that caused a renter to break a lease, there are a couple of markets where that category went up more than others and the increased turnover could be correlated to AvalonBay’s rent push.

“For example, in Seattle the percentage of our move-outs that related to rent increase went up and turnover went up most significantly in that market. So, we do believe there is a correlation there that we pushed pretty hard in Seattle, maybe a little bit harder than we should have at that point in the cycle,” said Breslin, adding that AvalonBay nevertheless saw positive rent change through the quarter in that market.

And, when they started to see a bit of softening in places like Redmond or Belltown, the company backed off those rental increases a bit more quickly than might have been the case in Los Angeles or the East Bay, where AvalonBay doesn’t back off early on rental increases because it’s easy to replace a departing resident with someone else who’s willing to pay more. In the case of the East Bay during Q3, move-in rent change actually exceeded renewal rent change.

With occupancy in the high 95 percent range in October, the company probably will give up a little bit of occupancy as a function of the revenue optimization push through the rest of the quarter, Breslin predicted.

Given typically slower demand patterns in Q4, it isn’t wise to give up too much on pricing late in the year because it wouldn’t result in as much increase in occupancy as it would earlier in the year, he said.

“So, in terms of overall strategy, if we’re in high 95 or 96 range for the quarter, that wouldn’t be surprising. We wouldn’t be trying to reduce rent significantly to get to 96.1 or 96.2, as an example. Typically, what you give up in rent, what you’re baked with for six to 12 months, wouldn’t compensate for a couple of months of an extra five or 10 basis points,” said Breslin.

Committed renewals for October were running around 5.25 percent above previous rents and, looking forward to November and December, offers were out in the mid-5’s, AvalonBay CEO Tim Naughton said.

UDR, Inc., began managing lease expirations about 18 months ago. After watching the demand patterns for a number of years, the company’s leaders realized that there was a definite seasonality in the apartment sector, where new leases in the second and third quarters tended to be around 300 basis points higher than they were in the first quarter.

“What we did last year is we worked to move more of our lease expirations from the fourth quarter into those higher-lease-rate quarters in the second and third. So, we effectively moved about 200 to 300 lease expirations into third quarter from fourth quarter. Assuming about half of those people renewed and half moved out, that accounted for about 150 more move-outs in the third quarter than we had last year,” said UDR Chief Operating Officer and Senior VP of Property Operations Jerry Davis during the company’s third quarter earnings call.

“I have 120 fewer move-outs in my same-store portfolio in October of this year than I had in October of last year, so, our strategy, being able to reprice the 150 units at more of a 4.5 percent increase, instead of the 1.4 percent or so, that I’m experiencing today in October, worked,” he said.

Single-family rentals continue to capture investor interest amid the pandemic

Single-family rentals continue to capture investor interest amid the pandemic

ABOUT US
Yield PRO is one of a kind. It's multihousing news and strategy for rental owners and operators seeking to increase their asset value through streamlined processes and best practices. ﻿YP is the only independently-owned, nationally-circulated, exclusively-multifamily magazine in existence today.
FOLLOW US
© 2020 YIELD PRO MAGAZINE
Do NOT follow this link or you will be banned from the site!
MORE STORIES
Apartment watch

January 21, 2021
The National Association of Home Builders (NAHB) released its Remodeling Market Index (RMI) for the fourth quarter of 2020, posting a reading of 79. The finding...