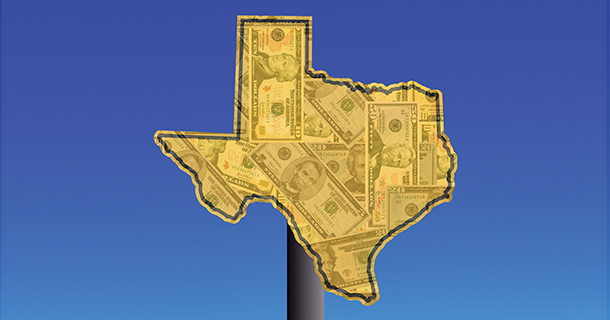 While many parts of the country have not fully emerged from the housing crisis and recession, Texas continues on a tear with new building and thriving residential and commercial real estate markets.

Construction crews are finishing office towers, industrial buildings, rental apartments and single-family homes and breaking ground on others to meet demand from expanding businesses and the growing number of people who work for them and need homes.

“Apartment construction has been happening throughout the Great Recession because of the continuous increase in population and employment levels,” said Mark Dotzour, chief economist of the Real Estate Center at Texas A&M University.

What’s different from other parts of the U.S.? A solid economy. The building- and business-friendly state sat out most of the housing bubble, which helped it through the recession. And it doesn’t hurt that Texas is a capital of the booming energy industry.

“Virtually all sectors of the economy are expanding in Texas this year,” said Dotzour, ticking off oil and gas, leisure and hospitality, and business and professional services.

The state added 24,200 construction jobs over the past 12 months through August, the latest detailed data available. That’s 14 percent of the 168,000 added nationally, according to Bureau of Labor Statistics data. Texas boasts 611,300 construction jobs despite an August dip. Economists and property developers say the construction boom throughout the state, whether office, housing or industrial, is being fueled by one main driver: jobs.

“The big picture in Texas that sets it apart is the incredible job growth,” said Adam Saphier, president of central Texas operations for Trammell Crow, the national development firm and subsidiary of CBRE.

Texas employment leveled off during the summer. But payrolls are still 932,600 jobs higher than in January 2008, when national payrolls peaked. The rest of the U.S. is still down 2.85 million.

Job growth in Houston, Dallas and Austin is twice that of the national average, Saphier said. Houston alone added 13,000 jobs in the last year. The state’s 6.4 percent jobless rate is almost a full percentage point below the national rate, even with heavy migration from other states.

“Houston will continue to be the global leader in the energy industry. It’s a clustering effect not unlike what you see in Silicon Valley with technology,” said Jeffrey Carter, chief investment officer with Franklin Street Properties, an office REIT.

Several oil companies are expanding to new office buildings, among them ConocoPhillips, Chevron and Noble Energy.

Exxon Mobil has a massive construction project under way on a campus that will sprout 20 buildings, able to accommodate 10,000 employees.

Houston’s office development is “still not excessive” when measured against demand, said Carter.

Dallas may not be growing as strongly as Houston, but it’s more diverse. Fortune 500 companies dot the centrally located business and logistics hub.

Since 2011, Trammell Crow has built office buildings in Dallas for Yum Brands’ Pizza Hut and MedAssets, a health care tech firm. It’s just completed one for Swedish telecom equipment maker Ericsson. It’s about to break ground in Fort Worth on a regional office for the Federal Aviation Administration.

“All of those were build-to-suit and none was energy,” Saphier said. And Austin has become a thriving technology hub.

Texas has long been a business-friendly state, which has made it a magnet for companies wanting to relocate from more stressful states, such as California.

Texas has no corporate tax or personal income tax. State and local incentives have drawn new businesses, not just in energy.

Texas also makes it easy for builders to build.

“Entitlement and permitting is a cake walk compared to many parts of the country,” said Jed Reagan of Green Street Advisors.

That can be good if you’re a developer first in on a new cycle, he said.

The perky housing market in Texas is contributing to the Lone Star State’s growing economy. Three of the top-10 U.S. metro markets with the highest number of annual housing starts are in Texas, according to a recent Metrostudy report. Houston and Dallas/Fort Worth are at the top of the list, while Austin places ninth.

Unlike other land-constrained Sunbelt states such as Florida, Texas still has lots of land for development. That’s one reason home prices didn’t rise as much during the housing boom. And so they didn’t fall as much, either.

Meanwhile, 23,500 rental units are under construction in the Dallas area, near a record high. Occupancy levels are at 94.4 percent, a 12-year best, MPF Research said.

Texas has added nearly 4.3 million residents over the past decade, putting its population at more than 26 million, CBRE noted in a recent report.

“Houston and Dallas/Fort Worth weighed in with more people added than any of the nation’s other 365 metro areas with expansions of 1.23 million and 1.21 million, respectively,” the report noted.

More people are coming. Texas is expected to attract more than 2 million new residents by 2018.