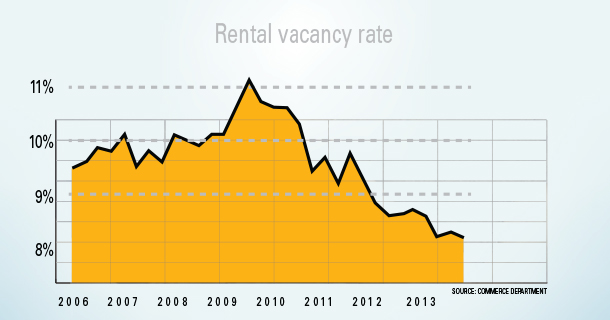 The rental vacancy rate, or the share of units that are empty and available for rent, fell 0.5 percentage point in 2013 to 8.2 percent in the fourth quarter from a year earlier, the Commerce Department in January.

After peaking at just above 11 percent in 2009, rental vacancy has fallen sharply in the wake of the housing collapse and recession. That reflects families flocking to rentals after losing their homes to foreclosure, being blocked from obtaining a mortgage due to tighter lending standards or simply concluding that buying is too risky.

The higher demand and tighter supply of units are enabling landlords to raise prices. The median asking rent for vacant units in October through December was $746, up 3 percent from $724 a year earlier. (The figures aren’t adjusted for inflation.)

The trend in higher apartment demand could conceivably reverse. Builders have ramped up construction of multifamily units, many of them rentals, in a development that should ease the crunch. Also, as rents rise more families might conclude eventually that buying makes more sense economically.

As the rental-vacancy rate fell last year, the stock of homes for sale rose. The homeowner vacancy rate, reflecting the share of housing inventory that is vacant and for sale, stood at 2.1 percent in the fourth quarter, up 0.2 percentage points from both the third quarter and a year earlier. Stronger economic growth and higher home prices might be leading more homeowners to finally put their homes on the market and move up, slightly increasing inventory.