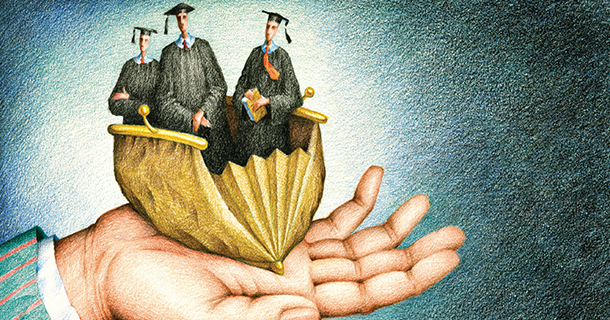 A perfect storm of rising tuition costs, and youth unemployment and underemployment, has meant many millennials are saddled with unwieldy student loans that they’re struggling to pay back.

That’s left countless in Generation Y with no option but to live at home. For those who are lucky enough to live on their own, many are living paycheck to paycheck and struggling to make payments on their debt. As a result, some are putting off things like getting married, saving for retirement and having children. The situation is so bad that it’s tantamount to an entire generation being sentenced to debt.

In the past few years, debt levels have skyrocketed to an average of $33,000-per-student. And nearly 70 percent of students are now taking on student loans, which is up from less than half of students in 1994, according to Edvisors.

With education inflation increasing and companies demanding more education for the same positions, millennials may feel forced to get at least a bachelor’s degree and possibly even a graduate degree in order to have a chance at a good job. But graduate school often just means graduate student loans, and 15 percent of students who get more than one degree leave school with six-figure debts.

Growing debt has meant that student loans now represent the second highest form of consumer debt after mortgages, exceeding even credit card debt. While strategies like consolidating or refinancing student loans help, they may only serve to relieve some of the pressure. In the case of private student loans with a variable interest rate, for example, refinancing may only bring temporary relief to the borrower if interest rates rebound

But that’s only part of the problem. According to the U.S. Department of Labor, about 750,000 of bachelor’s degree-holders, or 26.8 percent of graduates under the age of 25, are underemployed. Some economists believe that millennials will never be able to make up for the years of unemployment and underemployment that they’re experiencing.

Entering the workforce during bad economic times has long-term effects, according to researchers at the Georgetown University Center of Education and the Workforce. These effects lead to workers settling for jobs they otherwise wouldn’t have taken, which leads to reduced earning potential and less job security even 10 to 15 years later.

One problem that millennials lucky enough to have jobs face: while average student loan debt has increased between 2005 and 2012 by 35 percent, the inflation-adjusted median salary has dropped by 2.2 percent.

All of this potentially explains why more millennials are living at home. Pew Research found that 53 percent of 18- to 24-year-olds, 41 percent of 25- to 29-year-olds, and 17 percent of 30- to 34-year-olds live at home with their parents.

Effects on the economy

This isn’t just a problem for millennials. With student debt currently at $1.2 trillion, there are consequences on economic growth. Large loans coupled with lower incomes mean that millennials aren’t buying big-ticket items like homes and cars, and that is having an impact on the economy.

The New York Fed recently looked at whether student debt was affecting millennials’ ability to buy houses and found unsurprisingly that a smaller number of 30-year-olds have mortgages today than any time in the past decade. Also, 30-year-olds with student loans were less likely to have a mortgage. To make matters worse, a study by Richard Fry at Pew Research Center showed that those struggling with student loans had a greater likelihood of having other debt like credit cards and auto loans, thus making it even harder to buy a house.

With so many millennials living at home, household formation has reached a 40-year low. Household formation helps fuel economic growth because of the goods and services that are bought to set up a new household. In addition, more people renting tends to make the rental market more competitive and fuel new construction.

It’s not just causing them stress, however, it’s also affecting their relationships, with half arguing with family, friends or partners about debt, and 51 percent having to borrow money from friends or family to service their household debt.

Given their dismal debt situation, it’s not surprising that many feel like they’ve been sentenced to debt. Millennials with student debt followed the path that their parents and teachers assured them would lead to success. They went to school. They studied hard. No one knew that they would end up graduating during an economic recession or its tepid, drawn-out recovery. The unprecedented financial hardships that millennials have experienced have many predicting that Generation Y will be the first generation in recent memory to be worse off financially than their parents. This is already starting to have an impact on millennials, seeing as an Urban Institute study found a 30-year-old in 2013 is worth 21 percent less than a 30-year-old in 1983.

Despite all these factors, some still blame millennials for their hardships. Either they’re lazy, or they’re entitled. Either they took the wrong degrees, or they are unemployable. The truth is that millennials are the most well-educated generation, and different career or life choices wouldn’t have helped since they graduated at a time when there just weren’t enough entry-level jobs to go around.

What is particularly admirable is that all these struggles haven’t caused them to give up. While they might currently feel like they’re sentenced to debt, according to a 2010 study by Pew Research, 88 percent believe that they will do better in the future.

The Millennial debt sentence will likely continue to cause ripple effects on the economy, on the housing market, and possibly even on birth rates. However, these should begin to change when the economy improves. If unemployed Millennials are able to get jobs and employed Millennials are able get better paying jobs, they will be able to manage and pay down their debt, move out of their parents’ basements and start planning for their futures.

Author: Amanda Reaume is a freelance writer and the creator of Millennial Personal Finance.