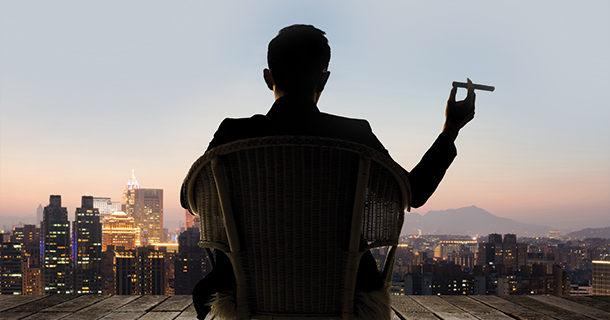 He took his habit to the streets, or rather to the front steps (still part of the property), wedging the door open if he happened to go for a stroll, not only adding toxic fumes to the air but creating a security risk. When spring arrived, the melting snow revealed, along with crocuses and dog poop, his scattered butts.

Other tenants asked me to join them in complaining to the landlord. Reluctantly, I agreed. Despite the smoke that would waft into my third-floor window, despite the truculent presence of Smoking Man himself, puffing away in his stocking feet by the wedged-open front door, I could not in good conscience condemn him.

Because I, too, have been Smoking Man. Only worse.

For years, I was a smoker and didn’t think much about its effect on my health, let alone others’. I had a connection at a tobacco store and got my hands on the good stuff. Pricey cigars, lush pipe tobacco, exotic cigarettes. One night, I shared a can of Nat Sherman Sobranie cigarettes with a couple of people at a friend’s apartment. That’s about 200 cigarettes. No neighbors complained, though one of us got the hiccups.

When that source of quality tobacco dried up (the guy was fired), I fell back on Camels and Luckies. Then my blood pressured climbed, and I “quit.”

I smoked cigars. Expensive cigars. Three or more a day. Once I was coming home and I smelled a cigar. I thought, wow, somebody’s smoking something nice. Then I realized it was the scent from the Montecristo Rothschild I’d finished only hours before.

Did that make me quit? Hell no. No one complained. It was the cost. Ten bucks a pop. I was almost spending as much money on tobacco as rent.

Since then, I, like the rest of the world, have become more aware of the effects of secondhand smoke. Not just because of the 2006 surgeon general’s report confirming that it was harmful but because my partner is extremely sensitive to it. She coughs and sneezes, and it makes her miserable.

And in the meantime, smoking has been banned from restaurants, bars, some parks, in public housing developments, and in many private residential buildings, both rentals and condos. An initiative to ban smoking in all multiunit dwellings died in committee in the Massachusetts State Legislature in the 2013-2014 session. Representative Paul R. Heroux, Democrat of Attleboro, filed a new measure, to “prohibit smoking in residential apartments,” in January on behalf of a constituent. It has been referred to the Committee on Housing.

Given such restrictions, would I have been reduced to furtive smoking in alleys or puffing with the windows open and a towel over my head? Would I quit? Or would I, like the members of the Cambridge Citizens for Smokers’ Rights, have said enough is enough and resisted?

Big Tobacco does not fund Cambridge Citizens for Smokers’ Rights. It consists of six active members, but about 30 people attend public hearings with the group and 600 are on the e-mail list. Stephen Helfer, a 67-year-old retired Harvard assistant librarian and cofounder of the group, and 36-year-old Emily Wieja, a member from Charlestown (you don’t have to be from Cambridge to join) are sitting around the kitchen table in Helfer’s Cambridge condo pondering the future of that “last refuge” of the smoker—the home.

“It’s a very well-thought-out plan,” Wieja says. “Ten years ago, the most obvious was the bar-smoking ban. They claimed they weren’t going any further. But it’s creeped up. Now there are bans in parks, bans on beaches, bans in outdoor restaurant seating. The next logical step is apartments.”

“If you go to the CDC (Centers for Disease Control and Prevention) website, they have something called a ‘Healthy Homes’ program that promotes banning smoking in private buildings,” Helfer says. “And they’ve run ads with someone like me sitting around smoking, and you see the smoke going through the wall and enveloping a small child or elderly person. They mean business.”

And who are “they”? Helfer points to the head of the CDC, Dr. Thomas Frieden, as one of the most zealous of those who want to make smokers’ lives miserable.

As for their motives, Wieja acknowledges that most of those who oppose smoking do so for idealistic reasons, or at least initially.

“I don’t want to sound like a conspiracy theorist,” she says, “but I think it started as a grass-roots movement in the ‘60s or ‘70s, but now there are a lot of people who make money off of it. They do it as a career. Not that their goal is entirely monetary. There are lot of motives. Some people just have a real hatred of tobacco and smoking.”

“And smokers,” Helfer adds. He sees the anti-tobacco campaign as an effort to ostracize smokers. “I’m not a psychiatrist, but I think there is some deep-seated psychological reason why people hate tobacco and smokers.”

He shows me an 1884 editorial from The New York Times that denounces smoking and warns that “if this pernicious practice obtains among adult Americans the ruin of the republic is close at hand.”

CCSR, though, believes that tobacco has salubrious effects, that it increases concentration and reaction time and relieves anxiety. They also believe that the dangers are exaggerated, especially those of secondhand smoke.

Nonetheless, they say they are considerate of others who do not share their beliefs. Helfer has lived in his Cambridge condo for 20 years, and only one neighbor has complained. Helfer then took steps to contain the smoke. The neighbor has not complained since.

“The last thing I want to do is annoy someone,” Helfer says. “I couldn’t enjoy smoking if I knew I was doing that. Our opponents may be flawed, deceptive, and even unscrupulous, but that does not make them monsters or us saints.”

Helfer and other members of CCSR try not to bother others with their smoking, but not everyone is as considerate.

A few years ago, Alyssa Scott bought a Boston condominium and soon discovered secondhand smoke seeping into her unit. “You’d turn on the faucet and smoke would come out,” she recalls over the phone. “It would come from under the walls. People would ask if I had been smoking, but it was the apartment.” She tried to settle the situation amicably but ultimately ended up having to engage in long and expensive litigation. “Unfortunately, we did not prevail,” says Scott, who has since moved. “I think we were ahead of our time.”

“It’s a tough issue,” she says. “On the one hand, your home is your castle, and you should be able to do what you want in it. However, it seems crazy that there are restrictions against noise yet no protections against secondhand smoke, a known health risk.” Despite the cost and headache and her distaste for confrontation, she thinks the effort was worthwhile.

“It was an important case and brought the issue to light,” she says. “It was in the public eye, which wasn’t what I initially sought out to do, but it helped spark a conversation.”

Chris Banthin is a lawyer working with Northeastern University’s Public Health Advocacy Institute. In a 2013 interview with WBUR, Helfer, the smokers’ rights group cofounder, describes the institute’s Tobacco Control Resource Center as “public health absolutists who feel that if we all do what they tell us to do, we’re going to have some kind of utopian state.”

Banthin, however, describes it as “an organization that seeks to use the law to improve public health.”

When it comes to regulating smoking in privately-owned properties, Banthin sees no pressing need for legislation. “A lot of landlords are going smoke-free voluntarily,” he says. “Condos also. It’s a selling point.”

But aren’t they trespassing on the right to do what you want in your own home? Aren’t the restrictions more moralistic than a valid response to any health threat?

“As for secondhand smoke, the science is 100 percent irrefutable and widely accepted.”

Banthin sympathizes with those affected by bans. He advises landlords and other stakeholders on how to implement a no-smoking rule. Part of that includes engaging residents in the process.

“I have gone to hundreds of housing authority meetings,” he says. “I’m the first one that tells them. Most of them are upset, but most say, ‘OK, I recognize it’s important, so I’ll go outside.’ I think everybody gets it.”

I don’t think Smoking Man would get it. Good thing I quit. Pretty soon you will have to walk a mile for a Camel.