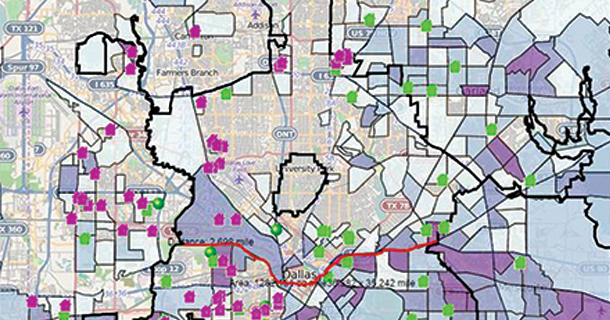 The Obama administration wants to move America off the dime by demanding greater accountability among urban governments that use federal housing subsidies. If these programs really work, prove it with audit results, the administration says. If they can’t prove effectiveness, then urban housing managers must present better plans—or risk penalties.

These programs are at the core of Dallas’ divide between a poor, minority-dominated south and wealthier, white-dominated north. Well-meaning people believed for years that the solution was to pump millions of dollars into federally subsidized housing projects to improve the neighborhoods where poor minorities lived.

Instead, these policies anchored poor people in place, segregating them in high-crime areas where schools were bad and jobs scarce. Even worse, the structure of federal tax-credit subsidies encouraged developers to abandon all but minimal maintenance once they had recouped their construction investments.

Once-shiny projects degraded steadily. Reconstruction sought to replace old with new. The process was repeated all around southern Dallas. Sometimes tax-credit restrictions established terms of 20, 30, even 40 years on the duration for a single piece of property, ensuring it would forever be dedicated to subsidized housing.

That’s how slum-based segregation persisted, no matter how many millions were reinvested in new projects. Although a recent Urban Institute study gave Dallas the highest inequality ranking in the nation, we’re hardly alone. Baltimore, Chicago, New York and St. Louis also have these problems, which are contributing mightily to increased racial tensions.

People are fed up, and the Obama administration is right to demand a course change. This comes on the heels of a Supreme Court ruling supporting the Dallas-based Inclusive Communities Project in its challenge of the allocation methods Texas uses to assign funding for federal housing subsidies.

Since Dallas increasingly serves as the focal point of national attention, let Dallas lead the way toward a better solution.

State and local officials must be vigorous in enforcing anti-discrimination laws so that apartment owners in more affluent areas, including the suburbs, cannot turn voucher holders away.

The Obama administration’s plan emphasizes local fixes to local problems. That’s the best approach to avoid mandated, heavy-handed federal solutions—like the ones that helped create this problem to begin with.

“A ZIP code should never prevent any person from reaching their aspirations… We’re approaching this in a very collaborative spirit. Enforcement is always a last resort —it is there, it is possible, but our preference is to work cooperatively and steadfastly with communities.”