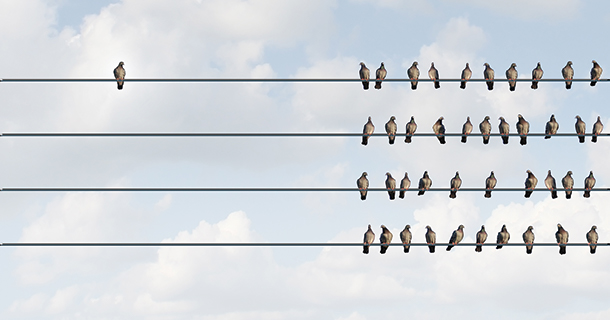 Research shows it’s terrible for our health; it diminishes cognitive performance and the immune system, increases the risk of heart disease and dementia and hastens early death. And the psychological effects are just as bad; studies show that people need strong social connections to feel happy and find meaning in their lives, and that many of us would actually rather receive mild electroshocks than be alone.

One might think that technological connectivity has or will soon save us from the blight of loneliness. But it seems that we feel more isolated today than ever. According to a report in The Atlantic, one in four Americans reports having no one with whom they can discuss important matters, compared with one in ten 30 years ago, and a 2013 survey conducted by Lifeboat found that the average American had only one real friend. The Guardian newspaper says we may have entered the “age of loneliness.”

Why? Because there’s a difference between being surrounded by or linked to other people and having moments of genuine human connection with them. As the writer Richard Bach observed, “The opposite of loneliness is not togetherness, it’s intimacy.”

What can be done about it? Since most of us spend the majority of our time at work, let’s start the fight against loneliness there. Companies and leaders who want productive, happy employees should make it their job to foster more intimacy at the office. Of course there’s no way for a manager to manufacture deep, meaningful friendships with or among employees. But it is possible to encourage more moments of connection between co-workers:

Walk your talk. In Nilofer Merchant’s TED Talk “Got a meeting? Take a walk,” she notes: “Nowadays, people are sitting 9.3 hours a day. Sitting has become the smoking of our generation.” Her solution to this health crisis is walking meetings. When you get out of the office and get some exercise with colleagues, you’ll immediately feel closer to them, particularly if the walk is one-on-one. You’ll also be more productive and innovative together. Neuroscientist John Medina, the author of Brain Rules says that 1.8 miles per hour is the most productive meeting pace, while a recent Stanford study indicated that people were 60 percent more creative while walking. At design firm NBBJ, instead of sit-down meetings with traditional agendas, they now have “meeting walks” complete with “itineraries.”

Play roulette. The idea of lunch roulette isn’t new but it remains a useful way to gain perspective by leaving one’s comfort zone, if only for a quick meal. After you’ve broken bread with a co-worker, it’s hard not to say hello in the hallway, and eventually the new relationship might turn into a fruitful collaboration.

Companies may choose to match up employees randomly, or encourage people to seek out their own lunch dates. And there are apps to help: Spark Collaboration, a start-up in New York born out of the Randomized Coffee Trails (RCT) in the U.K., just won the inaugural North American Employee Engagement Award for its platform that “brings people together by connecting them with people they would not normally meet.”

Instigate surprises. Surprises create the most authentic, intimate emotions because they catch us off guard. Companies such as Surprise Industries—founded on the idea that “life is richest when we shake up routine and embrace surprise”—offer tips, experiments, and even a “Surprise Academy” that teaches participants how to introduce more surprise into their lives. And the practice is gaining traction in the business world: Etsy, for example, runs a “Ministry of Unusual Business,” a secret society of employees tasked with injecting delightful surprises into everyday work.

Seek “thick presence.” Priya Parker, founder of Thrive Labs, and her author husband, the writer Anand Ghiridharadas, have a tradition they call “I Am Here” days. They invite about a dozen friends to put their smartphones away and spend a day exploring a part of New York City with them. The idea is to allow people to be “thickly present” rather than thinly distributed. Imagine applying this concept at work —instead of committing to a one-hour meeting to move forward on a project or provide an update, why not spend a full unscheduled day with colleagues working on that and anything else that comes up?

Host a dinner for 15. I co-founded a series of dinners called 15 Toasts with Parker and the World Economic Forum’s Council on Values. These occasional gatherings, often held on the eve of Forum summits, bring together 15 global business leaders in intimate settings to discuss important issues. Each guest must provide one toast to the night’s theme (for example, “15 Toasts to Happiness” or “15 Toasts to Escapes”) over the course of the evening, and, as a special twist, the one who contributes last must perform his or her toast in song. “It’s the first dinner I’ve ever been to where I went in not knowing anyone and came out feeling connected with every single person,” the CEO of a Fortune 500 company told us after one such dinner. At the next day’s conference, he even hugged everyone he had met the night before.

People crave connection and intimacy in all realms of their lives, including at work. It’s a critical source of empathy and tolerance—the glue that keeps relationships, projects, and organizations together. Leaders should do more to encourage it.

Author: Tim Leberecht is the author of The Business Romantic: Give Everything, Quantify Nothing, and Create Something Greater Than Yourself and CMO of NBBJ. He also serves on the Values Council of the World Economic Forum.