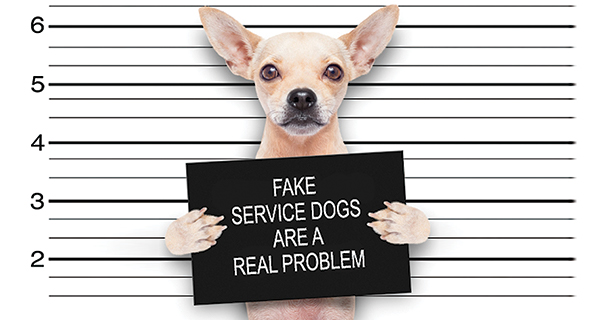 The bill aims to better define and differentiate between individually trained service animals, such as guide dogs for the visually impaired, and assistance animals that can perform tasks as well as provide emotional support to help with a person’s disability. While federal law requires public buildings or businesses to make “reasonable modifications” to accommodate service animals, there is no such requirement in state or federal law for assistance animals.

The measure, L.D. 1601, would make it a civil offense to “knowingly misrepresent” an animal as a service or assistance animal, punishable by up to a $1,000 fine.

“It is a serious issue for service dog people who have legitimate, well-behaved service dogs and for people who use assistance animals appropriately in a housing situation,” Pauline Lamontagne, president of Pine Tree Guide Dog Users, said.

Lamontagne was among the members of an 11-person task force created by the Legislature last year to examine state policies and practices regarding animals that help individuals with disabilities. Several other states also are eyeing policy changes in response to growing concerns.

In its report to the Legislature, the task force stated that there “does not seem to be consistent, reliable data on the use of such animals,” but members agreed that the number of individuals with service animals and assistance animals in Maine was increasing. But so are concerns.

“There are increasing complaints about misuse and misrepresentation of animals as service animals or assistance animals,” reads the report. “This is consistently reported by Task Force members and their colleagues and in news and social media.”

Daniel Bernier, counsel for Central Maine Apartment Owners Association, told committee members that he’s heard several recent cases where apartment residents tried to claim their dogs were service dogs only after the animal bit another person. In another instance, a tenant claimed a boa constrictor as a service animal.

Bernier said the bill would help clarify the definitions of service versus assistance animals while perhaps helping deter fraudulent claims.

“This problem is exploding right now,” said Bernier, who also served on the task force. “I think some of you have seen it in the media. But I also think, between what is going on in Maine and what is going on in other states, we are moving in the right direction.”

The Maine Human Rights Commission, which investigates and occasionally litigates human rights cases, receives daily questions about service and assistance animals, said Barbara Archer Hirsch, the commission’s attorney. The number of discrimination complaints also is rising, from just seven complaints in 2012 to 37 in 2015.

While 37 sounds like a relatively small number, Hirsch said, the commission received more complaints about service or assistance animals last year than about potential discrimination based on sexual orientation, religion or pay inequality because of gender.

“Because the commission believes that using appropriate terms will help in its work of communicating and enforcing the (Maine Human Rights Act’s) provisions related to the use of service and assistance animals by individuals with disabilities, the commission supports the proposed changes to the act,” Hirsch said in her written testimony.

Federal law currently prohibits states from requiring certification of service or assistance animals. Several speakers and committee members discussed the proliferation of websites that will sell false certificates to individuals. There appeared to be agreement in the room that Maine’s law could be used to target or at least threaten legal action against such operations.

If anything, she added, service and assistance animals are likely underutilized in society given how many people have disabilities.

“The effort to prevent the fraudulent use of service and assistance animals will be better served by targeting the problematic companies who profit off the intentional confusion they and their products cause by misleading individuals into believing that they will be entitled to the rights and privileges afforded to those with disabilities if they purchase the company’s products,” Hansberry told committee members.