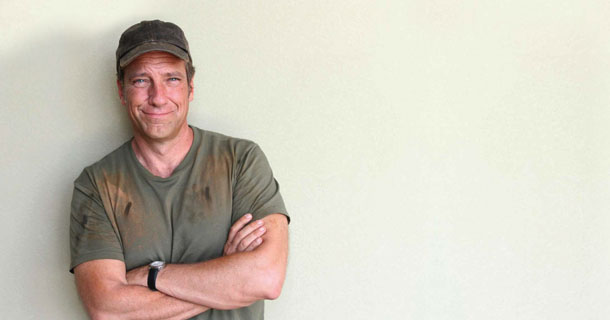 Several days earlier, the writer, narrator, producer, actor and former host of the popular television show Dirty Jobs delivered the same message to a House Committee on Education and the Workforce subcommittee on Capital Hill, as Congress prepares to consider new legislation that would reauthorize more than $1 billion in federal funding for career and technical training in the skilled trades.

Since 2010, Rowe has testified three times before congressional committees on the skills gap that has helped to create a US labor market plagued with a severe shortage of skilled workers.

Rowe blames this skills gap on a narrative that has been adopted by much of the United States, from parents to school guidance counselors, who have steered kids away from a whole category of perfectly legitimate occupations.

This narrative, he said, is best illustrated by a 1970 advertising campaign, dubbed “Work Smart NOT Hard,” that features above that credo an image of a young man in graduation cap and gown holding a degree next to an image of a man in grease-covered mechanic’s overalls wielding a wrench.

“The country took that advice and, under the wrong belief that hard work can be separated from success, has been funding it with the push toward a four-year degree, while every other form of education is considered ‘alternative,’” said Rowe.

The lack of vocational education classes at most schools also has served to shift our culture away from blue-collar work.

Instead, students are encouraged to borrow money to pay for four-year degrees in fields where they would compete for a limited number of jobs, he said.

“If we are lending money we don’t have to kids who will never be able to pay it back for jobs that aren’t available, I would say we have gone around the bend a bit. Meanwhile, there are five million jobs that pay decent money that remain unfilled,” said Rowe.

Of those, 200,000 are in the construction trades, an increase of 81 percent over the past two years, according to construction trade associations. These unfilled jobs directly affect single-family and multifamily homebuilders at a time when construction in both industries is booming.

“The industry lost 1.5 million workers during the recession and we’ve only brought back 700,000. The median age of the construction worker is now around 40 years of age and we do not know where the next generation is coming from,” said Robert Dietz, chief economist and senior vice president for economics and housing policy at the National Association of Home Builders (NAHB).

As this limited pool of skilled tradesmen ages, there are few laborers ready or willing to take on those jobs and as these older workers retire, the pool of skilled workers will shrink even more.

Worker shortages became a serious issue in 2012, when 21 percent of builders reported some type of shortage to NAHB. That number grew to 56 percent in 2016.

“A shortage of qualified labor remains one of our industry’s top challenges, in both the multifamily and single-family sectors,” said NAHB Chairman Granger MacDonald, a homebuilder and developer from Kerrville, Texas.

“According to our recent surveys, it tops the list for our members with 78 percent claiming that it continues to be a significant issue. We face an aging workforce and a still recovering housing sector that, while growing, is being hindered by a lack of labor to meet the current demand,” said MacDonald.

Another issue affecting the single- and multi-housing industries is the number of foreign-born workers that make up the construction workforce. Nearly 30 percent of those employed in the construction trades are foreign born, according to 2015 NAHB research. Dietz notes that the number is even greater among occupations like roofers and drywall installers.

But, during the recession, many of these workers returned to Mexico and did not return. Today, the more restrictive immigration policies of the Trump administration are worrisome to members of the growing homebuilding industry who fear that reducing legal immigration and deporting unauthorized immigrants working without documentation will only worsen the situation. Low-skilled immigrants, with 12 years of education or less, account for 20 percent of today’s construction workers, according to a recent National Bureau of Economic Research paper.

Retired homebuilder Don Rodgers says that times have changed since he was an active builder. “I was a carpenter in the 1960s and you didn’t see a Hispanic guy on the job in those days. You didn’t see them anywhere. The number of immigrants has increased over the years and now you go on a construction site and maybe 75 percent of the guys don’t speak English,” said Rodgers, who is a consultant to the homebuilding industry today.

“American youths don’t want to work in the field and don’t want to work in construction. They want to do computer work or something that won’t make them sweat. But foreign-born workers are more than willing to take on those jobs. They live together in a building somewhere and send the money home to their families. They are hard workers,” he said, adding that what is needed are work Visa programs that make sense.

The Skilled Labor Fund, supported by NAHB and other national builder groups, was launched in January seeking $5 million from companies affected by the lack of skilled construction labor to fund trade school scholarships.

The National Housing Endowment, a 501(c)(3), will oversee the fund, created to address the dearth of high-quality, skilled labor entering residential construction employment pools. With a stated mission of “Building a Stronger Future,” the fund is calling on industry partners, including builders and remodelers, dealers and associations, select government agencies and building product manufacturers to contribute.

The fund’s operating committee consists of senior management from the various trade organizations involved, which will recommend recipients of scholarship awards. The funds awarded will then be dispersed to accredited schools within the communities where the monies were raised, assuring that donors and their markets become direct recipients of the donations.

These trade organizations are struggling to find solutions to a problem that is indicative of a much broader gap in training that has affected many sectors in the nation.

Meanwhile, Rowe says that working 300 dirty jobs during the TV show of the same name taught him about success. He dedicated the show to his grandfather, who, with no more than an eighth grade education, could build a house without blueprints. Rowe says he did not inherit that gene, but has great respect for the trades.

“If tradesmen stopped going to work, they would effectively bring the economy to its knees,” he said.

“I know that sounds a little ‘high school,’ but that’s where the action is. There is a lot we can’t control, but it is entirely within our control to decide what the definition of a good job is. So if we disparage and malign an entire category of perfectly reasonable opportunities, then it’s not the out-of-work worker who is going to pay the ultimate price, it’s people like you and me who are addicted to smooth roads, affordable energy, plumbing and all that stuff,” said Rowe.

He believes that, “If you don’t have an underlying appreciation for the work, if you are not talking about jobs that people affirmatively aspire to, you are pushing a boulder up a hill—it’s a sucker bet.”

Rowe also attributes some of his biggest life lessons to those learned while working with the tradespeople on Dirty Jobs.

In February 2008, he visited Rodger’s worksite in Orinda, Calif., to film one of the show’s episodes. The 1,600-acre site was under mass grading for a future residential single-family development called the Wilder Project.

“I received a call from the erosion control company, which asked if we would allow Rowe to work with us for his TV show. Mike was going to be spraying straw wattles into trenches in the hillside to prevent silt from going down the hill,” said Rodgers.

Wattles are permeable barriers made of straw or hay that are used to detain surface runoff long enough to reduce flow velocity.

“Spraying them is very dirty and hard work. Hay sticks to your face and you get covered as you shoot it out of a big cannon onto the side of the hills,” said Rodgers.

“Mike and I walked up the hill to see where we were going to be doing the activity and we saw that his camera crew was about 250 yards across the way on a muddy levy road.

“They were in a regular van without four-wheel drive and I asked what they were doing, because it looked like they would get stuck in the mud. Mike said he thought they were trying to find a place to shoot from. Sure enough, they got stuck in the mud and I suggested that Mike drive one the big tractors that was onsite to haul them out.

“‘You’d let me do that?’ he asked, and I told him, ‘Sure, I’ve seen you operate equipment on your show.’

“So on his way up the slope to the tractor, he slipped on the muddy ground and fell right on his face. I’m off to the side, and the camera crew doesn’t even reach down to help. Instead, they are getting the shot right in Mike’s mud-covered face.

So I also took a picture of him.

“Mike got up laughing, but I know it wasn’t a good fall.

“He is a very good all around guy, not standoffish at all. He could have been part of the work crew and you wouldn’t know he was the star of the show. He’d make a good president,” said Rodgers, adding that Rowe went on to pull the van out of the mud and successfully spray the straw wattle.

Building for the future

Today, Rowe runs the mikeroweWORKS Foundation, which awards scholarships to students pursuing a career in the skilled trades. This year, he is busy traveling to cities around the country to help induct young Americans into these unfilled positions through training and apprenticeship programs.

On-the-job apprenticeship programs in the skilled trades declined 40 percent between 2003 and 2013, according to the Labor Department, but thanks to the efforts of organizations like Rowe’s and industry associations like NAHB and others, they are making a comeback.

“Our leaders are debating the wisdom of apprenticeship programs. The business of learning a useful skill goes far beyond workforce development. It goes right to the guts of who we are as a country. A robust apprenticeship program is a statement of what we value as a society. So, too, is the absence of one. It’s easy to forget that the dignity of work has little to do with the actual job and everything to do with the skills needed to perform it. We simply have to get back to teaching those skills and there’s no better way to do that than through an apprenticeship program,” said Rowe.

He acknowledges that a large number of companies are eager to support his endeavor. His organization is partnering with SkillsUSA, Future Farmers of America and Boy Scouts of America to provide scholarships for jobs that are in demand.

“I’ve heard from lots of other organizations and like-minded programs that wish to partner. The gang at the TV show, This Old House is helping lead the charge. They’ve been incredible, and their recent contribution to the next Work Ethic Scholarship Program is going to change the game, and hopefully, inspire others to follow suit,” he said.

This Old House is currently casting for upcoming shows. The nationwide casting call launched on February 6.

Rowe said, “With respect, this is what The Apprentice should have always been.”

Blackstone moves out of rental-homes

Blackstone moves out of rental-homes