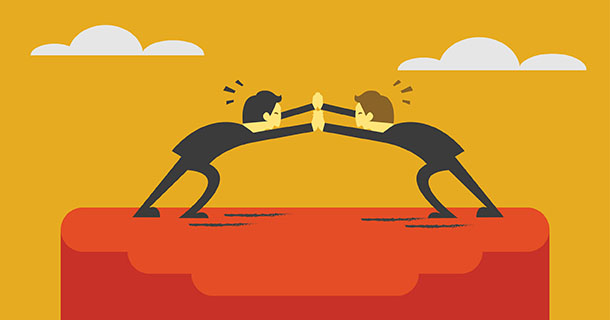 The nasty looks and belittling comments reached a point at law firm Bryan Cave, in Irvine, Calif., that the partners held a civility workshop.

Managing partner Stuart Price says working together toward a common goal set the right tone for the workshop, as the employees set up a code of civil behavior. The firm has the 10 points of the code displayed on a granite block in the lobby.

“I think two items in the code really stand out for me,” Price said. “Number 3 is we treat each other equally and with respect, even if the conditions are very difficult. Then the last item in our code is we address incivility. If you don’t address incivility, then the plaque just becomes a piece of granite, but it doesn’t have life.”

He says they no longer let uncivil behavior slide.

“The first step for us along the way is to address it with the person, privately, just talk about what happened,” he said. “If the pattern continues with that specific person, we will have further conversations and if it’s particularly problematic, we might terminate them.”

Creating a civil work environment has impacted the firm in many positive ways.

Measuring the cost of incivility

A culture of civility helps employees feel safer, happier and better, said Georgetown University management professor Christine Porath. She incorporated results of her research and personal experiences in a new book, Mastering Civility: A Manifesto for the Workplace.

She witnessed the consequences of incivility years before she started studying it.

“I thought I scored my dream job after my graduating from college,” she said. “I got to work at one of the largest sports marketing organization in the world. When I took the full-time job, I learned that it was a very toxic culture. The top leaders had a bad behavior, narcissism. And they had a tendency to belittle and demean people in front of others.”

Then it became clear to her the negative effect incivility had on people.

“It was contagious, too,” she said. “It affected their performance and motivation and mood throughout the day, but they took that into their relationships with others; clients and customers. I just saw that it was hurting the organization. And it was also hurting employees, not only their work life, but they were taking it home with them.”

And, she discovered, incivility had a physical impact.

“Then the second thing was my dad. He had had two toxic bosses. Even though he tried to protect me from learning about how bad that was, he ended up in the hospital with a heart attack scare,” she said.

Porath notes that civility has been declining for years.

“When I started studying it about 1998, it was less than 25 percent of people were affected by this on a weekly basis, and those numbers most recently hovered over 50 percent—meaning more people are experiencing or witnessing disrespectful, rude behavior in the workplace these days.”

She conducted surveys, asking people “Why are you uncivil?”

“Over 60 percent of people say, ‘Because I’m overwhelmed or stressed.’ People are asked to do more with less resources. The other thing is technology. The fact that people communicate so often now with emails and other forms of technology, it makes being civil tougher in a sense that you don’t have the nonverbal cues, you don’t have the tone of voice. So typically there are more misunderstandings with technological communication,” she said.

To avoid those sorts of misunderstandings, Porath recommends that you do not send an email if you’re feeling stressed, angry or can’t solve a disagreement. If you’re not sure how your humor, sarcasm or criticism will be received, reread, rethink and resist the temptation to hit send. And if you are uncertain about your tone, save the message and review it later with a fresh perspective before sending it. If you have to get something off your chest, write your note now but maybe send it later using delayed delivery. Finally, she suggests trying to have a phone call, or Skype, or meet face to face under those circumstances.