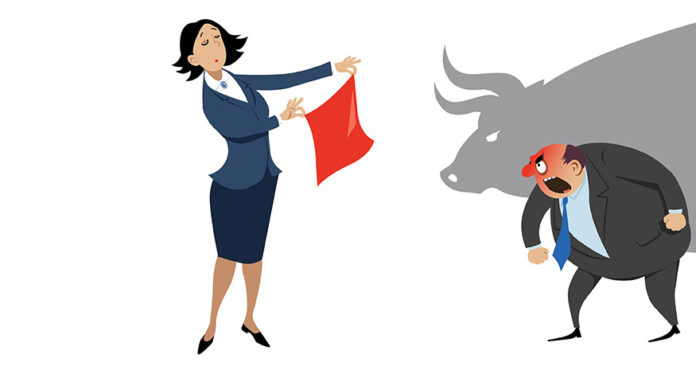 This flip approach is based on the understanding that power structures within organizations are malleable over time. Power at its core arises from dependency. The more one depends on another for reaching goals and gaining resources, the less power one has in the relationship.

Subordinates at work may depend on supervisors for promotions, raises, training, and high-profile assignments. But subordinates still have leverage. In most cases their supervisors rely on them for expertise, ideas, and work performance.

We examined abusive supervision and the influence of these power-balancing operations in two field studies. In the first study, we tracked 219 leader-follower dyads in three waves at a real estate firm. We waited four weeks between each wave to synchronize with monthly performance reviews and allow time for power dynamics to evolve. Each wave included surveys of supervisors and subordinates, along with randomly selected coworkers to provide third-party observations. In the second study, we tracked 363 supervisor-subordinate dyads at a commercial bank, extending the lag between each survey to six weeks.

Both studies confirm power imbalance in favor of the supervisor as a root cause of abusive supervision. In addition, without effective intervention, abusive behaviors tend to persist over time. Further, only one of the two types of power-balancing operations works in reducing abuse and promoting reconciliation from the supervisor.

Decreasing dependence on an abusive supervisor (avoidance) creates safe distance for the subordinate. But this does not motivate the supervisor to reform.

Increasing a supervisor’s dependence on the subordinate works better to break the spiral of abuse. Only then does self-interest kick in and drive positive change. This happens naturally when a supervisor recognizes a subordinate as instrumental for goal and resource attainment.

The first is value enhancement, which occurs when subordinates make themselves indispensable to their supervisors’ goals and resources.

Consider the example of Matthew, an employee often ridiculed by his supervisor. In a team meeting, Matthew realized that his boss wanted to develop a new analytical procedure. Motivated to shift the power dynamics, Matthew invested effort in acquiring knowledge about the procedure and became an expert on it. He also helped coworkers get up to speed. As he demonstrated his value, his supervisor withdrew from abusing him and became more attentive to his needs.

Subordinates looking for similar reconciliation can start by gaining a good understanding of their supervisor’s goals, needs and pain points. Then they can acquire specific competencies and resources not only valuable to the supervisor but also difficult for the supervisor to obtain elsewhere. Finally, they can help their supervisors solve problems and achieve goals in a timely manner. All of these actions require subordinates, despite hard feelings from strained relationships with their supervisors, to stay positive, keep skills up to date, and contribute above and beyond the call of duty.

The second strategy is coalition formation. This occurs when abused subordinates enlist support from colleagues on their team who already have leverage with the boss. Abusive behavior against isolated targets tend to stop once the supervisor realizes it can trigger opposition from the entire coalition.

Consider the example of Anne, who applied this strategy to stop hostile comments from her supervisor. Anne formed a coalition with a valued colleague on her team, and together they presented themselves as a single, cohesive unit. Motivated by self-interest, the boss started treating Anne better to maintain support from her ally.

Taken together, value enhancement and coalition formation send a strong message to the supervisor: “You need me more than you think, so take better care of me.”

None of this suggests that abusive behavior from a toxic boss is the follower’s sole responsibility to repair. Further, we recognize that many issues leading to abusive supervision demand organization-level interventions. But follower-centric solutions belong in the conversation.

The traditional fight-or-flight response is reflexive, visceral, and does little to mend damaged relationships. Targets of abuse, however, can be deliberate, proactive, and strategic in effecting positive change. Subordinates who work to flip the predator-prey script can open doors to win-win-win outcomes for themselves, their supervisors, and their organizations.