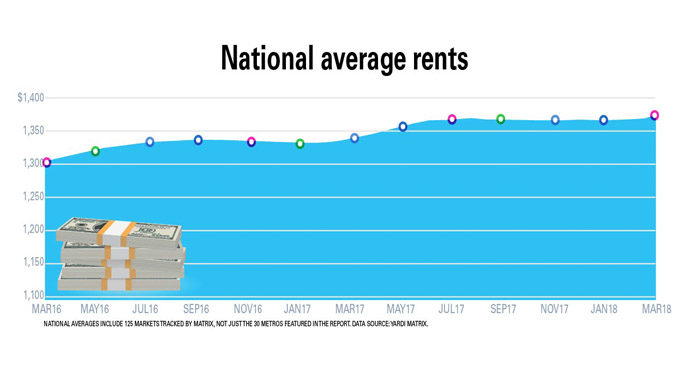 The Yardi Matrix monthly multifamily report for March was released this week. It shows, that while rents rose nationally in March, the rate of apartment rent growth is lower than it has been in recent years.

The report shows that, when looking at the nation as a whole, the trend for rents in the last two years has been for them to start rising around March and to plateau around July. They then remain relatively stable until the next March when the pattern repeats. The process seems to be under way again this year, with rents up $4 in March to a national average of $1,371.

The report indicates that the recent peak in the rate of apartment rent growth occurred a year or two ago, depending on the local rental market. It attributes the recent decline in the rate of rent growth to a parallel decline in the apartment occupancy rate. The addition of 620,000 units to the rental stock nationally over the last two years is cited as a primary reason for the latter decline.

Looking ahead, the forecast addition of 360,000 more units to the market in 2018 may put additional pressure on occupancy and rent growth this year. However, strong growth in the job market will act to support the rental market.