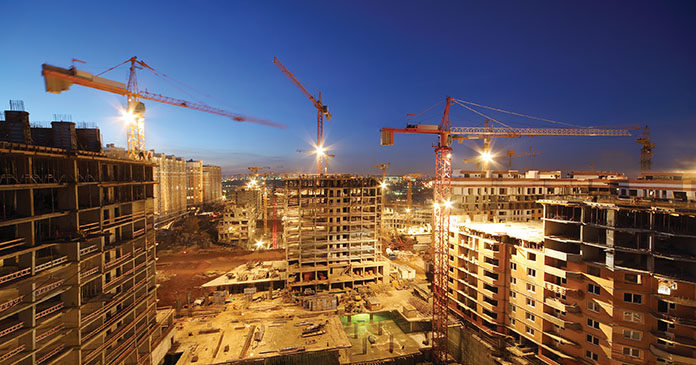 Developers in the U.S. built 358,000 units of new multifamily housing in 2017. That’s less than half the number of single-family homes built last year, but the gap between the two has narrowed a lot over the past decade. And while the current pace of single-family housing construction is still way below its pre-housing-crash norm, those 358,000 multifamily units were the most built in a year since 1989.

This generally seems like a healthy development, given that household sizes in the U.S. have been shrinking and housing shortages are most acute in and around big cities where multifamily is often the only realistic option to meet demand. But here’s another interesting bit of data from the annual Characteristics of New Housing data released by the Census Bureau: The new multifamily units that are going up are concentrated in bigger and bigger buildings.

The 187,000 units in buildings of 50 or more units completed in 2017 marked an all-time high—”all time” in this case going back to 1972. Meanwhile, there were only 27,000 apartments/condos/duplexes/whatever completed in buildings of two to nine units, down from a peak of 288,000 in 1973. That’s a pretty amazing contrast, and it says a lot about this country’s housing supply challenges.

Much of the shift has to do with the rise of no-growth, not-in-my-backyard politics since the 1960s. This political movement has been strongest in homeowner-dominated suburbs, and as a result, as BuildZoom chief economist Issi Romem showed in a remarkable study earlier this year, almost all the housing construction in expensive, space-constrained coastal metropolitan areas such as Boston, Los Angeles, New York, San Francisco and Seattle is now happening in and around established urban centers. The residential suburbs of these areas have effectively gone dormant, shunting new construction to the neighborhoods—mostly in or near old urban cores—where the neighbors either don’t object (because they’re in commercial buildings) or don’t have much political clout (because they’re low-income renters), and local elected officials see benefits in a growing population. In such places, big apartment buildings generally make more sense than duplexes.

Another factor is that limited partnerships, limited liability companies, real estate investment trusts and the like have taken over from individuals as the dominant players in multifamily housing, and these institutional investors tend to be more interested in (and capable of) developing big projects than in building fourplexes here and there.

Non-individuals owned 71 percent of all rental units in multifamily buildings and 94 percent of those in buildings with 50 or more units in 2015, when the Census Bureau last asked around, and those percentages have been rising since at least 2001. It’s apparent in the charts (especially the third one) that the shift from small multi-unit buildings to big ones accelerated after the mid-1990s, which happens to be right after the Resolution Trust Corp., the government entity charged with cleaning up the aftermath of the savings and loan crisis, went to great lengths to create an institutional market for such properties.

There is surely also an element of changing consumer taste at work here, with more Americans wanting to live in tall buildings close to amenities, jobs and public transit than was the case 30 years ago. But I don’t think the drop from 498,000 apartments built in two-to-19-unit buildings in 1973 to just 59,000 in 2017 can be explained purely in demand terms. There is clearly a supply problem here.

Why is it a problem? Romem discussed a couple of reasons: “The dormant suburban sea is so vast that if the taboo on densification there were broken, even modest gradual redevelopment—tearing down one single-family home at a time and replacing it with a duplex or a small apartment building—could grow the housing stock immensely. Distributing the necessary amounts of new housing over vast low-density suburban areas instead of just concentrating them in dense hubs would dilute the local impact on neighborhoods. It would make a large increase in housing more palatable vis-a-vis neighborhood character, and more gradual.”

Apartments in two-to-nine-unit buildings also tend to be markedly cheaper than those in bigger buildings, a group of researchers (among them Rafael Bostic, now the president of the Federal Reserve Bank of Atlanta) found last year—although that’s got to be partly just because they also tend to be markedly older. Fourplexes in the inner suburbs also might simply be a better fit for many families seeking housing than high-rises next to downtown or single-family houses in the distant exurbs, and there are those who argue that dense but relatively low-slung neighborhoods are more conducive to community and economic interaction than high-rise districts, not to mention more aesthetically pleasing.

A few local policy makers have taken note of these arguments. The Seattle City Council will be voting in a few months on a modest up-zoning plan intended to encourage more small-scale construction in residential neighborhoods. The new mayor of Minneapolis is pushing a plan to allow apartment buildings of up to four units pretty much anywhere in the city. Notably, though, Seattle and Minneapolis are big cities, albeit cities covered mostly by block after leafy block of single-family housing. I am not aware of any great wave of suburban up-zoning in the offing. And so as more apartments get built in the U.S.—and I hope lots more do get built—it looks like most of them are going to be in big buildings.

Author: Justin Fox is the author of “The Myth of the Rational Market.”