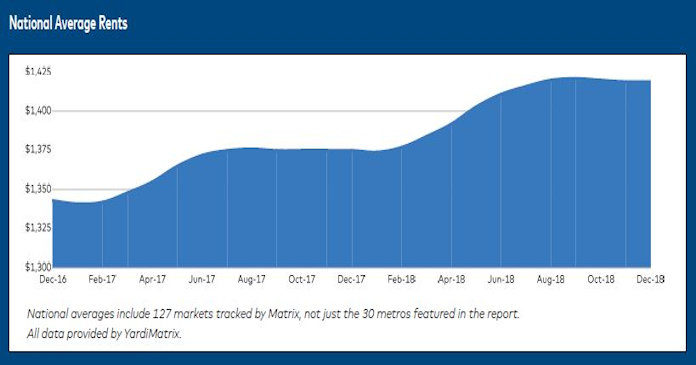 Yardi Matrix and RealPage have issued their year-end reports on the multifamily housing market. The reports paint similar pictures of a market with rent growth higher than the general rate of inflation and occupancy rising despite strong deliveries of new units.

Yardi Matrix reported that the average rent nationwide, $1419, was unchanged in December when compared to the month before. Yardi Matrix said that rents were up 3.2 percent from December, 2017, slightly less than the 3.3 percent increase reported by RealPage.

Note that the all-items consumer price index was up 2.2 percent on a year over year basis through November, so rents are continuing to increase at a slightly faster pace than prices generally.

Despite 2018 being the fourth year in a row of very strong deliveries of new units, both reports found that the apartment occupancy rate had risen during the year, reaching 95.4 percent nationally. RealPage noted that the number of occupied apartments climbed by 323,290 units during the year while the number of new units completed was only 287,007. Yardi Matrix noted that the formation of 1.1 million households per year, strong job growth, an increasing number of people in the prime apartment renting age range and young people’s inability to save for a down payment on a house due to high student loan debt all point to continued strong demand for apartments in the year ahead.

Both Yardi Matrix and RealPage expect deliveries of new apartments to be around 300,000 units in 2019.

The Yardi Matrix report provides forecasts of rent growth in major markets in 2019. It projects that Sacramento will jump to the top of the rent growth list with an estimated increase of 6.5 percent. The Inland Empire is expected to come in second at 4.5 percent with Dallas, Orlando, and Las Vegas rounding out the top five.

The complete reports have information about smaller markets and the Yardi Matrix report also discusses the difference in performance between asset classes.