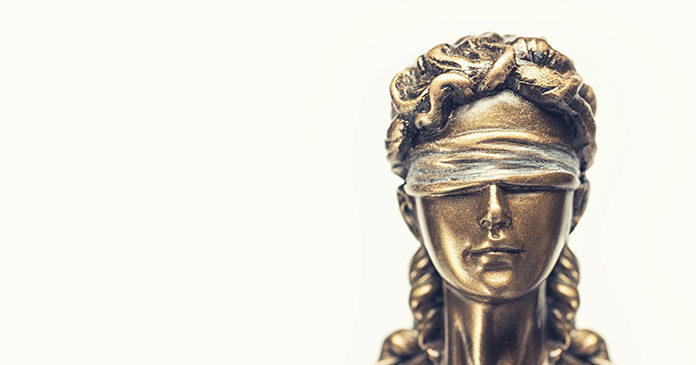 “No state shall make or enforce any law which shall abridge the privileges or immunities of citizens of the United States; nor shall any state deprive any person of life, liberty, or property, without due process of law; nor deny to any person within its jurisdiction the equal protection of the laws.” —Section 1, Amendment XIV, U.S. Constitution

“A theory of liability that prohibits an employer from using a facially neutral employment practice that has an unjustified adverse impact on members of a protected class. A facially neutral employment practice is one that does not appear to be discriminatory on its face; rather it is one that is discriminatory in its application or effect.” —the definition of “disparate impact.”

For years, many Americans have been unable to reconcile the Constitution’s demand for equal treatment with a theory whereby “discrimination” is defined solely by statistical outcomes as they relate to a protected class. In what might be the most ambitious effort undertaken by the Trump administration to date, White House officials are reportedly planning to ban disparate impact.

According to a bombshell report by Paul Sperry, White House Budget Director and interim Chief of Staff Mick Mulvaney is the prime mover of “a proposed executive order, originally drafted by two conservative Washington think tanks” that would “repudiate the underlying rationale for scores of regulations and thousands of government lawsuits alleging racial discrimination, resulting in billions of dollars in fines.”

Disparate impact was engendered by the Supreme Court’s 1971 decision in Griggs v. Duke Power Co. Using Title VII of the Civil Rights Act of 1964 as their vehicle, black American employees sued the power company, challenging its requirement that one must posses a high-school diploma or pass intelligence tests as a condition of employment in, or transfer to, jobs at the plant, even though those requirements were not intended to determine or measure job-related performance. The Supreme Court of the United States (SCOTUS) found in favor of the employees, and further determined that Title VII “proscribes not only overt discrimination, but also practices that are fair in form, but discriminatory in operation.”

In a 5-4 ruling in 2015, SCOTUS reaffirmed disparate impact in Texas Department of Housing & Community Affairs v. The Inclusive Communities Project, Inc. The Court agreed with the non-profit’s assertion that the state housing department “segregated housing patterns by allocating too many tax credits to housing in predominantly black inner-city areas and too few in predominantly white suburban neighborhoods.” Thus, SCOTUS once again endorsed the idea that statistics trumped intent.

So why challenge the law now? Sperry asserts that “conservative opponents of the doctrine believe the currently constituted high court would uphold an executive order doing away with it.”

How ironic. For decades, leftists have viewed an activist Supreme Court— empowered by a “living” Constitution—as their ultimate vehicle for implementing policies they could not get through state legislatures or Congress—all while many warned that such activism cuts both ways.

Yet there is more than activism involved here. While some claims of discrimination are obviously legitimate, Sperry explains that the Left has used disparate impact as a “social-engineering weapon aimed at equalizing outcomes and extending the government’s power over the private sector.”

Two of those incarnations were devastating. In one, when the federal government pressured banks to relax loan standards for minority applicants to avoid charges of racism, that effort fueled the 2008 financial meltdown.

How much pressure? At one point, “valid” income considerations for obtaining a mortgage included welfare payments and unemployment benefits.

The other incarnation? An Obama administration that sued hundreds of schools for disciplining black students at higher rates than whites—while ignoring the inconvenient reality that black students committed more infractions—precipitated the Florida-based PROMISE program. PROMISE sought to limit the number of minority-student interactions with the criminal-justice system by exempting 13 specific misdemeanors from police involvement. As a result, the Parkland assailant was able to obtain the weapon with which he killed 17 students and wounded 17 more at Marjory Stoneman Douglas High School last year.

Regardless, the battle to do away with this pernicious concept will be fierce. “The attack on disparate impact is the latest in a series of Trump administration assaults on civil rights,” asserts Sarah Hinger, an ACLU Racial Justice Program staff attorney. “As the nation continues its long march toward equality, it would be outrageous to destroy such an important means of advancement—one the civil rights bar still depends on to make its case in court,” declares the New York Times editorial board. “Donald Trump wants to make racism OK unless someone can prove the accused party intended to discriminate against them,” claims columnist Michael Harriot.

That would be proof—as opposed to a legally enforceable presumption of racism.

Roger Clegg, president of the Center for Equal Opportunity, a conservative think tank, sees the absurdity of such assertions. “The disparate-impact approach requires decision-makers to make decisions with an eye on race,” he states. “That is exactly what the civil rights laws are supposed to prohibit.”

Instead, the Obama administration forced the issue. The Equal Employment Opportunity Commission (EEOC) discouraged employers from checking a job applicant’s criminal records because that had “disparate impact” on black men whose incarceration rate is seven times higher than that of whites. In one egregious case, auto manufacturer BMW paid $1.6 million in relief to 56 black Americans with criminal records it turned down for jobs. The feds also forced the company to ignore criminal charges against any job applicant, even if they included violent felonies.

In another case, auto lender Ally Financial was fined a record $98 million by the DOJ and the Consumer Financial Protection Bureau (CFPB) for refusing to admit bias against minority borrowers. Yet in subsequent congressional testimony, the CFPB admitted it didn’t even factor credit scores of minority applicants into its investigation, despite many studies showing they are the most reliable indicators of potential loan defaults.

Yet the beat goes on. New House Banking Committee Chairwoman Maxine Waters (D-Calif.) has promised to take on “dishonest and criminal” banking officials who don’t loan out enough money in low-income urban areas. New House Education Committee chairman Rep. Bobby Scott (D-Va.) wants to expand the Title VI statute to include disparate impact and precipitate more lawsuits, while Rep. Sheila Jackson Lee (D-Texas) of the House Judiciary Committee promises to use it as a vehicle to engender reparations for slavery.

“If you don’t favor using the disparate impact approach in civil-rights enforcement to the nth degree, then you are a ‘racist,’ and the mainstream media can be counted on to accept this narrative uncritically,” said Clegg.

The American public? The bet here is the race card is “maxed out,” and that color-blindness, equal opportunity and meritocracy still resonate with a majority of the electorate. The same majority increasingly tired of the idea that the rights of specific groups supersede those of individual Americans, and that those groups are apparently entitled to equality of outcome, not opportunity.

Author Arnold Ahlert has been a columnist for the New York Post for the past seven years.

The Closer is a forum for provocative thought relating to the multifamily housing industry. The views herein do not necessarily reflect those of the magazine.