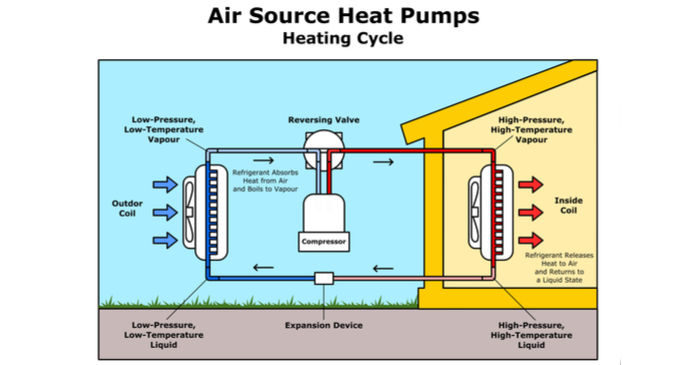 A new report seeks to build support for eliminating the use of fossil fuels within buildings in California.

In the wake of the introduction of the “Green New Deal” (GND) at the national level, a group called the Building Decarbonization Coalition has issued a report titled “A Roadmap to Decarbonize California Buildings”. Like the GND, the report is largely aspirational. It defines a problem and discusses how it may be addressed without being too specific about the approaches to be used or the costs involved.

Currently, buildings account for 26 percent of end use greenhouse gas emissions in California. This is largely due to natural gas being the dominant fuel for space and water heating. However, significant amounts of gas are also used in clothes washing and drying, dishwashing, cooking and pool heating.

All of the above uses of natural gas could be met with electric appliances. Electric-powered heat pumps could be used in space and water heating, electric washers and driers could be used for laundry and electric ranges could replace gas ranges for cooking. Of course, electric power generation also results in green house gas emissions, but that is an issue that is being worked on and it is outside the scope of the report.

The report proposes that building codes be amended to require zero on-site emissions in buildings. It suggests that this mandate be put in place for residential buildings by 2025 and for commercial buildings by 2028. Gas appliances could not be used in new construction after those dates.

The report does not call for immediately retrofitting existing buildings to replace their gas-fired appliances. It suggests that conversion to electrical appliances take place when the current devices reach end of life.

Lack of consumer demand is cited as an impediment to achieving the decarbonized building future. The report calls for a long-term financial support program to be put in place with rebates and subsidized financing to defray the up-front costs of building to carbon-free standards. It also calls for additional subsidies for low-income households. It does not assess how large these subsidies would have to be in order to make the switch to carbon-free appliances attractive to consumers or where the money for the subsidies would come from.

For building retrofits, the lack of electrical panel capacity is acknowledged as an issue. All of the new electrical appliances will put a load on a building’s wiring infrastructure that it was not designed to handle. The report calls for another statewide program to address this issue and suggests that it be coordinated with an effort to promote electric vehicle adoption, another technology change may require an electrical panel upgrade.

Other carrots suggested in the report are things like marketing programs to raise customer awareness and certification programs that recognize best practices.

The sticks are harder to identify. The report uses phrases like “Support builders’ move to decarbonization through policies, programs, permitting and other solutions.” This could mean anything from a reduced cost or expedited permitting process for a decarbonized building to changing building codes so that only carbon-free building could get permits.

The report calls on California’s governor to set up an inter-agency task force to take action on the recommendations it contains.

Owners or operators of residential and commercial buildings in California should pay attention to how this progresses so that their interests are represented when the decarbonized building future is being planned.