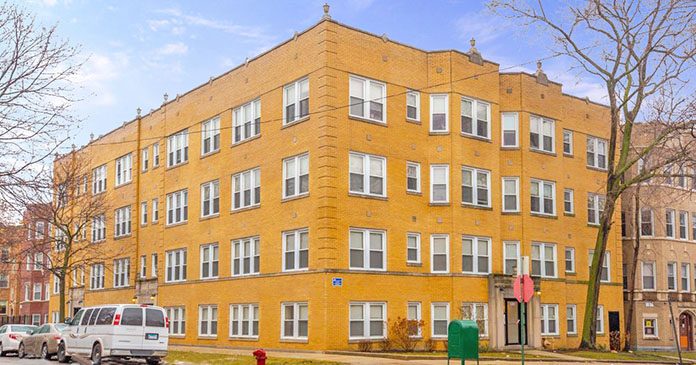 Interra Realty, a Chicago-based commercial real estate investment services firm, today announced it brokered the off-market sale of a 19-unit multifamily property at 2035 W. Arthur Ave. in Chicago’s West Rogers Park neighborhood. The property sold for $2.8 million, or nearly $150,000 per unit, a strong price for the Rogers Park submarket, according to CoStar.

“Rogers Park remains attractive to renters and buyers alike because of its relative affordability,” said Feldman. “We’ve seen an uptick in activity in this pocket of West Rogers Park near Devon as people discover the area’s high-quality, plentiful housing stock. Investor appetite is especially strong for assets that are either candidates for redevelopment or, in this case, recently renovated, as they’re able to capitalize on continued rent growth. Given the strong fundamentals, we expect sales velocity to hold steady through the second half of the year.”

Built in 1928, 2035 W. Arthur is a four-story, 20,000-square-foot building with a mix of 16 two-bedroom and three three-bedroom units. Apartments were last renovated in 2012 as part of a gut rehab and feature hardwood flooring, updated kitchens and baths, in-unit laundry and individual heating and air conditioning systems. The units were fully occupied at the time of sale.

By leveraging his extensive network of buyers, including those targeting North Side investments, Feldman was able to arrange 25 tours that resulted in six written offers. The prospective buyers included both in- and out-of-state investors, including buyers from the coasts, who continue to be interested in Chicago’s neighborhoods.

The sale of the Arthur Avenue property translated to a capitalization rate of 6.9 percent, delivering a higher first-year return than many assets in more centrally located submarkets despite the strong per-unit price that was realized.

2035 W. Arthur is located less than 10 miles from Chicago’s downtown, accessible via Lake Shore Drive, the CTA Red Line or Metra UP-N line. In addition, it is a short walk from the No. 155 bus route along Devon Avenue, as well as Chicago’s Little India district, featuring a range of shops and restaurants.

Founded in 2010, Interra Realty is a Chicago-based commercial real-estate investment services firm that delivers integrated, tailored solutions through its boutique, client-focused approach and team of experienced professionals. Since its inception, the firm has closed thousands of transactions valued in excess of $1 billion spanning the multifamily, office and retail sectors, as well as loan sales. Interra’s clients range from private investors and high-net-worth individuals to large financial institutions, private equity groups and hedge funds.