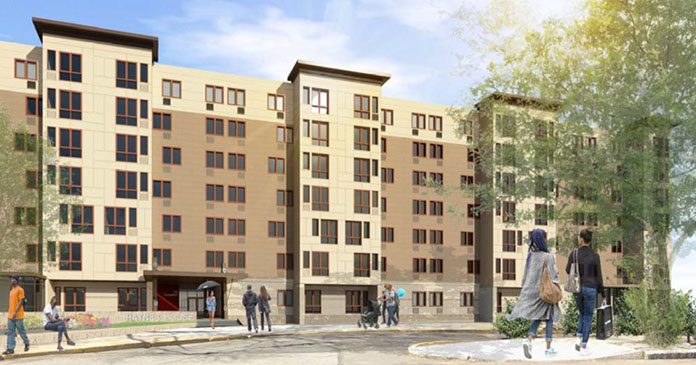 MassHousing has closed on a total of $32.8 million in affordable housing financing to the Madison Park Development Corporation (MPDC), for the preservation of affordability and property rehabilitation at the 131-unit Haynes House in Roxbury. The MassHousing refinancing will extend affordability for households with a range of incomes in perpetuity, following the expiration of previous affordability restrictions with the maturation of the property’s former Section 13A mortgage in 2017.

“We are very pleased that Madison Park Development Corporation was committed to not only ensuring that the affordability at Haynes House will be preserved for its residents, but also to investing in significant property improvements that will allow the property to remain a top-quality source of affordable housing long into the future,” said MassHousing Executive Director Chrystal Kornegay.

“Haynes House is a final phase of a preservation strategy for Madison Park Village. It enables us to achieve our mission of supporting a vibrant and healthy Roxbury and we look forward to achieving positive outcomes for the building and the people who live there,” said Jeanne Pinado, Madison Park Development Corporation’s Chief Executive Officer.

MassHousing is providing MPDC with a $9 million construction and permanent loan, a $21.4 million bridge loan, and $2.7 million from the Agency’s $100 million Opportunity Fund as part of the effort to refinance Haynes House following the maturation of the Section 13A loan.

The transaction also includes a total of $17.2 million in federal Low-Income Housing Tax Credit equity allocated by the Massachusetts Department of Housing and Community Development (DHCD), $4.3 million in Section 13A financing from DHCD, a $13.3 million seller note and a $1.7 million deferred developer fee.

The Commonwealth’s Section 13A program was created by the Massachusetts Legislature in the 1970s to provide low-interest mortgage financing to affordable housing communities. Today, 13A communities serve some of the lowest-income and most vulnerable populations in Massachusetts, including many elderly residents. The mortgages on these 13A housing communities are nearing maturity, and no federal resources are available for their preservation. In response, MassHousing and DHCD have committed a total of $100 million in capital to help protect vulnerable residents and preserve affordable 13A units that otherwise could convert to market rates.

In addition to preserving and extending the affordability at Haynes House, MPDC has commenced significant property improvements totaling $20 million, including building envelope and façade renovation, apartment and common area upgrades, and the construction of accessible apartments.

The general contractor is Dellbrook Construction, the architect is Davis Square Architects, and the property manager is WinnCompanies.

MassHousing has financed or manages the rental subsidy at 69 rental housing communities in Roxbury involving 7,368 housing units and $337.8 million in MassHousing financing. The Agency has also provided 8,373 home mortgage loans to Boston homebuyers and homeowners totaling more than $1.1 billion in financing.

Since 1966 MPDC has been an important leader in the revitalization of Roxbury and Dudley Square. As one of the first resident-led organizations to develop affordable housing, it has a well-respected track record of producing high-quality housing that is affordable to low and moderate-income families. It has developed 1,252 homes that house more than 3,000 residents. MPDC is a proven leader in community driven housing and economic development and provides a wide array of community and arts programs that seek to support a vibrant, healthy Roxbury neighborhood.

MassHousing (The Massachusetts Housing Finance Agency) is an independent, quasi-public agency created in 1966 and charged with providing financing for affordable housing in Massachusetts. The Agency raises capital by selling bonds and lends the proceeds to low- and moderate-income homebuyers and homeowners, and to developers who build or preserve affordable and/or mixed-income rental housing. MassHousing does not use taxpayer dollars to sustain its operations, although it administers some publicly funded programs on behalf of the Commonwealth. Since its inception, MassHousing has provided more than $23.9 billion for affordable housing.