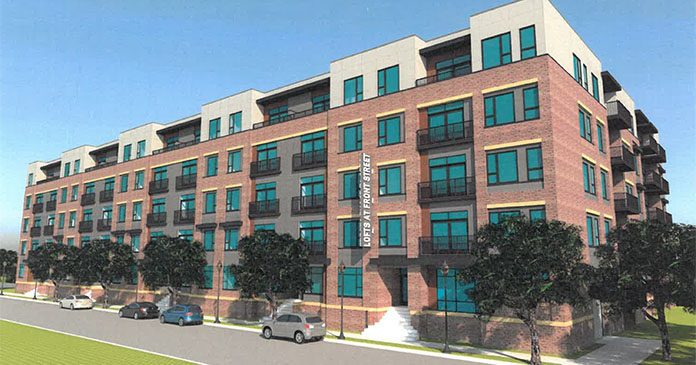 Colliers International’s Norfolk office is pleased to announce the sale of the 4.19-acre parcel at 533 Front Street in Norfolk from Moon Engineering Co. Inc. to The Breeden Company, Inc. for $3.3 million.

Breeden Construction will build the 258 unit, five-story multifamily development with an internal parking garage consisting of 387 dedicated spaces. Breeden Property Management will manage the mixture of studio, one-, two- and three-bedroom residences with stunning views of the Fort Norfolk waterfront with a pedestrian walkway along the Elizabeth River that enhances the boundary of the property along with renovations to the shoreline.

The prime waterfront parcel sits along the Elizabeth River. Once described as the last frontier in Norfolk, the Fort Norfolk area has potential to become a vibrant part of the city and a prominent addition to its waterfront offerings. The master plan shows a mixed-use waterfront neighborhood, rich in character, containing diverse housing and employment options along with supporting uses. The neighborhood is adjacent to Sentara Norfolk General Hospital, EVMS, Harbor’s Edge, Children’s Hospital of the Kings Daughters, People for the Ethical Treatment of Animals, the Elizabeth River Trail and other residential offerings.

The master plan also shows improvements to the environment around the historic Fort Norfolk, for which the district is named, including a waterfront park, promenade and anchorage for boats and ships. Streets and walkways will lead to the waterfront, which will remain public and accessible to all.

“This is an ideal development site,” said Ken Benassi, SIOR, senior vice president with Colliers International. “Zoning changes brought some challenges in marketing the parcel, but this announcement will set the pace for the future of this neighborhood.”

Benassi also highlights the site’s proximity to employers, downtown Norfolk and the accessibility of public transportation. A park-and-ride for The Tide was built nearby in 2012.

“The complex design structure of the project and the growth potential of the area sparked our interest,” said Timothy A. Faulkner, chief operating officer of The Breeden Company. “We look forward to developing this project in the City of Norfolk and providing an exceptional product to potential residents.”

Moon Engineering Co. Inc. was founded in 1920. William Thomas Sr. moved the company from Norfolk to Portsmouth in 1987. Thomas passed away in 1992, and his sons sold the company to Earl Industries in 2004. Since the late 1980s, the site was leased to Great Lakes Dredge & Dock until it became vacant for the last several years.

Colliers International is a leading global real estate services and investment management company. With operations in 68 countries, our 14,000 enterprising people work collaboratively to provide expert advice and services to maximize the value of property for real estate occupiers, owners and investors. For more than 20 years, our experienced leadership team, owning more than 40 percent of our equity, have delivered industry-leading investment returns for shareholders. In 2018, corporate revenues were $2.8 billion ($3.3 billion including affiliates), with more than $26 billion of assets under management.