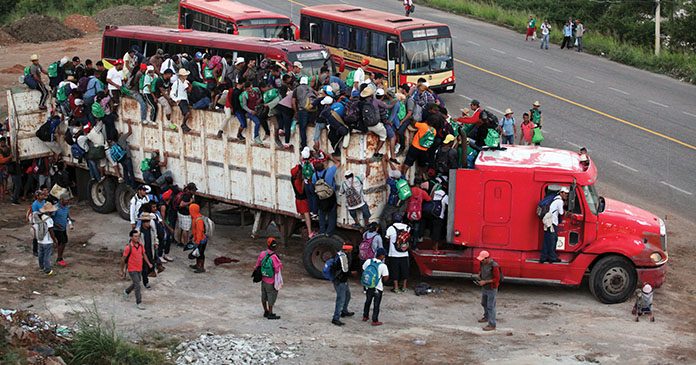 The President’s plan has two parts.

First, it recognizes that full border security is the bedrock of any functioning immigration system and proposes functional, operational, and structural reforms to strengthen America’s border infrastructure and laws.

The President’s plan creates a permanent, self-sustaining border security fund. Paid for with fees and revenues generated at ports of entry, the trust fund will ensure that law enforcement officers never have to wait on Congress to give them the resources to do their jobs. It would also make certain that 100 percent of people and goods entering the U.S. are properly inspected at ports of entry. The plan will facilitate quick completion of barrier construction in strategic locations and combat visa overstays through legal and infrastructural enhancements.

Loopholes in U.S. immigration laws are driving a flood of human smuggling and other fraudulent activities along the southern border. Trump wants to expedite relief for legitimate asylum seekers—and send those who abuse the system home promptly.

About 70 percent of immigrants who come to the U.S. today are admitted based on family relationships or through a random visa lottery—a system that favors random chance over the skills our economy needs.

Through a point-based merit system, the President’s plan increases the number of legal immigrants selected based on skill or merit from 12 percent to 57 percent. The plan also has layers of protection for American jobs and wages, including recruitment requirements, displacement prohibitions, and wage floors.

The President’s plan is designed to attract immigrants who are ready to integrate into America’s melting pot. Before being able to apply, green card applicants must pass a U.S. civics exam and demonstrate English proficiency. The plan gives priority to young applicants who are likely to build long-term ties and contribute to our society over their lifetimes.

Prioritize the immediate families of U.S. citizens and new immigrants

No matter where in the world someone is born or who their relatives are, if they want to become American, they should face the same standard as anyone else applying. The “Build America Visa” will use a clear, fair point-based criteria—one that prizes extraordinary achievement and potential to contribute to our Nation—to determine who should be issued a green card for permanent residence in the United States.

The big idea in President Trump’s plan is that “pro-America” and “pro-immigrant” are synonyms. Illegal immigration hurts everyone. A random, unfair entry process hurts everyone. Underfunded law enforcement hurts everyone. Fixing these things will make life better for our citizens while increasing the odds dramatically that new immigrants are put in the best position possible to succeed.

It’s revealing that the only ones opposed to a safer, stronger immigration system are special interests who profit off the horrible status quo. Those forces against change include everyone from the corporations who exploit cheap, illegal labor to the career politicians who benefit from never solving the issue. The inertia against reform is powerful, but Americans across the spectrum delivered a strong rebuke to Washington “business-as-usual” when they elected President Trump in 2016.

“Many of the Democrats have claimed to be for these concepts at different times in their careers and, in many cases, in very recent history,” President Trump said on Thursday. “And I hope that they will end up joining me and all of the people gathered together today in putting politics aside, putting security and wages first, and pursuing these historic reforms.”

The moment in here

America has not seriously reformed its legal admissions system in more than 50 years, since Lyndon Baines Johnson was less than two years into his tenure as President. As a result, the developed world today from Canada to Australia is outpacing the U.S. with modern immigration systems that attract the best talent and offer the most opportunity of anywhere on Earth.

The United States was once the melting pot of the world. It’s time to restore the American Dream for everyone—citizens and newcomers alike—with an immigration system that works.