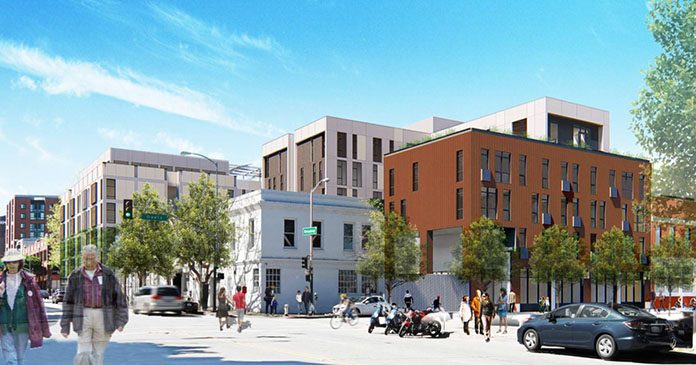 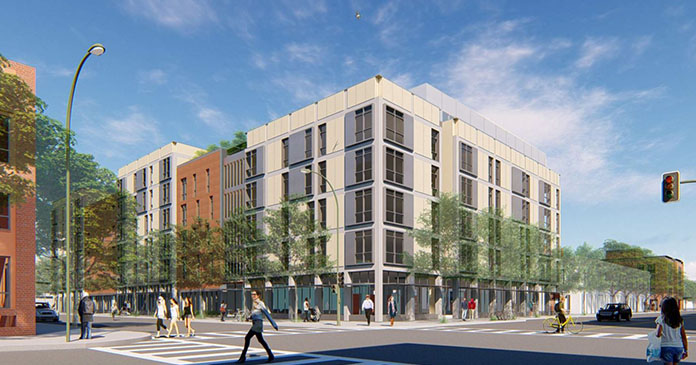 88 Broadway is currently a surface parking lot owned by the Port of San Francisco on a parcel remaining from the former Embarcadero Freeway. 735 Davis is a former San Francisco Public Works parking lot that was transferred to the Mayor’s Office of Housing and Community Development through the City’s surplus land ordinance to make developable sites available for affordable housing on public lands.

“88 Broadway and 735 Davis are a model for taking underutilized land and turning it into what we need most in this city—100 percent affordable housing,” said Mayor London Breed. “The $600 million Affordable Housing Bond, which will go in front of the Board of Supervisors this afternoon, will allow us to provide housing for our most vulnerable residents, including seniors, formerly homeless individuals, veterans, educators and low-income families.”

With a particular focus on meeting the housing needs of the immediate neighborhood, 88 Broadway and 735 Davis’s units will be available to future tenants—including formerly homeless seniors—with incomes ranging from 0 percent to 120 percent of Area Median Income. This vibrant mixed-income community will also feature a childcare center operated by the YMCA, a restaurant space, and a public walkway connecting the two sites.

In October 2018, Mayor Breed announced a $1.5 million investment to make 88 Broadway and 735 Davis affordable to very low-income seniors. The funding cuts rents in half for 13 units of senior housing, lowering the monthly rent for a one-bedroom apartment from $1,421 to $710.

In 2018, Assembly-member David Chiu authored Assembly Bill (AB) 1423 to permit the City to build an affordable housing development at 88 Broadway. AB 1423 also clarified that the project could include a childcare facility and a restaurant.

“This is exactly the type of project San Francisco desperately needs, and I am grateful to have a small role in making it happen,” said Assembly-member David Chiu (D-San Francisco). “A bill I authored and passed last year, Assembly Bill 1423, ensured 88 Broadway would include housing for both low-income and middle-income San Franciscans and create an affordable, vibrant community for San Francisco families.”

“I have been advocating for affordable housing on this site for over 20 years,” said Supervisor Aaron Peskin. “The process of getting input from the neighborhood—everyone from the Barbary Coast Neighborhood Association to Chinatown seniors—was critical to making this project better, and ultimately more deeply affordable. With 88 Broadway/735 Davis in mind, President Yee and I have created the first ever Senior Operating Subsidies (SOS) Fund in this year’s budget, to ensure that the majority of seniors who don’t qualify for affordable housing because of their fixed incomes have a chance to live and thrive in District 3. I’m thrilled to see this project finally break ground in a waterfront neighborhood where we have a long history of community-led affordable housing victories.”

“MOHCD would like to thank the many stakeholders who worked so hard to make this project a reality. From the non-profit developers to the neighbors, to Mayor Lee and Mayor Breed, this development truly epitomizes San Francisco as a city for all,” said Kate Hartley, Director of the Mayor’s Office of Housing and Community Development.

“The Port is working to create a thriving waterfront for all San Franciscans and proud to add 125 units of 100 percent affordable housing for families and 53 units for seniors,” said Elaine Forbes, Executive Director of the Port of San Francisco. “88 Broadway and 735 Davis will enrich the waterfront while working to help address the City’s housing shortage.”

BRIDGE Housing Corporation and The John Stewart Company are partners on this multi-building development, and they have enlisted local architecture firm Leddy Maytum Stacy and Cahill Contractors to bring this project to completion.

“This is a rare opportunity to bring a much-needed range of affordability and services to the neighborhood,” said BRIDGE Housing President and CEO Cynthia Parker. “We’re proud to be part of this effort to serve people—from the city’s most vulnerable seniors to working families.”

“Another unique feature of this hybrid development is the combination of some formerly homeless residents plus a cohort known as the ‘missing middle,’ such as nurses, teachers and first responders,” said John Stewart, Chairman of The John Stewart Company.

Both affordable housing developments have been made possible by financing from the San Francisco Mayor’s Office of Housing and Community Development, Bank of America, and the California Tax Credit Allocation Committee. Barings Multifamily Capital LLC contributed to 88 Broadway and the Federal Home Loan Bank of San Francisco contributed to 735 Davis.

ABOUT US
Yield PRO is one of a kind. It's multihousing news and strategy for rental owners and operators seeking to increase their asset value through streamlined processes and best practices. ﻿YP is the only independently-owned, nationally-circulated, exclusively-multifamily magazine in existence today.
FOLLOW US
© 2021 YIELD PRO MAGAZINE
Yield PRO
MORE STORIES
Movers and shakers