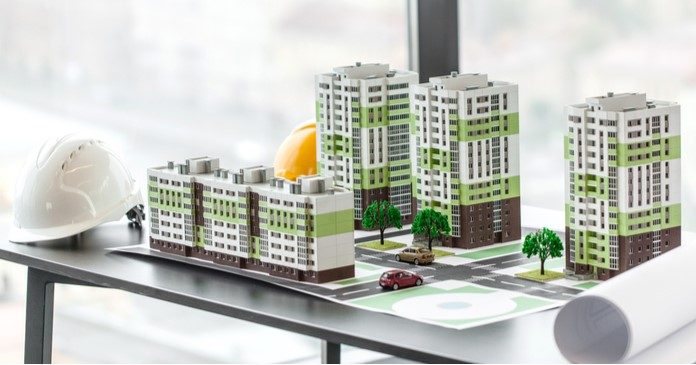 The Census Bureau released its monthly new residential construction report for July 2019. The report was mixed with some strength in the number of building permits issued but with weakness in multifamily housing construction starts and completions.

In addition, 45,000 permits were issued in July for buildings with 2 to 4 units, down only slightly from June’s level and near a recent high. Note that both the City of Minneapolis and the State of Oregon have recently passed laws allowing buildings in this size range to be built as in-fill units in regions formerly zoned for only single-family dwellings. It will be interesting to see if these laws cause an increase in the construction of these units.

Nationally, the three-month moving average for permits issued for multifamily housing in July was nearly unchanged from June’s level, falling less than 1 percent. However, it was up 8 percent from the level of July 2018. This is shown in the first chart, below. 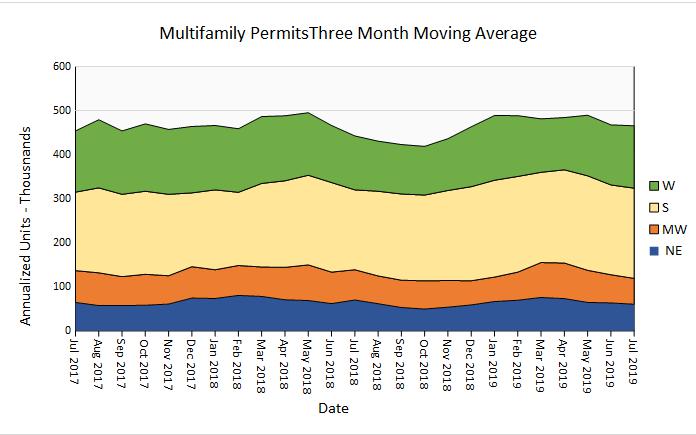 Compared to year-earlier levels, the number of units permitted declined in the Midwest and Northeast but rose modestly in the South and strongly in the West, leading to a net gain in permits.

The July level of multifamily housing construction starts for buildings with 5 or more units was down by 17.2 percent for the month, following a similar decline in June. The 303,000 starts reported for July, on a seasonally-adjusted, annualized basis, is the lowest reading for this metric since August 2017.

Compared to year-earlier levels, construction starts for buildings with 5 or more units were also down, falling almost 5 percent from the July 2018 level.

Multifamily housing construction starts (two or more units per building) were down 7.5 percent from their June levels for the country as-a-whole, based on three-month moving averages. Only the Midwest saw a modest rise in starts. The biggest fall in starts on a percentage basis was seen in the Northeast, where they fell 19 percent. The biggest fall in the number of units started occurred in the South where starts fell by 20,000 units from the June level. However, as the chart makes clear, the decline in starts comes after a recent surge and the current level of starts is in line with recent levels, at least when viewed based on 3 month moving averages.

On a year-over-year basis, starts were up 10 percent for the country-as-a-whole. Starts surged in the Northeast by 28 percent compared to year-earlier levels. Starts were also up modestly in all other regions of the country.

The following chart shows the starts by region for the last 24 months. 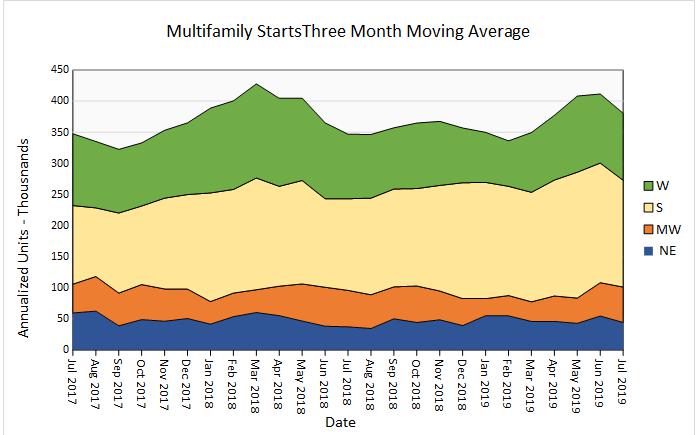 For the country as-a-whole, multifamily housing completions for (two or more units per building) were down 7 percent month-over-month, comparing three-month moving averages. While this is partly explained by the fact that completions are coming off of the spring surge which followed last-year’s autumn decline, the three-month moving average of completions is now also 10 percent below the average rate of the last two years. The Midwest was the only region of the country to see a rise in completions in July, but with a gain of only 1.2 percent. All other regions of the country saw declines in completions, with the Northeast seeing a 26 percent drop.

On a year-over-year basis, the three-month moving average of completions was down by 3.9 percent. By region, the story was mixed with completions falling in the Northeast and South but rising in the Midwest and West.

Completions by region for the past 24 months are shown in the chart below. 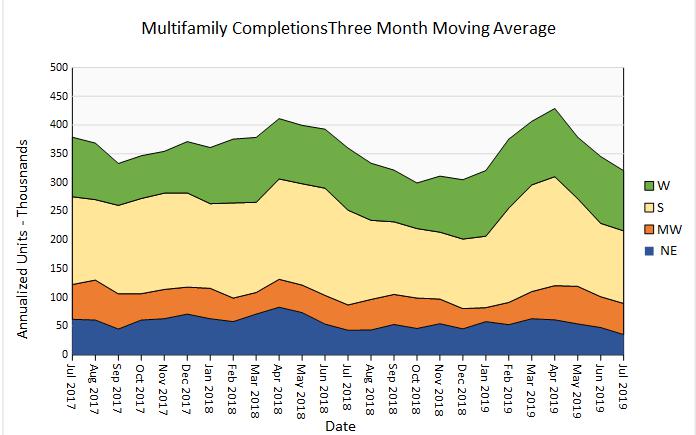