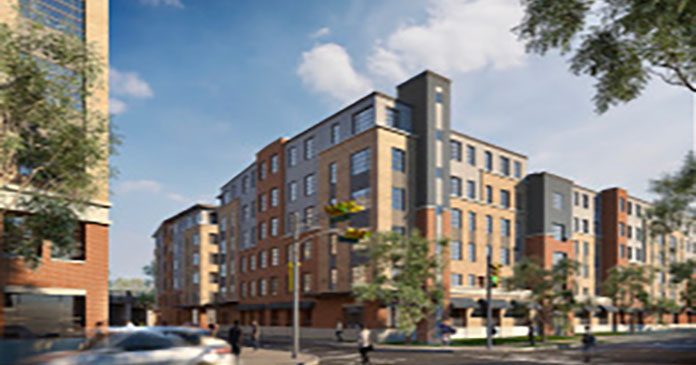 PEEK Development (PEEK) has concluded its initial fundraising round for two Qualified Opportunity Fund (QOF) projects in the pre-construction phase in the City of Orange. PEEK Reock I QOF, LLC and PEEK Reock II QOF, LLC are slated to break ground next year on two separate apartment-rental properties of 50 and 118 apartment-home units, respectively, within the city’s Reock Street Redevelopment Area (RSRA).

Strategically situated just one block from NJ Transit’s Orange Station and the Main Street Business District, the planned developments align with the city’s efforts to revitalize land and property parcels between the NJ Transit railroad right-of-way and Freeway Drive/Interstate 280. The area is bounded by South Essex Avenue to the west and South Center Street to the east.

According to Philip Evanski, PEEK co-founder and managing member of Equis Realty Partners, development costs are expected to be $12.8 million for the 50 market-rate units at 276 Reock St. and $32.2 million for the 118 market-rate units at 49 S. Day St. Both properties are a two-minute walk to Orange Station and offer front-door NJ Transit bus service along Route 92/Orange Crosstown, connecting Newark Light Rail-Branch Brook Park Station to South Orange Train Station.

“In addition to being among one of the first Qualified Opportunity Funds to close its initial fundraising phase within months of launching—and then immediately moving toward breaking ground within an 8-to-12-month timeframe—PEEK is proud of its collaboration with city officials and local residents to revitalize a part of the city that has tremendous untapped potential,” he said.

Emanuel Klein, co-founder of both PEEK and The Fountain Group, noted, “This is yet another step in realizing development within the Reock Street Redevelopment Area to establish a pedestrian- and commuter-friendly city center that will yield a self-sustaining, safe and secure neighborhood over the long term.”

In addition to its two Reock QOFs, PEEK is preparing to launch a third fund, PEEK Cleveland I QOF, LLC. This fund will focus on efforts to develop a 68-unit multi-family property on Cleveland Street. The total cost of this initiative is expected to be $17.3 million.

“The leadership at PEEK Development has a demonstrated track record of partnering with municipalities like Orange, by taking a redevelopment plan’s strategic objective and transforming it into a sustainable reality for the entire community over the long term,” said Mayor Dwayne D. Warren, Esq. “By teaming up with PEEK, Orange will achieve its rightful place as a dominant live/work/transit/retail hub in the East Essex Region.”

Like many transit-centric/high-walk-score cities in North Jersey, the city is leveraging its Orange Train Station as the epicenter of the Reock Street Redevelopment Area to draw prospective out-commuting residents who work in nearby Newark and Midtown Manhattan. Located at 75 Lincoln Ave., the station is a major transit artery for NJ Transit’s Morris & Essex Lines. Eastbound service offers connections to Secaucus Junction and NY Penn Station in Midtown Manhattan with service to Hoboken Terminal. Built in 1918, the brick station depot is listed in state and federal registers of historic places.

“Orange is poised—just like its East Orange and Newark counterparts—for an exciting rebirth and PEEK is pleased to have an important role in its transformation,” added Evanski.

About The Fountain Group

The Foundation Group is a real estate investment, management and development firm focused on multifamily and mixed-use assets throughout North Jersey. The company, which has developed and managed over 700 units, continues to grow its portfolio by focusing on renovations to existing buildings as well as ground-up development. Projects in The Fountain Group pipeline are valued in excess of $70 million.