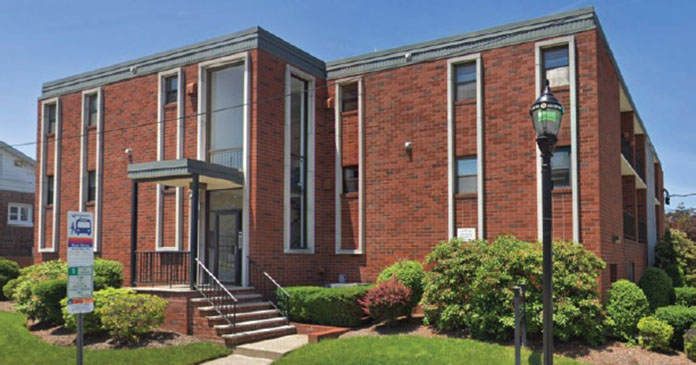 Long considered one of the highest-barrier-to-entry multifamily investment submarkets in the state, the Bergen/Passaic County apartment-property corridor continues to live up to its enduring reputation, according to Gebroe-Hammer Associates. While for-sale product remains scarce—and the investor pool abundant—the firm’s market specialists have recorded a total of $154.3+M in sales encompassing over 839 units since midyear.

One of the latest Bergen County trades involves the sale of Valley West Apartments, located at 245 Valley Rd. in Wood-Ridge, which garnered a per-unit price of $250,000. The transaction was arranged by Executive Vice President Greg Pine, who exclusively represented the owner—the original developer of the circa-1974 building comprised of one medical office and all one-bedroom/one bath layouts—and procured the buyer, a private investor. Senior Vice President Debbie Pomerantz also served as a member of the brokerage team. Previously, Pine represented the same seller/developer in the $8.2M sale of 35 units in Englewood late last year. Executive Vice President Stephen Tragash procured the buyer in that trade.

“While Bergen County was once exclusively known as an affluent suburb of single-family homes, it has since expanded its identity and sense of character to include modern-day transit-focused urban-sophisticate living—a lifestyle once associated with big cities,” said Pine. “As redevelopment and the delivery of new-construction market-rate units around municipal city centers and train stations have fed this decade-long transformation, existing multifamily properties are now considered prime investment-acquisition opportunities because of their inherent value-add and property repositioning potential.”

Examples of this trend are mirrored in five transactions arranged by Gebroe-Hammer’s brokerage professionals during a recent six-week stretch in municipalities like Palisades Park, Maywood and Ridgefield. Each posed an opportunity for new ownership to implement modest capital improvements, primarily to kitchens and baths, in order to achieve upper-percentile market-rate rents and significant property appreciation over the long term.

Similar trends abound in Passaic County, particularly within the southwest quadrant where Gebroe-Hammer has arranged two separate transactions in Clifton involving an average per-unit sale price of $180,455. The borough’s downtown section, defined as Main Avenue extending from the City of Passaic to the Route 45 overpass and at Clifton Avenue from First Street to Lexington Avenue, has been targeted as a Special Improvement District.

“Clifton, southwest Passaic County and the county as a whole—including its county seat of Paterson—have been leaders in the redevelopment and rehabilitation of its existing housing stock,” said Pomerantz, who is the firm’s Passaic County/North Jersey market specialist. “These initiatives have resulted in a dramatic rebranding for dynamic, transit-centric hubs that appeal to a multi-generational tenant demographic, from millennials and families to empty nesters and retirees.”

With a focus on suburban garden-apartment and urban mid- and high-rise properties, Gebroe-Hammer’s geographic areas of concentration are centered in New Jersey and extend to southeast Pennsylvania and southern New York State. The firm is widely recognized for its consistent sales performance and is a 15-time CoStar Power Broker. Other achievements include arranging the largest Mid-Atlantic region multifamily sale (2018) and being named a nationally ranked Multifamily Influencer (2018); one of the nation’s top-25 single multifamily asset sales (2017); and among the nation’s top-25 multifamily brokers (2017).